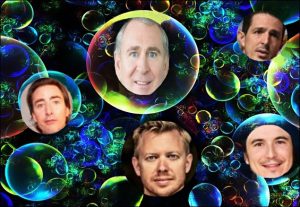 The most striking revelations in yesterday’s House Financial Services Committee hearing on the wild trading action in New York Stock Exchange-listed shares of GameStop came when Congresswoman Cindy Axne of Iowa questioned Vlad Tenev, the CEO of Robinhood, the trading app being increasingly used by young people to trade stocks and options on their mobile phones.

GameStop is the brick-and-mortar video game retailer whose stock soared from $18.84 on December 31 of last year to an intraday high of $483 on January 28 – an unprecedented run of 2,465 percent in four weeks by a struggling retail outlet. Following the spectacular run, GameStop’s share price then quickly plunged back to earth, making its stock chart look like something you would see from a boiler room operation rather than a New York Stock Exchange-listed stock. GameStop’s closing price yesterday was $40.69.

The exchange between Axne and Tenev opened a window into a sick business model on Wall Street that is pumping out billionaires like Citadel’s Ken Griffin while seducing young people with the gamification of trading.

Axne began the questioning of Tenev by stating that her nephew and two of his friends had stayed up to four in the morning to try to get a “piece of the action” in the highflying meme stocks like GameStop and the theatre chain, AMC. This exchange then followed:

Axne: “Right now, what I’m seeing is gambling in the stock market and that’s not a real solution to income inequality and I don’t think we should pretend that it is.

“Just last June when Hertz declared bankruptcy, after that Robinhood was actively pushing the stock on its site, it was trending on Robinhood, and the promotion of that worthless stock I don’t think is good for investors. That’s a gamble that they shouldn’t have taken. That’s just one example…

“Generally, 99 percent of short-term traders underperform the market. So, Mr. Tenev, you say Robinhood’s mission is to democratize finance. Is that correct?”

Tenev: “Congresswoman, like many technology companies we employ data scientists, user researchers, and designers to provide a better customer experience.”

Axne: “So on the specifics, when people sign up they get a scratch-off ticket to see what they get; confetti falls every time they place an order; they get push notifications; they’re encouraged to trade; if a friend signs up they get a free stock. On and on. Why have you added specific gaming design elements to look like gambling to your app that encourages more frequent trading?”

Tenev: “Congresswoman, as I mentioned earlier, we want to get people what they want in a responsible, accessible way. We don’t believe in gamification. We know investing is serious and that’s why most of our customers are buy and hold. A very small percentage of our customers utilize margin.”

Axne: “I appreciate that but you know, folks like my nephew actually aren’t your customer. They’re your product. Your customer is sitting right next to you, Mr. Griffin with Citadel.”

What Axne was referring to was discussed at length earlier in the hearing. Ken Griffin’s Citadel Securities, a so-called internalizer or market-maker, pays Robinhood to send its retail orders to it to execute the trades. While Robinhood has payment-for-order-flow agreements with other internalizers, the bulk of its trade orders are going to Citadel. The vast majority of Robinhood’s revenue stream comes from payment-for-order flow. Thus, its priority would appear to be to please its true customer, Citadel Securities.

The reason that the young people placing trades at Robinhood are viewed as “the product” that Robinhood is selling to Citadel Securities is that Wall Street has long viewed retail orders as the “dumb money” it would like to trade against. That’s because the retail investor is willing to (or oblivious) that they are trading in the dark market offered by internalizers rather than a lit market like the New York Stock Exchange where bids and offers on stocks are publicly displayed.

This sick model is accentuated by the fact that Citadel Securities regularly pays fines for abusing these retail customers and then goes on its merry way to continue to abuse and pay more fines. At the opening of the hearing, Congressman Al Green of Texas stated that Citadel has paid more than $100 million in fines.

We checked Citadel Securities’ record at the Securities and Exchange Commission and this enforcement action jumped out at us.

Citadel Securities has also been fined and censured by multiple regulators for trading ahead of customers’ orders for its own account and failing to properly report trading data to the SEC.

One thing Ken Griffin is clearly highly competent at is spreading money around Washington. As we recently reported, Griffin personally wrote out checks totaling more than $61 million to PACs and Super PACs working exclusively to elect Republicans to Congress in just the most recent election cycle.

GameStop Promoter Keith Gill Was No “Amateur” Trader; He Held Sophisticated Trading Licenses and Worked in the Finance Industry

GameStop Short Squeeze: These Are the Big Wall Street Players Who Stood to Make Billions