How Corrupt Is Wall Street? Two Watchdogs Weigh In 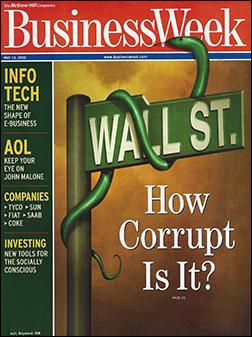 Better Markets and Public Citizen, two of the most informed Wall Street watchdogs, provided written testimony for last Thursday’s hearing before the House Financial Services Committee on the structure of Wall Street. And, to put it mildly, their assessment of the state of affairs on Wall Street does not align with what hedge fund titan Ken Griffin of Citadel told lawmakers at the same hearing. Griffin testified, under oath mind you, that: “The U.S. capital markets are the envy of the world. Our nation’s ability to allocate capital to its best and highest use cr­­­­­eates jobs, drives innovation and fuels our economy.”

In reality, foreign regulators have repeatedly filed enforcement actions against the largest banks on Wall Street for engaging in fraud and rigging markets. As for allocating capital “to its best and highest use,” Better Markets describes the prospects for GameStop, one of the hot meme stocks today, as follows:

“A rudimentary review of GameStop’s financial and business prospects (before the meteoric rise of the stock price) would have yielded the following unmistakable conclusions: GameStop was bleeding revenue in 2019 and 2020; it was closing stores with little to no prospects of re-opening them (even before the COVID-19 pandemic kept people away from shopping malls where many of GameStop’s stores are located); and its most basic business—that of selling and renting hard-disk video games—was under threat from the new generation video game consoles that were no longer equipped with hard-disk readers and instead required gamers to digitally download or stream the games. Yet, none of this prevented millions of investors who were hyped, misled, or manipulated into pouring their hard-earned money into GameStop and similar stocks. And none of this seems to have mattered to Robinhood (and others) who peddled, facilitated, and enabled leveraged and margin investing that some now believe has become so widespread as to have systemic risk implications.”

Better Markets goes on to explain that only the particular context for last Thursday’s hearing is new, but the “trading practices, and obvious vulnerabilities of the U.S. financial system are not.” Better Markets points out the following areas where ongoing abuses are occurring:

“Market participants at the center of these events have for years taken advantage of market fragmentation, order routing schemes, questionable execution practices, and leveraged trading strategies. And even in the current saga, there are reports that some sophisticated participants made hundreds of millions of dollars momentum trading (exacerbating volatility both as the price went up and as it crashed). And yet, for years, the financial regulators have failed to fully and properly examine, much less remedy and responsibly limit, these questionable if not abusive, predatory or illegal practices.

“Furthermore, for years, a handful of Wall Street’s biggest banks have ‘danced while the music was playing.’ They have facilitated many of the trading practices at the center of the events and bent the rules of the markets to their advantage using their roles in the governance, operation, and resiliency of clearinghouses, exchanges and trading venues, data repositories, and more. Those banks also remain (a) the prime brokers for most sizable hedge funds, including those involved in the GameStop events; (b) the dominant derivatives dealers with 87.3% of U.S. derivatives exposures; and (c) significant lenders in various capacities, including as securities lenders.”

Public Citizen’s written testimony also challenged the idea that the structure of today’s markets are conducive to prudent capital allocation on Wall Street. Public Citizen made the following points on the issue of high-frequency trading:

“Most trading today is executed not by individuals making deliberate decisions about the value of a stock based on fundamental analysis of a firm’s prospects, but by computers programed with algorithms that detect patterns…

“Globally, high-frequency trading has been shown to increase costs for investors by $5 billion annually…

“Public Citizen has long called for a financial transaction tax that would bridle high frequency trading that otherwise acts as a tax on average investors without providing any of the societal benefits that would come from the government taxing trades. A financial transaction tax of just 0.1% (10 cents per $100 traded) would raise nearly $777 billion over 10 years that could be reinvested in American communities through increased funding for health care, education, infrastructure or other priorities.”

Both Better Markets and Public Citizen criticized the preposterously stalled rollout by the Securities and Exchange Commission of the Consolidated Audit Trail. Better Markets wrote as follows on the subject:

“The SEC must have access to timely, accurate, and complete information on trading activities across markets to effectively supervise and police markets as well as to consider policy improvements in light of trading activities, developments and anomalies, such as those we witnessed in recent weeks. This common sense proposition has been understood since at least the ‘Flash Crash’ in May 2010, after which the SEC commenced plans to create a consolidated audit trail (‘CAT’) on all trading-related activities in the securities markets. Once fully operationalized—with needed upgrades and appropriate oversight— the CAT will collect granular order, cancellation, modification, and trade execution information and enable the SEC and other regulators to reduce, manage, and better understand market disruptions, distortions, and crashes—including anomalous trading events like the GameStop frenzy—and identify, deter, and punish manipulative, disruptive, or other illegal trading activities.”

For our take on what’s holding up the CAT, see Technological Incompetence Appears to be Intentional at Wall Street’s Top Cop.

Both nonprofit watchdogs also criticized the ability of Wall Street to run its own private justice system called “mandatory arbitration” or “pre-dispute arbitration,” which effectively closes the nation’s courthouse doors to customers and employees. Better Markets wrote as follows:

“…it is well-established that arbitration is a biased forum that favors industry respondents and affords wronged investors very little meaningful relief. Moreover, it is highly secretive, providing neither the public nor regulators any insight into the nature of the claims being lodged or the manner in which they are resolved. And it lacks the procedural protections provided in court proceedings, including the right to appeal an erroneous decision or to even have a written decision stating the facts found and the basis for the decision. Accordingly, these recent events represent yet another occasion for examining the pressing need to ban or limit mandatory pre-dispute arbitration clauses in financial services agreements.”

You can read the full statement by Better Markets here and by Public Citizen here.