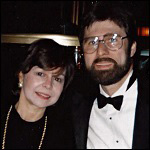 Wall Street On Parade is a financial news site created, owned and maintained by Russ and Pam Martens. Since its inception, it has received no outside funding of any nature.

Mr. Martens’ career spans four decades in publishing and printing management, including magazine and music publishing and the non-profit sector. Mr. Martens has received numerous awards in publishing and graphic design. Prior to co-creating Wall Street On Parade in 2011, he spent a decade each as General Manager of United Artists Music (Print Division); Director of Printing and Purchasing at American Lung Association; and Executive Vice President of Commercial Envelope.

The last decade of Ms. Martens career was spent as an outspoken critic of Wall Street’s corrupt practices, its private justice system (mandatory arbitration) and the repeal of the Glass-Steagall Act. (This YouTube video captures Ms. Martens testifying before the Federal Reserve on June 26, 1998 against the repeal of the Glass-Steagall Act.)  Ms. Martens’ earlier career was in publishing, including Editor-in-Chief of a national trade magazine covering the business side of college and university bookstores.

Neither Russ Martens nor Pam Martens hold any security position, long or short, in any Wall Street firm or banking institution, including those discussed on this web site.

Mission: Wall Street On Parade hopes to level the playing field between Wall Street and the 99 percent.  Wall Street is a jungle of devices to effect an institutionalized wealth transfer system. The goal of this web site is to provide the jungle guide to the 99 percent in the hope of bringing about citizen-inspired change.

Reposting/Reprints: All content at Wall Street On Parade is copyrighted. Permission to repost content should be directed to pamk741@aol.com.