Since 2000, the Securities and Exchange Commission has required brokerage firms to file a quarterly report showing where they are routing their stock trades for execution. The filing is known as a 606 report after Rule 606 of Regulation NMS (National Market System). Because so many traders at Reddit’s WallStreetBets’ message board have focused on the fact that billionaire Ken Griffin’s Citadel Securities was executing the majority of trades for Robinhood, the trading app where a lot of the Redditors directed their GameStop trades, we decided to take a look at what other online brokers might have also been directing GameStop trades to Citadel Securities.

According to the 606 reports for the fourth quarter of 2020 for the following nine online brokers, Citadel was providing payment-for-order-flow (giving a cash rebate for trade orders directed to it) to each of the following: Robinhood, E-Trade, TD Ameritrade, Charles Schwab, WeBull, Ally Invest Securities, First Trade and TradeStation. At Fidelity Brokerage Services, it was directing stock and option orders to Citadel Securities but was only receiving payment-for-order-flow on the option orders, according to its 606 report.

According to these 606 reports, Citadel ranked as the number one venue for sending both stock and option orders at the following firms: Robinhood, TD Ameritrade, Charles Schwab, WeBull, Fidelity Brokerage Services and Ally Invest Securities. Citadel was the number one venue for options trades by E-Trade while ranking lower for stock trades. At First Trade and TradeStation, Citadel ranked number one for market orders for stocks (trades with no stated price limit) and number one for options.

The bottom line here: there was a high probability that no matter what online brokerage firm Redditors sent their GameStop orders to initially, Ken Griffin’s Citadel Securities was getting a piece of the action in the end. According to the website of Citadel Securities, “To maximize trading opportunities for clients, our automated trading platform sources liquidity from all U.S. exchanges and more than 18 alternative liquidity venues.”

That last sentence is what investigators want to look at. That is, what is the final destination of all of these Citadel Securities trades. “Alternative liquidity venues” may include Dark Pools which are in desperate need of some sunshine. (See GameStop Shares: Dark Pools Owned by Goldman Sachs, JPMorgan, UBS, et al, Have Made Tens of Thousands of Trades.)

Pay to play in the trading world has worked out very well for Griffin. According to Forbes, as of today, Griffin’s net worth is $15 billion. Forbes reported Griffin’s wealth at just $7.6 billion less than five years ago.

All that dough sloshing around in Griffin’s bank accounts has found some interesting destinations. Just ask U.S. Treasury Secretary Janet Yellen. Citadel paid Yellen $992,500 for speaking gigs since she stepped down as Fed Chair in February of 2018. Two of those events, on October 17, 2019 and December 3, 2019, commanded $292,500 each. Then, at the height of the pandemic in October 2020, Citadel paid Yellen $337,500 in total to speak at unspecified events on October 9; October 20; October 26; and October 27. Yellen’s disclosure form also lists a liability to Citadel of “$50,001 to $100,000,” owed as a refund for a cancelled event. Why she hasn’t paid that back yet is curious. [See updated information at end of this article.]

All of this comes from the jaw-dropping financial disclosure form that Yellen filed with the (try to contain your laughter) Office of Government Ethics in advance of her Senate Finance Committee Confirmation Hearing to become the U.S. Treasury Secretary.

Yellen’s cash haul for speaking gigs in 2019 and 2020 came to more than $7 million, with most of that coming from Wall Street firms and hedge funds. Yellen did not disclose her speaking fees in 2018.

Yellen is now rumored to be hauling together the SEC, the Fed, and the Commodity Futures Trading Commission this week to look into the trading in GameStop. In a rational world, Yellen would have to recuse herself from any matter involving Citadel. But when it comes to matters involving Wall Street, we left that rational world in 1999 with the repeal of the Glass-Steagall Act which allowed giant federally-insured banks to merge with Wall Street’s casino trading firms for the first time since 1933. It’s been downhill ever since.

Curiously, The Hill is reporting that the New York Fed is also to take part in Yellen’s private meeting with regulators. The New York Fed has absolutely nothing to do with stock or options trading or online trading platforms. What it does do is electronically print trillions of dollars to bail out Wall Street when it blows itself up, while being simultaneously owned by the mega banks on Wall Street. (See These Are the Banks that Own the New York Fed and Its Money Button.)

This is not the first time that Citadel has enriched the coffers of a recently retired Fed Chair. In April 2015, Citadel issued a press release announcing that former Fed Chairman, Ben Bernanke, would move to the payroll of Citadel as an outside Senior Advisor. Bernanke presided over the largest secret bailout of Wall Street and foreign banks in U.S. history.

Fortune Magazine reported that Citadel was holding secret meetings with the Fed during the Wall Street crisis, writing on December 9, 2008 that “Then there was the most damaging rumor of all: Griffin had been holding ‘secret meetings’ with the Federal Reserve, looking for a bailout.”

Wall Street On Parade attempted to find out whom Bernanke had met with during the crisis. We filed a Freedom of Information Act (FOIA) request and waited. When we received Bernanke’s daily appointment calendar in 2014, six long years after the peak of the crisis, it remained heavily redacted, with 84 meetings between January 1, 2007 and the collapse of Bear Stearns on the weekend of March 15-16, 2008 still blacked out.

When the announcement was made that Bernanke would join the payroll of Citadel, Bernanke was quoted as follows in the press release: “Citadel is a dynamic firm with tremendously talented people and a rigorous approach to research and investing. I look forward to adding my perspective on a range of issues affecting our global economy.”

“Rigorous” is not exactly what all those fines by regulators suggest.

On June 25, 2014, Citadel Securities was fined a total of $800,000 by its various regulators for serious trading misconduct. Citadel paid the fines in the typical manner, without admitting or denying the charges. This is how the New York Stock Exchange described what Citadel had done:

In addition, according to the York Stock Exchange, Citadel “erroneously sold short, on a proprietary basis, 2.75 million shares of an entity causing the share price of the entity to fall by 77 percent during an eleven minute period.”

In another instance, according to the New York Stock Exchange, Citadel’s trading resulted in “an immediate increase in the price of the security of 132 percent.”

Read that and then look at this chart in GameStop over the past month: 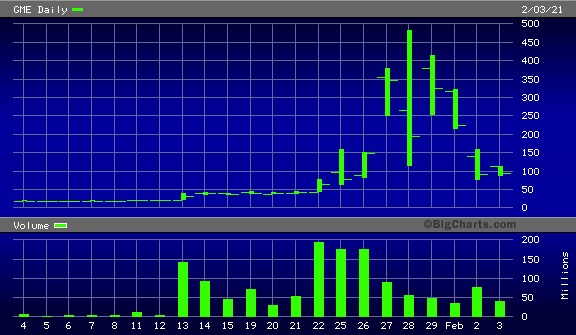 On January 9, 2014, the New York Stock Exchange charged Citadel Securities with engaging in wash sales 502,243 times using its computer algorithms. A wash sale is where the buyer and the seller are the same entity and no change in beneficial ownership occurs. (Wash sales are illegal because they can manipulate stock prices up or down.) Citadel paid a $115,000 fine for these 502,243 violations.

On November 13, 2020, FINRA, the self-regulator, fined Citadel Securities $180,000 for failing to mark 6.5 million equity trades as short sales. Citadel did not admit or deny the allegations but paid the fine.

On July 16, 2020, Citadel Securities agreed to a $700,000 fine by FINRA for executing customer orders at prices worse than it traded for its own account. It was, again, allowed to neither admit nor deny the charges.

On February 28, 2020, Citadel Securities entered into a final agreement with the CBOE (which runs exchanges for options and futures) for selling a stock short while not actually borrowing the stock to sell short (in other words, entering into a naked short). Citadel Securities received a censure and a fine of $10,000.

We could go on and on and on, but you get the picture.

Congresswoman Maxine Waters, Chair of the House Financial Services Committee, gave an interview to the Cheddar financial news service yesterday. Among those she said she wanted at the Committee’s hearing on the GameStop matter on February 18 are: the Redditor that was hawking the GameStop shares, Keith Gill; the CEO of Robinhood, Vlad Tenev; a representative from GameStop; and “the big boys.” We assume “big boys” mean the hedge funds and investors who had taken both a big short and/or long position in the shares of GameStop.

Editor’s Update: A reader has called our attention to the fact that there was a footnote on Yellen’s financial disclosure form indicating that she had paid the refund to Citadel for the cancelled speaking engagement in December 2020. Why Yellen chose to list this as an existing liability and then put the refund in a footnote remains curious.