GameStop Promoter Keith Gill Was No “Amateur” Trader; He Held Sophisticated Trading Licenses and Worked in the Finance Industry 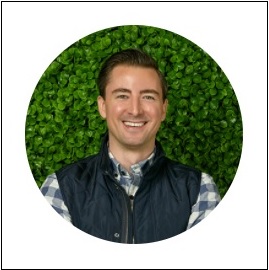 Keith Gill, As He Appeared on a MassMutual Website on April 29, 2020 (Source: Internet Archives’ Wayback Machine)

Yesterday evening, CNN’s Erin Burnett told millions of viewers that it was “amateur traders” who had taken on the powerful Wall Street hedge funds to pump up the share price of GameStop. The New York Post also called Keith Gill, the man who initiated the frenzy in GameStop shares, an “amateur investor.” This characterization of Gill fits with the broader mainstream media narrative that this is an exciting David versus Goliath story. Unfortunately, the facts keep getting in the way of that narrative.

Wall Street On Parade has confirmed that Keith Patrick Gill, a man holding highly sophisticated licenses to trade and supervise others on Wall Street, is the same man using multiple identities to promote GameStop on social media platforms. Gill, and a member of his family, have confirmed to other media outlets that Gill used the identity of DeepF***ingValue on Reddit’s WallStreetBets message board to promote GameStop and that he used the identity of Roaring Kitty on his YouTube channel and Twitter page to help engineer a short squeeze against the hedge funds that were betting the price of GameStop would fall. 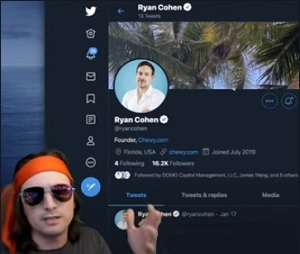 Gill was a clean cut Registered Rep at MassMutual by day and a long-haired, head-banded, fast-talking stock promoter on social media by night, sending out video promotions for GameStop that were filmed at a trading desk he had set up in his basement. (See this YouTube video by Gill. It has a caption suggesting GameStop could go from $5 to $50.)

This is highly likely to be a serious problem for both Gill and MassMutual. A genuine amateur trader could plead ignorance of industry rules about hyping stocks to the public. A heavily licensed industry professional cannot. The fact that Gill passed all those exams means that he knows what the rules are. In addition, the broker-dealer unit of MassMutual, MML Investor Services LLC, that employed Gill as a Registered Rep, could potentially face charges of failure to supervise.

Wall Street’s self-regulator, FINRA, shows on its publicly available BrokerCheck, that Keith Patrick Gill holds the following licenses: a Series 7 that allows him to trade stocks and corporate bonds for clients; a Series 3 which allows him to trade commodities for clients; and a Series 24 which allows him to function as a branch manager of a brokerage firm and supervise other licensed traders. Gill passed his exam for the commodities license eight years ago. He obtained the Series 7 and Series 24 licenses more than four years ago. 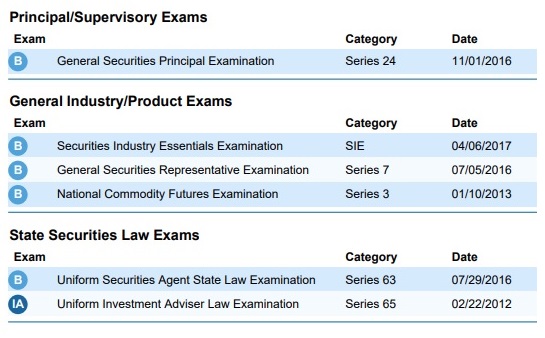 Gill’s FINRA record indicates that he began working for the unit of MassMutual on or about April 5, 2019 and is presently employed there. (He has previously worked as a licensed Registered Rep at other broker-dealers.) Some media outlets have reported that Gill worked at MassMutual until recently. MassMutual has 30 days to file a separation/termination report with FINRA for a licensed broker. This is known as a U5 form and must indicate the reason for the resignation or termination of the broker. One can imagine that MassMutual’s entire legal department will be pulling their hair out over what to write in that space. Here’s why.

FINRA has strict rules for licensed brokers regarding use of social media. For example, their rulebook states:

“Investors and financial services professionals alike are increasingly using social media for a variety of business purposes. Social Media may be a new medium, but FINRA’s rules on communicating with the public are still applicable. The rules protect investors from false, misleading claims, exaggerated statements, and material omissions…

We find it highly unlikely that MassMutual would have approved Gill to post on Reddit’s WallStreetBets, whose users appeared to pride themselves on how frequently they could pack the words f*** and b***s into a sentence, frequently with representative artwork.

The largest brokerage firms on Wall Street would never allow a Registered Rep to use multiple anonymous user names and promote a $5 stock to a mass public audience because there would be no way to know if it was a suitable investment for the level of risk the individual person could afford to take. The bulk of lawsuits that are brought, and won, against brokerage firms are for “failure to supervise.”

Gill’s YouTube videos did offer a scrolling statement at the end to the effect that this was not meant to be personal investment advice. But if it wasn’t, why was he putting it out on a mass medium like YouTube.

Gill has another potential problem. According to media reports, Gill was posting copies of his brokerage statements at E-Trade showing his GameStop position making millions of dollars in a short span of time while he was employed at MassMutual. Under FINRA Rule 3210, a licensed broker must first get permission from the broker-dealer where they are employed to open a trading account at another firm. (This is common knowledge among 99 percent of brokers on Wall Street.) If the employing firm grants that permission, the other brokerage firm must send duplicate copies of the broker’s statement to the compliance officer of his current employer. This is to prevent the firm’s name from getting dragged through the mud (as is happening currently to MassMutual) because their broker may have engaged in some form of stock manipulation. It is also to fulfill the broker-dealer’s obligation to supervise their brokers and protect the public.

The Senate Banking Committee, House Financial Services Committee, SEC and law firms employed by the hedge funds that lost billions on the short-squeeze in GameStop are looking into what was really going on here. The Senate and House Committees have announced that hearings will be held. Was Gill acting alone or was there an invisible hand urging him, or paying him, to promote the shares of GameStop.

Stock promoters, secretly paid by major Wall Street firms, were exposed in the Senate Banking hearings of the early 1930s, following the 1929 crash.

While some hedge funds like Melvin Capital have reportedly lost billions in the short squeeze, other major players on Wall Street have made windfalls. Reuters is reporting that the giant asset manager, BlackRock, “owned about 9.2 million shares, or a roughly 13% stake, in GameStop as of Dec. 31, 2020,” and could have made upwards of $2.4 billion on the rise in the stock since the end of December. Gill also frequently mentioned on his YouTube videos Michael Burry’s long position in the stock as well as Ryan Cohen, whose RC Ventures held a 13 percent stake in GameStop.

Before there are any more celebrity Tweets rooting for the Davids versus the Goliaths, it would be wise to wait for a thorough investigation to reveal what was really going on here. 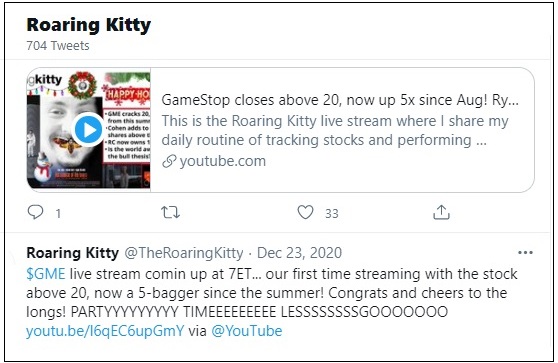