Citadel’s Ken Griffin Called to Testify at GameStop Hearing this Thursday; In Past Two Years, Republicans Got More than $60 Million of His Winnings

The tentacles of Ken Griffin’s Citadel octopus were involved in multiple ways in the GameStop saga that will get a hearing this Thursday before the House Financial Services Committee. Griffin has been called to testify along with others.

GameStop is the brick-and-mortar video game retailer whose stock soared from $18.84 on December 31 of last year to an intraday high of $483 on January 28 – a breathtaking run of 2,465 percent in four weeks – before plunging back to earth. It closed on Friday at $52.40.

The hearing has been called to understand the relationship between all of the parties that played a pivotal role in the wild trading activity, which made fortunes for some big players while leaving others licking their wounds from what has the appearance of a pump and dump scheme.

Griffin’s Citadel Securities was paying for order flow from nine online brokerage firms and able to get an early peek at their trades. Another unit of Citadel, Citadel Advisors LLC, had a net short position in GameStop and held options that could potentially benefit from the stock whipsawing up and down. Citadel’s hedge fund also invested $2 billion in Melvin Capital to keep the hedge fund from going belly up over its losses from its short position in GameStop.

Things have changed dramatically for Griffin since the financial crash in the fall of 2008 when rumors were rife that his Citadel hedge funds were bleeding and the Federal Reserve had arrived at his offices to assess the situation for itself. Citadel denied the rumors and the New York Times published its denial, allowing Griffin to survive the crash.

Last year, Forbes put Griffin’s net worth at $15 billion. Griffin has spread that money around to those who helped boost that net worth by keeping the Carried Interest tax loophole in place for hedge fund managers such as himself. Carried Interest is a legalized tax dodge that allows hedge fund billionaires to pay a tax rate lower than many plumbers and teachers.

During the 2019-2020 election cycle, Griffin sent 21 checks of $1 million or more each to PACs and Super PACs working on behalf of, exclusively, Republicans. Griffin wrote out the largest checks to the Senate Leadership Fund, a Super PAC formed to keep a Republican majority in the Senate. As of December of last year, Steven Law, the former Chief of Staff to former Senate Majority Leader Mitch McConnell, was President of the Senate Leadership Fund.

Our data comes directly from the Federal Election Commission records for the 2019-2020 election cycle. Griffin had made so many contributions to individual Republican candidates that we filtered the FEC data by looking at just the checks he wrote out for $1 million or more. That turned up a total of $61 million in just that two-year period for PACs and Super PACs working to elect Republicans. His total outlay on behalf of Republicans was millions of dollars more.

Since 2011, Citadel has also spent approximately $500,000 or more per year lobbying the Federal government for issues pertaining to derivatives trading and “tax matters.”

Citadel has also attempted to stay very close to former Federal Reserve Chairs. Ben Bernanke was hired as a Senior Advisor to Citadel the year after he stepped down as Fed Chair. Bernanke remains in that position at Citadel. Janet Yellen, who stepped down as Fed Chair in February 2018, reported on her financial disclosure report for Treasury Secretary that she had been paid $992,500 for speaking engagements at Citadel and had refunded it $50,000 to $100,000 for a cancelled event.

What the public should be watching for in the hearing this Thursday is whether Republicans on the Committee lob softballs at Griffin. We’ve seen that happen repeatedly when Wall Street titans come before the Senate Banking and House Financial Services Committees. 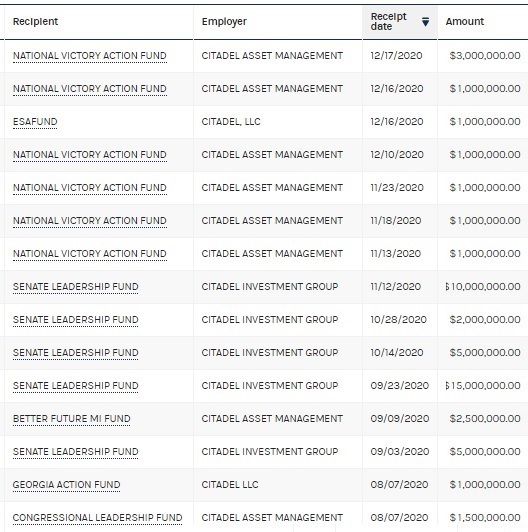