GameStop Hearing: Citadel’s Ken Griffin Doesn’t Let the Brutal Facts Get in the Way of His Testimony 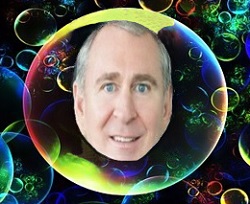 The billionaire hedge fund titan of Citadel LLC and its market-making/trade execution arm, Citadel Securities, delivered a load of horse pukky in his written testimony to the House Financial Services Committee. Griffin is slated to appear as one of six witnesses at the hearing scheduled at noon today to examine the trading in shares of GameStop in January.

GameStop is the brick-and-mortar video game retailer whose stock soared from $18.84 on December 31 of last year to an intraday high of $483 on January 28 – an unprecedented run of 2,465 percent in four weeks by a struggling retail outlet. The stock price then quickly plunged back to earth. It closed yesterday at $45.94.

GameStop is listed on the New York Stock Exchange. Its shares are not supposed to trade like a penny stock operated out of a boiler room. The contours of today’s hearing are an indictment of what Wall Street watchers have been warning about for the past decade: markets are dangerously rigged in the U.S.

According to the written remarks Griffin submitted for the hearing, which are typically read by the witness at the opening of the session, he’s going with the approach that the Chairman and CEO of JPMorgan Chase, Jamie Dimon, used when he was hauled before Congressional Committees to explain how his federally-insured bank had used depositors’ money to gamble in high-risk derivatives in London in 2012 and lose $6.2 billion.

At a June 19, 2012 House hearing on the matter, Dimon told House members that “the starting point should be that the United States has the best, widest, deepest, most transparent capital markets in the world.” If any part of that statement is true, it’s certainly not because of Wall Street but because of career criminal prosecutors. In the past six years, JPMorgan Chase has pleaded guilty to five felony counts, three of which involved rigging the foreign exchange, Treasury and precious metals markets, respectively.

Billionaires like to assure Congress that our markets are the best in the world (never mind all those felony counts being handed out for rigged markets) because right-wing Republicans can then pick up that talking point to argue against tighter regulation of markets.

Against that backdrop, Griffin states this in his written testimony for today’s hearing:

“Chairwoman Waters, Ranking Member McHenry and distinguished members of the Committee, thank you for the opportunity to testify today on the recent market events. The U.S. capital markets are the envy of the world. Our nation’s ability to allocate capital to its best and highest use cr­­­­­eates jobs, drives innovation and fuels our economy.”

That’s an alternative reality that exists only in the heads of billionaire hedge fund titans and Wall Street bank CEOs. (See our take a few weeks ago: SEC Chair Jay Clayton Left Markets in the Biggest Mess Since 1929.)

Griffin sums up with this:

“Individual investors are better served by America’s markets than ever before, and it is critical that our markets continue to be a force for fairness and integrity worthy of investor confidence and participation.”

The words “continue to be” along with “fairness and integrity” are problematic in that sentence, particularly rolling off the lips of Griffin. (As for how well U.S. markets are serving the individual investor, you’ll want to watch this Frontline program and learn how two-thirds of your retirement assets in your 401(k) plan could go to Wall Street’s fees over an investing lifetime.)

In some cases, the allegations against Citadel Securities are mind-numbing in terms of quantity and the span of time over which they occurred. Here’s a small sampling:

On July 16, 2020, Citadel Securities agreed to a $700,000 fine by FINRA for executing customer orders at prices worse than it traded for its own account. It was allowed to neither admit nor deny the charges. The activities did not occur over a matter of days or weeks – but over a period of years.

On December 10, 2018 the Securities and Exchange Commission fined Citadel Securities $3.5 million for the following:

“From November 2012 to August 2016, Citadel submitted 2,774 EBS to the Commission, all of which contained deficient information, resulting in incorrect reporting of trade execution time data for approximately 80 million trades. As a result, Citadel violated the recordkeeping and reporting requirements of Section 17(a)(1) of the Exchange Act and Rules 17a-4(j) and 17a-25 thereunder.”

“Commission staff routinely sends requests for securities trading records to market makers, brokers and/or clearing firms in order to identify buyers and sellers of securities, and firms provide the requested records in a universal electronic format known as the EBS format. It is a fundamental obligation of broker-dealers to provide complete and accurate EBS data when requested by representatives of the Commission to do so. The submission of complete and accurate blue sheet data is critical to many aspects of the Commission’s operations and its ability to discharge its enforcement and regulatory mandates. The failure of a broker-dealer to provide complete and accurate EBS information in response to a Commission request can impact the Commission’s ability to discharge its statutory obligations, undermine the integrity of its investigations and examinations, and ultimately interfere with the Commission’s ability to protect investors.”

Now here’s where you need to use a simple calculator to fully comprehend why Senator Bernie Sanders is correct that the business model of Wall Street is fraud. The SEC tells the public that this violation of its rules occurred over a period of almost four years and impacted “approximately 80 million trades.” A fine of $3.5 million for a violation covering 80 million trades means that Citadel Securities paid a little over 4 cents for each reporting violation.