Mission Creep or Creepy Mission: The New York Fed’s Trading Desk Has Ballooned to $6.59 Trillion Today from $576 Billion in 2008 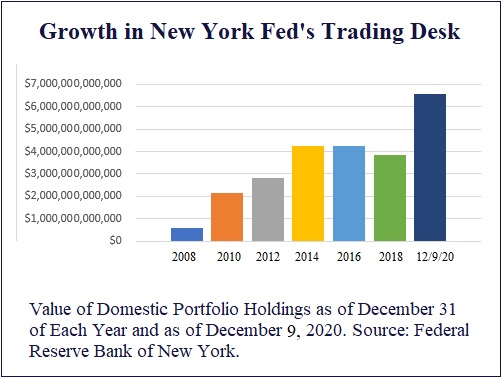 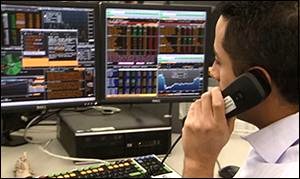 Few Americans are aware that the central bank of the United States, the Federal Reserve, has its own trading desk in New York that interacts every business day with the trading desks of the giant Wall Street banks. When Americans think of massive trading operations, names like JPMorgan, Goldman Sachs, Morgan Stanley, UBS and Citigroup come to mind. But if we measure trading desks by the value of their portfolio holdings, these global banks are pikers compared to the Fed’s trading desk, operated by one of its 12 private regional banks, the Federal Reserve Bank of New York (New York Fed).

This is how the New York Fed explains why it has a massive Trading Desk:

“The SOMA Manager is responsible for the staff of the Trading Desk at the Federal Reserve Bank of New York (‘the Desk’). The Desk thus executes open market operations on behalf of the entire Federal Reserve System.”

With whom exactly is the New York Fed’s Trading Desk conducting its trades? The same Wall Street trading houses (primary dealers) it bailed out to the tune of $29 trillion from 2007-2010 and to the tune of $9 trillion beginning on September 17, 2019 – months before there was a COVID-19 pandemic in the United States. Even crazier, some of the largest Wall Street banks who own these primary dealers actually own the New York Fed. (See These Are the Banks that Own the New York Fed and Its Money Button.) Adding further to the New York Fed’s status as the quintessential captured regulator, it has been put in charge of regulating these same banks by the Federal Reserve’s Board of Governors.

The New York Fed explains its trading counterparties as follows:

“Primary dealers are trading counterparties of the New York Fed in its implementation of monetary policy, and are expected to participate consistently and competitively in open market operations. They are also expected to make markets for the New York Fed on behalf of its official account holders as needed, and to bid on a pro rata basis in all Treasury auctions at reasonably competitive prices. The New York Fed also expects primary dealers to provide ongoing insight into market developments in the daily market monitoring activities that the Desk conducts to support the formulation and implementation of monetary policy. As of December 31, 2019, there were twenty-four primary dealers.”

In 2013 Wall Street On Parade attempted to obtain a photo of the New York Fed’s trading desk. The refusal by the media team at the New York Fed made us curious. We did some digging on our own and obtained vintage and current photos from Fed archives and a Fed video. 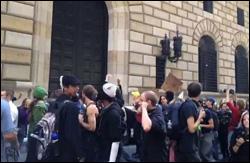 The New York Fed’s Trading Desk is located at its headquarters at 33 Liberty Street in lower Manhattan. That historic building is a 22-story fortress with 18 floors above ground and four below. The building was completed in 1924. Its principal architect, Philip Sawyer, is said to have been influenced in his design by the Florentine palaces he observed while studying in Italy. The New York Fed’s striking façade of large rectangular blocks of limestone and sandstone ashlar with arched windows and ironwork resembles the Strozzi Palazzo in Florence. This imposing structure was the scene of numerous protests during the Occupy Wall Street demonstrations that came in the aftermath of the Wall Street financial crash of 2008.

A Fed YouTube video made sometime between 2010 and 2013 explains that the New York Fed is staffed with approximately 60 traders at any one time. (That figure may be different today.) The traders’ workday begins at 4:30 a.m. and lasts until 6:00 to 6:30 p.m. according to the video spokesperson for the Fed. (See video below for how the Trading Desk gathers market intelligence throughout the day.)

In November 2013, Andrew Huszar, then a senior fellow at Rutgers Business School and a former Morgan Stanley Managing Director, raised a warning about the growing coziness between the Fed and Wall Street. Huszar wrote in an OpEd in the Wall Street Journal that he had “…left the Fed out of frustration, having witnessed the institution deferring more and more to Wall Street. Independence is at the heart of any central bank’s credibility, and I had come to believe that the Fed’s independence was eroding.”

Huszar continued: “In the past, Fed leaders — even if they ultimately erred — would have worried obsessively about the costs versus the benefits of any major initiative. Now the only obsession seemed to be with the newest survey of financial-market expectations or the latest in-person feedback from Wall Street’s leading bankers and hedge-fund managers. Sorry, U.S. taxpayer.”

The New York Fed, Pumping Out More than $9 Trillion in Bailouts Since September, Gets Market Advice from Giant Hedge Funds