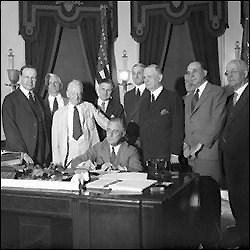 Seven banking and credit union associations have sent a letter to the Office of the Comptroller of the Currency (OCC), the regulator of national banks in the U.S., spelling out the dangers of the OCC approving a pending bank charter that would allow a national bank to accept and hold deposits that lack federal deposit insurance. The lack of federal deposit insurance triggered the bank runs and banks collapses that played a key role in ushering in the Great Depression. (More on that in a moment.)

The organizations make the following points in their letter to the OCC:

“…the precedent-shattering approach of granting a national bank charter to an institution that accepts only uninsured deposits would violate the Federal law, the consistently expressed intent of Congress, and public policy considerations essential to the functioning of the nation’s financial system….”

“…the public information released by the OCC includes only a skeletal description of Applicant’s proposed activities and does not provide the public with a sufficient factual basis to comment on the application.”

“…the Associations understand that, in addition to ‘conducting lending, payments, and custody activities,’ as identified in the public information released by the OCC, Applicant will also accept deposits in minimum denominations of $250,000 from its affiliates and third parties that are ‘accredited investors.’ ”

“As an uninsured national bank, Applicant would evade core prudential standards and limits that Congress has established to ensure the safety and soundness of banks, protect the financial stability of the United States, and prevent the mixing of banking and commerce.”

Concerns about the safety and soundness of banks that lack federal deposit insurance and are built on imprudent business models are well founded and based on one of the darkest eras in U.S. financial history.

Two days after Franklin D. Roosevelt was sworn in as President on March 4, 1933, he had no choice but to declare a nationwide “banking holiday” lasting to March 13 in order to deal with a financial panic and bank runs. Setting in motion the growing panic was the collapse of the Bank of United States in 1930, the largest bank collapse in U.S. history at that point. At the time of its collapse, Bank of United States was the fourth largest depositor bank in New York City, holding an astounding $268 million for over 400,000 small time depositors. There was no federal deposit insurance at that time to stem the banking panic.

The bank’s name inferred to many that it was part of the U.S. government, which it decidedly was not. The bank was founded by two men from the garment industry, Bernard Marcus and Saul Singer. But the bank’s name and its collapse fed media coverage and triggered other bank runs.

President Roosevelt signed the Glass-Steagall Act on June 16, 1933, creating federal deposit insurance for bank deposits while also banning banks taking insured deposits from owning stock trading houses. Like the dangerous structure of today’s biggest deposit-taking banks on Wall Street, Bank of United States had a stock trading arm, the Bankus Corp. This trading unit within the bank manipulated the price of its own stock, using the money of uninsured depositors, and then used the shares as collateral to obtain loans. Banking examiners later determined that other failed banks had acted similarly.

The Glass-Steagall Act protected the U.S. banking system for 66 years until its repeal by Congress on November 12, 1999 under the Gramm-Leach-Bliley Act. Just nine years after Glass-Steagall was repealed, Wall Street trading houses like Citigroup, Lehman Brothers and Merrill Lynch – which  owned federally-insured banks as a result of the repeal of Glass-Steagall – were collapsing from their wild, speculative bets, setting off the worst financial crash since the Great Depression.

The seven organizations warning against the bank charter application by Figure Bank also correctly argue that Section 2 of the Federal Reserve Act does not permit national banks to offer uninsured deposits. They cite the following statutory language of Section 2:

“Every national bank in any State shall, upon commencing business or within ninety days after admission into the Union of the State in which it is located, become a member bank of the Federal Reserve System by subscribing and paying for stock in the Federal Reserve bank of its district in accordance with the provisions of this chapter and shall thereupon be an insured bank under the Federal Deposit Insurance Act [12 U.S.C. § 1811 et seq.], and failure to do so shall subject such bank to the penalty provided by section 501a of this title.”

The organizations also correctly warn against the dangerous precedent that approval of this banking model would pose to the U.S. financial system, writing:

“…if Applicant is successfully able to establish itself as a national bank and a depository institution, despite not being an insured depository institution, it is likely that other enterprises would follow this path, thereby creating a new and growing source of systemic risk. Even if the number of uninsured national banks and the amount of their deposits were relatively limited, the potential impact of the failure of one or more of these banks upon other banks may not be. This is particularly the case because the OCC has not acted as a receiver in decades, and the resolution of such a firm is likely to be confusing and uncertain.

“…the impact of the failure of one uninsured bank on all other uninsured banks is likely to be immediate and severe. Experience with the failure of other uninsured depositories, such as the Ohio thrift crisis, demonstrates the serious risk of a run on all uninsured depositories. And because, in this case, the failed banks would have a national charter rather than a special state charter, the risk of spill-over into the insured banking system is meaningful. Depositors of insured banks (particularly the less sophisticated) may not understand the difference between insured and uninsured national banks and would withdraw their deposits as soon as possible.”

With the Glass-Steagall Act still waiting to be restored by Congress, this latest plan to consider uninsured deposits by a fintech startup national bank will further undermine confidence in the U.S. banking system.