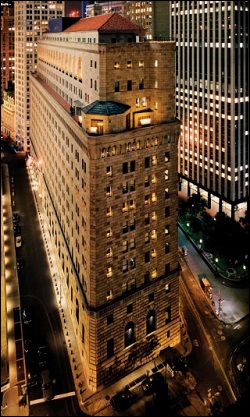 On July 21, 2011 the investigative arm of Congress, the Government Accountability Office (GAO), released the first-ever government audit of the Federal Reserve in its 98-year history. The audit came about as a result of the determined efforts of Senator Bernie Sanders to force transparency on the secretive Wall Street bailout actions of the Federal Reserve during the 2008 financial crash and the years that followed. Sanders successfully tacked an amendment on the Dodd-Frank financial reform legislation of 2010 that mandated a top-to-bottom audit of how much the Fed had spent on its bailout and the financial institutions to whom it went.

Sanders issued a statement saying this on the day the findings were released:

“The first top-to-bottom audit of the Federal Reserve uncovered eye-popping new details about how the U.S. provided a whopping $16 trillion in secret loans to bail out American and foreign banks and businesses during the worst economic crisis since the Great Depression…The Fed outsourced virtually all of the operations of their emergency lending programs to private contractors like JP Morgan Chase, Morgan Stanley, and Wells Fargo.  The same firms also received trillions of dollars in Fed loans at near-zero interest rates. Altogether some two-thirds of the contracts that the Fed awarded to manage its emergency lending programs were no-bid contracts. Morgan Stanley was given the largest no-bid contract worth $108.4 million to help manage the Fed bailout of AIG.”

In effect, the Federal Reserve bailout was conceived by Wall Street and run by Wall Street for its own benefit and controlled behind a dark curtain at the Federal Reserve Bank of New York. After Bloomberg News had won at both the Federal District Court and Appellate Court to have some of the Fed’s lending data released to the public, the very banks that the Fed was bailing out with trillions of dollars in revolving, secret loans (Bank of America, JPMorgan Chase, Citigroup and Wells Fargo) formed a consortium called The Clearinghouse Association LLC, and filed an appeal with the U.S. Supreme Court to stop the release of the data. The Supreme Court declined to hear the appeal and the Fed was forced to release some of the information in 2010.

But even after the GAO released its audit in 2011 showing that the Fed had sluiced over $16 trillion to a hodgepodge of Wall Street banks, foreign banks and hedge funds, there was still plenty of secrecy.

The GAO report notes on page two that the audit does not include the Fed’s loans made through its discount window during the financial crisis. Also, in a tiny footnote on page 2 of the GAO audit, there is this statement: “…this report does not cover the single-tranche term repurchase agreements conducted by FRBNY in 2008. FRBNY conducted these repurchase agreements with primary dealers through an auction process under its statutory authority for conducting temporary open market operations.” FRBNY stands for the Federal Reserve Bank of New York – the deeply conflicted and crony regulator of Wall Street whose gross incompetence had allowed Wall Street banks to become a gambling casino stuffed to the brim with toxic debt by 2008. (See related articles below.)

The Levy Institute of Economics tried its hand at tallying up all of the Fed’s lending programs, including the single-tranche repurchase agreements (called ST OMO or single-tranche open market operations on the Street) and came up with a cumulative tally of $29 trillion.

Equally scandalous, when the Fed released some of its data in 2010 it showed that $71 billion in loans had been made through one of its programs called the Term Asset-Backed Securities Loan Facility (TALF). Billions of dollars from TALF had made its way directly into the pockets of hedge funds that had played a role in the collapse of the housing market by shorting subprime debt. (Shorting means to make a wager that is profitable if the price of the instrument declines in value.) The Financial Times reported that “FrontPoint-run funds borrowed $4.1bn, while Magnetar-linked funds borrowed just over $1bn. The two fund managers were among the most prolific shorters of the US housing market.”

Over the past two weeks we have been investigating another bailout program at the Federal Reserve Bank of New York. It was known as Maiden Lane LLC (that’s the name of one of the streets adjacent to the New York Fed’s headquarters’ building in lower Manhattan). When the investment bank, Bear Stearns, blew itself up with toxic debt in March of 2008, JPMorgan was willing to take it over but only if the New York Fed took on the bulk of the risk of Bear’s imploding debt pile. Maiden Lane LLC was a Structured Investment Vehicle (SIV) created to do just that.

But take a closer look at the deal and there’s the same layers of darkness that the Fed fought a court battle for years to maintain around its other lending programs.

Bear Stearns assets were acquired and transferred to Maiden Lane LLC on June 26, 2008 but they were priced as of March 14, 2008 – at a time of depressed prices on Wall Street.

But instead of providing a 2008 report on what was purchased, the New York Fed doesn’t produce a detailed listing of the asset holdings until January 2010. Our request to obtain a 2008 asset holdings report went unanswered.

The January 2010 asset holdings report shows some very strange things to have been sitting on the mortgage desk at Bear Stearns. It shows a $1.1 billion position in a Morgan Stanley pool called the Morgan Stanley Cap 2008-Top29. It also shows an $849 million position in a Goldman Sachs deal called GSMS_07-EOP. There’s two Thornburg mortgage deals totaling over $1.8 billion (TMST_05-4 AX and TMST_06-1 AX). Then there’s a staggering $4 billion in debt from the Hilton Hotel chain.

And while the New York Fed provides regular listings of its asset sales, it fails to provide the sales price for each asset and to whom it was sold.

When it comes to the sale of its whole loans and physical real estate that it somehow came to own, it has this to say: “Sales related to whole loans and real estate owned are excluded from this report due to the confidentiality provisions that govern these transactions.”

Why should anything involving large sums of money that the ultimately taxpayer-backstopped Federal Reserve or its New York regional bank does in a financial crisis or its aftermath be entitled to a confidentiality provision. That issue was already litigated in court for years by the Fed and Bloomberg News and the Fed lost.

Senator Bernie Sanders needs to call on the Government Accountability Office to pry loose from the New York Fed all of the missing details of its crisis era deals and release that as soon as possible to the public.

The American people have been a patsy for Wall Street and its crony regulator long enough.

Why Americans Don’t Trust the Fed: It’s Too Damn Secretive