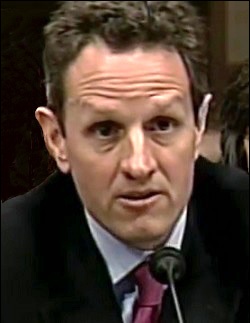 Timothy Geithner Testifying Before the Senate Banking Committee on April 3, 2008 about the Bear Stearns Bailout by the New York Fed

On April 3, 2008 Federal Reserve Chairman Ben Bernanke and the President of the Federal Reserve Bank of New York, Tim Geithner, appeared on a panel of witnesses before the U.S. Senate Banking Committee. The subject of the hearing was the Federal Reserve’s unprecedented actions the prior month to bail out the collapsing investment bank, Bear Stearns, and facilitate its purchase by JPMorgan Chase.

Putting Bear Stearns into the hands of JPMorgan Chase, now a three-count felon, was like returning a garden snake to a pet store and walking out with a python.

The New York Fed had crafted a deal where $30 billion of toxic assets were going to be purchased from Bear Stearns to prevent JPMorgan from bearing the risk of sizeable losses when it took over the firm. The New York Fed put up $28.82 billion in a loan to a newly crafted entity called Maiden Lane LLC to buy the bulk of the $30 billion in toxic assets while JPMorgan Chase put up a miserly $1.15 billion. Bear Stearns’ shareholders got a purchase price elevated from $2 a share to $10 a share.

While the deal was waiting to close, the Fed would pump another $853 billion into Bear Stearns in secret, below-market loans that were not disclosed until years later.

In an amazing moment of prescience, the late Senator Jim Bunning asked during the Senate Banking Committee hearing: “What’s gonna happen if a Merrill or a Lehman or someone like that is next?” (Merrill collapsed into the arms of Bank of America just 5 months later and Lehman Brothers filed for bankruptcy protection on September 15 of that year.) Both Bernanke and Geithner danced around that issue.

Bernanke was asked repeatedly about the value of the collateral the Fed was getting in exchange for its $28.8 billion loan. Bernanke reassured the Senators that he felt it was good collateral. In Bernanke’s self-congratulatory book on the crisis, The Courage to Act, he writes that “the New York Fed negotiated fiercely over the set of assets that would collateralize our loan…”

The New York Fed and the Federal Reserve Board of Governors’ in Washington, D.C. were not, however, confident enough about those assets to actually expose them to the sunshine of public disclosure. The Fed refused media demands for the list of the assets until Congressman Darrell Issa, a Republican of California, sent a letter in 2010 to William Dudley, the then President of the New York Fed, asking him to disclose the assets. A listing of the assets was then provided to the public, but dated as of January 2010. (Our recent request to receive a listing of assets as of June 30, 2008 when the deal closed went unanswered by the New York Fed, raising the question as to when the actual choice of assets was really finalized.)

What the 2010 listing showed was a stunning mishmash of hard-to-value assets, including $4 billion in commercial real estate loans backed by Hilton Hotels in the U.S., Europe, and even Russia. In hindsight, the New York Fed’s acquisition of Hilton debt looks like it was another bailout of the biggest banks on Wall Street because in addition to Bear, the debt underwriters included Deutsche Bank, Goldman Sachs, Lehman Brothers, Merrill Lynch and Morgan Stanley. The debt derived from a private equity deal by Blackstone when it took Hilton private in 2007.

It took a decade for the New York Fed to provide a ledger showing who eventually purchased all that collateral from it and at what price. But the ledger’s listing of transactions for the Hilton loans is as clear as mud. Under a column titled “Adjustments” as a result of restructuring, the New York Fed appears to write-off over $4 billion in Hilton Debt and then restate it with a new cost basis. For example, one entry shows that a Hilton loan with a basis of $1.9 billion was sold to Bank of America on “various” dates for $1.35 billion. Other Hilton debt sales do not list a buyer but simply show “various” under the buyer column.

An October 29, 2009 article at the Wall Street Journal indicates that Blackstone, the private equity owner of Hilton, was pressuring lenders “to cut up to $5 billion from the $20 billion debt load carried by Hilton Worldwide, as the private-equity firm seeks to protect its single biggest investment…” A subsequent article from the Wall Street Journal on February 20, 2010 reported that “Hilton’s lenders and Blackstone are finalizing a deal that would cut its $20 billion debt load by about $4 billion….”

Did the New York Fed give concessions to Blackstone in 2010? If it did, what happened next raises more serious red flags. Blackstone decided to take Hilton public again in 2013 in an Initial Public Offering at $20 a share, which valued the whole company at $32 billion, or $6 billion more than Blackstone paid for the company in 2007. By 2018, Bloomberg reported that Blackstone was selling off its final shares in Hilton and had reaped a cumulative profit of $14 billion.

But that loss hardly captures the insanity of a regional bank of the Federal Reserve, the central bank of the United States, sticking its neck out to buy $8.2 billion of loans collateralized by commercial real estate at a time when the U.S. economy was in a state of collapse. If the loans soured, the Fed could have been forced to foreclose and end up owning a sprawling portfolio of hotels that stretched from London to Moscow.

In fact, the New York Fed did end up owning a gang-riddled shopping mall in Oklahoma City – the Crossroads Mall. According to a 2010 retail report for that area, the mall was 75 percent vacant of tenants by that time, with anchors JCPenney, Macy’s and Dillard’s having moved out. The New York Fed had created a trust to hold its commercial loans and The Oklahoman reported the following on May 1, 2009:

“Crossroads Malls’ mortgage holder is now holding the mall, too. Maiden Lane Commercial Mortgage Backed Securities Trust offered the only bid for the mall Thursday at the Oklahoma County sheriff’s sale, so it went back to the lender.

The Oklahoman reports the following on September 14, 2011:

“Mike Dillard and Roddy Bates, owners of Raptor Properties LLC, paid $3.5 million for the long-struggling mall at Interstate 35 and I-240. The mall had been owned by the Federal Reserve Bank of New York since 2008 in one of the oddest pieces of fallout from the federal banking bailout…As recently as June, the asking price for the 762,532-square-foot property was $6 million…”

The asking price had been $24 million according to a 2010 report from The Oklahoman.

Exactly how the New York Fed arrived at its figure of a $9.3 million loss in the mall is not clear.

The only government audit that has been conducted of the Federal Reserve and New York Fed’s open spigot to Wall Street, foreign banks and hedge funds during the financial crisis of 2007 to 2010 was released in July 2011. That audit was conducted by the Government Accountability Office (GAO) and tallied up $16 trillion in revolving loans. It provided a very cursory look at the Maiden Lane transactions. (In addition to the Maiden Lane used for the purchase of Bear Stearns by JPMorgan Chase, the New York Fed also created Maiden Lane II and Maiden Lane III, which were involved in pushing bailout money into the front door of the giant insurer AIG so that it could go out the back door by the tens of billions of dollars to sluice derivative payments owed by AIG to the mega banks on Wall Street as well as funds owed under securities lending agreements.)

The GAO’s audit, however, missed an additional $13 trillion in loan programs from the Fed and the New York Fed. Thus, it can hardly be called an audit. When the Levy Economics Institute tallied up the real numbers, it came to an astounding $29 trillion.

As millions of Americans were losing their homes to foreclosure as a result of the reckless supervision of the mega banks on Wall Street by the New York Fed and millions more were losing their jobs as a result of the ensuing collapse in the economy, the New York Fed was not only badly managing its shopping mall in Oklahoma and its Wisconsin Hilton Garden Inn, but it was spending $43.6 million on modernizing its own headquarters building in lower Manhattan between 2007 to 2010 – which included the worst years of the financial crisis.

The mandate of the Federal Reserve since its founding in 1913 and especially since the creation of Federal deposit insurance in 1933 is to protect depository institutions in times of crisis. In its 95 years of existence up until 2008, it had never bailed out a trading firm on Wall Street that owned no depository institution.

It’s time for a real investigation of the financial crisis and a real audit of the funds spent. Until we have that, Americans are just sitting ducks for the next Wall Street crisis.