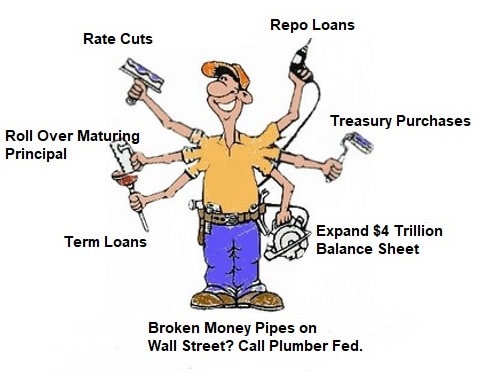 From this past Friday evening through Sunday, if you clicked on any of the web pages at the New York Fed pertaining to the hundreds of billions of dollars it has been pumping out weekly to Wall Street’s securities firms since September 17, you saw the message below:

We emailed the New York Fed’s media contact and asked why all of the other web pages at the New York Fed were working just fine but only its repo operation data and announcements had up and disappeared. We received no response. The web pages have since been restored with some tweaking that seems to have the intent of making this massive money spigot to Wall Street, for the first time since the financial crisis, appear to be just your ole run of the mill open market operation from your ole reliable New York Fed.

As it turns out, on Friday, October 18, the same day that the repo info disappeared at the New York Fed, Senator Elizabeth Warren, who commands a major media pulpit as one of the leading Democratic candidates for President, sent a hard-hitting letter to U.S. Treasury Secretary Steve Mnuchin demanding answers as to what necessitated the Fed to have to make these loans and why the Fed announced on October 11 that it was going to extend the loans “at least through January of next year.” (As Treasury Secretary, Mnuchin also chairs the Financial Stability Oversight Council whose job it is to anticipate and prevent financial crises from occurring and destroying the U.S. economy, as occurred in 2008.)

Curiously enough, from Friday night through the weekend, when one clicked on the October 11 announcement about the money spigot staying open into January of next year, it also went to a “Site Maintenance” announcement.

Warren’s letter included footnotes that carried the url for these dead links. If the media that received copies of her letter wanted to write an article about the issue, they would have been hard-pressed to obtain the granular data from the web site of the New York Fed over the weekend.

The Fed’s announcement about extending the program into January is particularly important. After the Fed went wild during the 2007 to 2010 financial crisis and secretly pumped $29 trillion into bailing out Wall Street, with no authorization or even awareness of Congress, the Dodd-Frank financial reform legislation of 2010 was supposed to place tight reins on the Fed’s money printing and bailout operations.

On the matter of what the Fed is and is not allowed to do in the future, one section of Dodd-Frank mandates that “any emergency lending program or facility” must be “for the purpose of providing liquidity to the financial system, and not to aid a failing financial company and…any such program is terminated in a timely and orderly fashion.”

The Fed’s $29 trillion in cumulative bailout programs secretly stretched from December 2007 through at least July 2010. There has not been one Congressional hearing on this Wall Street bailout program that was abruptly initiated with no prior warning on September 17 and is now stretching from one calendar year into the next. The Fed also announced on October 11 that it will be buying up Treasury Bills into the second quarter of next year, starting off with a whopping $60 billion a month. (To many, this sounds like the Fed is starting another round of Quantitative Easing, picking up where it left off in the financial crisis.)

It’s also impossible to know if the Fed is lending to “a failing financial company” because the Fed is not making public where the loan proceeds are going. In the last crisis, the Fed didn’t make the names of its borrowers public until it lost a multi-year court battle. It turned out that the Fed had lent $2.5 trillion cumulatively to Citigroup, which was insolvent for much of the time it was receiving loans from the Fed.

The loans and Treasury Bill purchases are not the only forms of assistance the Fed is giving to Wall Street. It is also cutting short-term interest rates and reinvesting the maturing principal each month on the notes and bonds it holds from the last crisis. From a peak of $4.5 trillion in 2015, its balance sheet is now back to $4 trillion, increasing $253 billion just since September.

One surprising, and disturbing, sentence in Warren’s letter is this: “I do not question the actions of the New York Fed, but I write to seek clarity on why they were necessary….”

If ever there was an institution that deserved intense scrutiny, it’s the New York Fed. (See related articles below.) This must be the more reserved Presidential Candidate Warren because Senator Warren is extremely familiar with what a failed crony regulator of Wall Street the New York Fed actually is and the extreme damage that cronyism has done to the American economy.