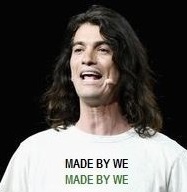 WeWork is just one more in a long series of Wall Street scandals that prove that the universal banking model is little more than a thinly-disguised wealth transfer system from the pockets of average Americans to the 1 percent.

Just two months ago WeWork’s two lead Wall Street underwriters, JPMorgan Chase and Goldman Sachs, were planning to offer WeWork’s shares to the public investor at a valuation in excess of $47 billion. Now we are learning that the company may run out of money next month and has an actual valuation of $8 billion or less.

WeWork’s founder, Adam Neumann, who was attempting to cash out of his company that had never made a dime of profits in its nine years of existence and had run up losses of $900 million in just the first six months of this year, will walk away as a billionaire according to a report in the Wall Street Journal this morning. According to the Journal, the Japanese SoftBank is planning to take over the mess and plow in more billions in a private buyout. SoftBank already has $10.5 billion invested in WeWork so it is effectively doubling down on a bad trade – something that even rookie stockbrokers know better than to do.

The obvious questions are why did two seasoned underwriters agree to bring this dog of a company public; why did JPMorgan, pre-IPO, shower Neumann with more than $100 million in personal loans despite his egregious conflicts of interest with WeWork, a company it was planning to bring public;  what does it say about the capital allocation process in the United States that this charade came so close to going public and when the ethically-challenged Neumann can walk away as a billionaire? Neumann was buying up real estate and then leasing it to WeWork. He also trademarked the name “The We Company” and sold it back to the company for $5.9 million. (The money was returned after the deal was reported in the media.)

Goldman Sachs and JPMorgan Chase are known as “universal” banks. Each is the owner of a commercial bank which takes in federally-insured deposits from moms and pops across America while also owning an investment bank that underwrites and trades in high risk stock and bond offerings. That is a combustible mix that is completely incompatible with U.S. statutory mandates for the “safety and soundness” of commercial banks whose deposits are backstopped by the U.S. taxpayer.

From 1933 until 1999, universal banks were illegal in the United States. Then one day Sandy Weill whispered to John Reed that “we could be so rich,” and got the Clinton administration to go along with repealing the 66-year old Glass-Steagall Act which prevented these kinds of mergers. The universal bank that Weill and Reed created, Citigroup, did indeed make both men obscenely rich. It also collapsed in 2009 to a 99 cent stock while receiving the largest taxpayer bailout in U.S. history.

In order to maintain safety and soundness, federal regulators require that commercial banks stay clear of dangerous reputational risks that might prompt a run on the bank by depositors.

The poster child for this dangerous cocktail of mixing depository banks with Wall Street’s risky trading  is the London Whale scandal that occurred at JPMorgan Chase in 2012. JPMorgan Chase had the not-so-brilliant idea to create a unit known as the Chief Investment Office (CIO) inside its federally-insured commercial bank where it would gamble in high risk derivatives in London and call it hedging for the commercial bank in hopes of slipping under the radar of regulators. The derivative bets became so large that they rocked the derivatives market, which resulted in media coverage and exposure of what was really going on. What was really going on was $6.2 billion in depositor losses from derivative bets gone awry inside JPMorgan’s federally-insured bank.

The federal regulator of national banks, the Office of the Comptroller of the Currency, stated in its consent order against JPMorgan Chase that its findings “establish that the Bank has deficiencies in its internal controls and has engaged in unsafe or unsound banking practices and violations of 12 C.F.R. Part 3, Appendix B (Market Risk Management Amendment) with respect to the credit derivatives trading strategies, activities and positions employed by the CIO on behalf of the Bank.”

What does WeWork have to do with the safety and soundness of JPMorgan Chase? It sounds an awful lot like JPMorgan may have been “tying” its offer of personal loans from its commercial bank to Adam Neumann in exchange for its investment bank landing the role of lead underwriter in the Initial Public Offering (IPO) of WeWork shares. Tying is illegal and could, once again, subject the bank to charges of engaging in unsafe or unsound banking practices.

If tying was not involved here, how does one explain the size of the money that was lavished on Neumann, the CEO of a failed business model of taking out long-term leases on office real estate (to the tune of $47 billion) and then subleasing it to startups and freelancers on a short-term basis – folks who are known to flee to a home office in a downturn. The failure of this model was further evidenced by the fact that in 2018 the company had lost $1.6 billion with an escalating $900 million in losses in the first two quarters of 2019.

According to the prospectus filed with the Securities and Exchange Commission for the now-aborted IPO, JPMorgan Chase “has made loans and extended credit to Adam Neumann totaling $97.5 million across a variety of lending products, including mortgages secured by personal property and unsecured credit lines and letters of credit.”

The prospectus also revealed that JPMorgan Chase was one of three banks that had given Neumann a $500 million line of credit, of which he had already drawn down $380 million as of July 31, 2019. The line of credit was secured by shares of stock in The We Company, the parent name of WeWork.

In addition, according to multiple media reports, JPMorgan Chase was the third largest investor in the pre-IPO shares of WeWork. Clearly, it will have to take a major haircut on those investments.

The Dickensian Tale of the WeWork IPO

In the WeWork IPO, the Money Trails End Up at JPMorgan’s Doorstep

Will Jamie Dimon Finally Lose His Job Over Racketeering Charges?