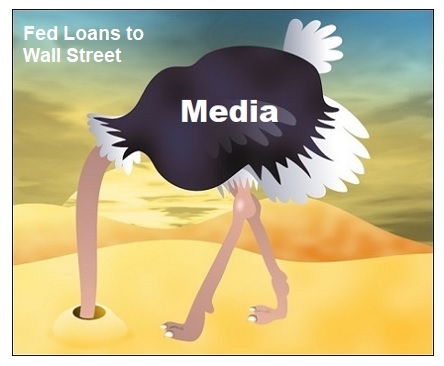 Yesterday the Federal Reserve Bank of New York (New York Fed) announced that the giant money spigot it turned on for Wall Street on September 17 would be growing exponentially beginning today.

The New York Fed will now be lavishing up to $120 billion a day in cheap overnight loans to Wall Street securities trading firms, a daily increase of $45 billion from its previously announced $75 billion a day. In addition, it is increasing its 14-day term loans to Wall Street, a program which also came out of the blue in September, to $45 billion. Those term loans since September have been occurring twice a week, meaning another $90 billion a week will be offered, bringing the total weekly offering to an astounding $690 billion. It should be noted that if the same Wall Street firms are getting these loans continuously rolled over, they are effectively permanent loans. (That’s exactly what happened during the 2007-2010 Wall Street collapse: some teetering Wall Street casinos received, individually, $2 trillion in cumulative loans that were rolled over for two and one-half years – without the authorization or even awareness of Congress or the American people. One bank, Citigroup, received over $2.5 trillion in Fed loans, much of them at an interest rate below 1 percent, at a time when it was insolvent and couldn’t have obtained loans in the open market at even high double-digit interest rates.)

This latest announcement from the Fed comes on the heels of an October 11 announcement that it is launching a program to buy up $60 billion a month in Treasury bills and that program will last into “at least” the second quarter of next year.

What the New York Fed is doing is unprecedented in U.S. history and yet you will find no mention of it on any front page of a newspaper today. This is just a partial list of what makes this action unprecedented or highly questionable:

No Wall Street crisis has been announced to the public to explain these massive loans and Treasury buybacks;

Not one hearing has been held by Congress on the matter;

Not one official elected by the American people has authorized these loans;

The loans are not being made to commercial banks (which could re-loan the money to stimulate the U.S. economy). The loans are going to the New York Fed’s primary dealers, which are stock and bond trading houses on Wall Street who count hedge funds among their largest borrowers; (See list below. There is only one bank among the 24 primary dealers.)

Many of the primary dealers are units of foreign banks whose share prices have been in freefall. The Fed is making these loans at approximately 2 percent interest – an interest rate these firms could not come anywhere close to obtaining in the open market;

These same foreign banks are counterparties to mega U.S. banks’ derivative trades – raising the suggestion that this is another bailout of Wall Street’s derivatives mess as occurred in 2008;

The Dodd-Frank financial reform legislation of 2010 was supposed to rein in this exact type of abuse by the New York Fed and, in fact, it states that Congress must be informed as to which banks are receiving the money to be sure it’s not going, once again, to failing financial institutions as happened in the last crisis;

The Government Accountability Office (GAO), when it released its audit of the Fed’s bailout programs of 2007 to 2010 chastised the Fed for failing to document the reasons it was flinging trillions of dollars to Wall Street and foreign banks. Notwithstanding the GAO’s report, the New York Fed is back to its old tricks again;

The New York Fed is owned by its members banks in its region. Representatives of these banks sit on its Board of Directors. It is thus too conflicted to be in charge of this bailout money spigot which is ultimately backstopped by the U.S. taxpayer if the New York Fed fails;

The New York Fed is the regulator of the largest bank holding companies in the U.S. But its failure as a regulator is why these same banks needed to be massively bailed out in 2008 and, apparently, again now. This system lacks any semblance of checks and balances;

The parent organizations of five of its primary dealers have admitted to criminal felony counts brought by the U.S. Department of Justice for frauds against the investing public. Bailing out felons and Wall Street firms with serial histories of wrongdoing perpetuates moral hazard and, thus, more wrongdoing and bailouts.

Just this morning the New York Fed pumped out $134.15 billion to Wall Street under its new loan programs. The $45 billion in 14-day loans was oversubscribed by $17.15 billion, meaning the demand for liquidity on Wall Street is growing, not subsiding. Congress and mainstream media failed to do their job in the leadup to the epic Wall Street crisis of 2008 and they are failing the American people again.