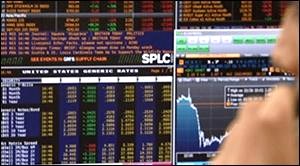 Both the Federal Reserve Board of Governors and the Federal Reserve Bank of Philadelphia (Philly Fed) have released educational videos to help the public understand the workings of our Nation’s central bank.  And, of course, there is the unparalleled digital research available to the public through FRASER, the Federal Reserve Archival System for Economic Research, made available by the St. Louis Fed. FRASER has recently provided access to new documents detailing the banking emergency of 1933 when President Franklin D. Roosevelt declared a banking holiday to assess which banks could be reopened safely and which were insolvent and had to close their doors. The 1933 banking calamity stemmed from the same type of Wall Street hubris and corruption as the 2008 crash.

Through the educational films and public resources of the Federal Reserve system itself, Wall Street On Parade has been able to reconstruct for our readers what the trading floor at the New York Fed has looked like through the ages. We are also able to tell you the following about today’s trading floor at the New York Fed: those very expensive Bloomberg terminals are in use; the trading day starts for some traders at 33 Liberty Street in lower Manhattan at 4:30 a.m. in the morning; there are approximately 60 traders on the open market desk (we don’t know if that number includes traders on the foreign-exchange desk); the Markets Group, which oversees the open market trading desk, holds two conference calls each business day with the Federal Reserve Board of Governors in Washington D.C. and/or its staff to brief them on what they are seeing in the market in terms of price action or worrisome signs.