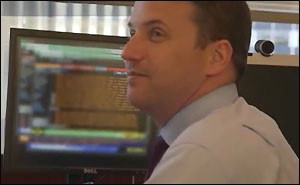 According to high priced media real estate, JPMorgan Chase and Citigroup are set to plead guilty as soon as next week to criminal charges brought by the U.S. Justice Department for colluding with other banks in the trading of foreign currencies, known on Wall Street as Forex. Guilty pleas are also expected by Royal Bank of Scotland and Barclays, while UBS, which cooperated early on in the probe, may receive a different charge.

What has not garnered any media attention, however, is the unseemly role that the perpetually blindfolded regulator, the New York Fed, has played behind the scenes as two of the nation’s largest Wall Street banks head toward becoming admitted felons.

Since January of 2014, the head of Foreign Exchange Trading at JPMorgan Chase, Troy Rohrbaugh, has served as the Chair of the Foreign Exchange Committee – a group sponsored by the New York Fed, JPMorgan’s regulator. Before Rohrbaugh became the Chair, Citigroup’s Jeff Feig chaired the Committee.  (Feig left Citigroup last year to join Fortress Investment Group LLC.)

The New York Fed’s Foreign Exchange Committee looks like an antitrust train wreck in motion. Its members are the commercial banks and investment banks that compete in foreign exchange and yet they are meeting six to eight times a year to discuss the market and set “best practices” for themselves — while some are simultaneously under criminal investigation for “worst practices.”

JPMorgan’s Troy Rohrbaugh was Chair of this New York Fed group throughout last year and is still currently chairing it, according to the most recent minutes available and his LinkedIn profile, despite the ongoing criminal investigation of JPMorgan’s involvement in rigging foreign currency trading and its settlement of civil cases for Forex abuse brought against it in November of last year by the Commodity Futures Trading Commission, the Office of the Comptroller of the Currency and the U.K.’s Financial Conduct Authority.

According to the Office of the Comptroller of the Currency (OCC), which supervises national banks, the currency rigging occurred in JPMorgan’s commercial bank which holds FDIC-insured deposits. As of March 30 of this year, JPMorgan Chase N.A. held $1.1 trillion in domestic deposits. Under the Consent Order filed November 11, 2014 by the OCC, JPMorgan Chase was charged with the following:

“While participating in multibank chatrooms, some of the Bank’s G10 spot FXtraders discussed engaging in potential misconduct with traders from other banks or market participants, including:

“(a) Discussions of coordinating trading strategies among the Bank’s traders and traders at other banks to attempt to manipulate the WM/R spot FX benchmark rates or ECB spot FX reference rates to the benefit of the trader or the bank or both and to the potential detriment to some of the Bank’s customers;

“(b) Discussions of trading, either alone or collusively, to trigger customers’ limit orders, such as stop loss or take profit orders, or customers’ barrier options for the trader or Bank’s benefit and to the potential detriment of such customers;

“(c) Discussions of trading in advance of pending customers’ orders for the trader or Bank’s benefit and to the potential detriment of such customers;

“(d) Discussions about agreements not to trade in a particular currency pair while other traders were doing so; and

The fact that all of this went on while Rohrbaugh headed up Foreign Exchange at JPMorgan (he’s been at the bank since 2005 as head of Foreign Exchange; the OCC charges spanned 2008 to 2013) has not deterred the New York Fed from keeping Rohrbaugh as Chair of its Foreign Exchange Committee and allowing him to travel to Tokyo on March 23 of this year as part of the New York Fed’s team to discuss global best practices in Forex trading with teams from other central banks.

As JPMorgan’s regulator, it would have been next to impossible for the New York Fed not to be aware that Rohrbaugh’s area of supervision at JPMorgan was the subject of multi-continent criminal investigations as he chaired this “best practices” group at the New York Fed.

The felony charges that the Justice Department is expected to bring against JPMorgan, Citigroup, RBS and Barclays are for antitrust violations. This is what the January 7, 2015 minutes of the New York Fed’s Foreign Exchange Committee indicate for how it brushes away antitrust concerns:

“Counsel circulated and discussed the Committee’s antitrust guidelines as part of the standard procedure for the first FXC meeting of the year. Counsel highlighted particular behaviors that are inappropriate and unlawful for the Committee – such as efforts to set prices or to limit access to the market. Counsel noted that it is appropriate for the Committee to work together in support of best practices.”

The New York Fed is so confident that it can create clubby Wall Street groups with impunity, that it even sponsors a Financial Markets Lawyers Group that includes counsel or general counsel from the very firms being serially charged with cartel activity in setting Libor interest rates and/or rigging foreign exchange trading.

Last November the Senate Subcommittee on Financial Institutions and Consumer Protection hauled William Dudley, President of the New York Fed, before the group to respond to multiple allegations that the New York Fed was a captured regulator. Senator Elizabeth Warren told Dudley that if he couldn’t get the job done in properly regulating Wall Street, Congress would bring in somebody who could. Clearly, that time has arrived.