President Biden, a New Book and a Poll Say American Democracy Is Under Grave Threat 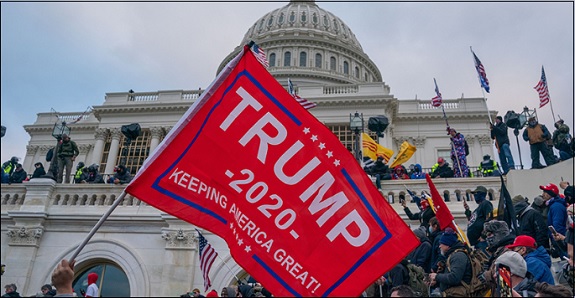 On Thursday evening, September 1, President Joe Biden addressed the nation from Philadelphia, the second location of the U.S. Capitol in its early years. During his remarks, Biden spoke these words:

“Too much of what’s happening in our country today is not normal. Donald Trump and the MAGA Republicans represent an extremism that threatens the very foundations of our republic.

“But there is no question that the Republican Party today is dominated, driven, and intimidated by Donald Trump and the MAGA Republicans, and that is a threat to this country.”

The two most important words in this excerpt from Biden’s remarks are the words “not normal.” But isolating the “not normal” events to the growth in the MAGA movement severely circumscribes the public debate that needs to be happening around why American democracy is under such a serious threat. The MAGA movement is merely a symptom of the real disease: billionaire money funneled as dark money to front groups that are fueling authoritarianism to further their own agenda.

Since 2001, long before MAGA emerged, life in the United States has been like living through an endless streaming of a badly-scripted sci-fi series. The failure of the U.S. government to come clean with the American people about unprecedented events has created a petri dish lab of paranoia that has been molded and shaped to their advantage by dark money front groups.

The attacks on the twin towers of the World Trade Center on 9/11 were “not normal.” They were the first coordinated air attacks on mainland U.S. soil in history. The collapse of century old financial firms on Wall Street in 2008 was the worst in history. The 2016 election of a President of the United States whose businesses had filed bankruptcy six times; who had admitted in a video to routinely grabbing women in their genital area; who had 16 women, at that point, alleging sexual assault or sexual harassment, was unprecedented. The 2020 pandemic was the first in the U.S. since 1918 – a span of 102 years. The attack on the U.S. Capitol on January 6, 2021 was the first since the British had invaded it in 1814 – a span of 207 years.

The cognitive dissonance created by this relentless tsunami of the macabre, the economically jarring, the upheaval in daily life from a pandemic, can turn otherwise rational citizens into unwitting puppets of political manipulators.

In her brilliant new book, They Knew: How a Culture of Conspiracy Keeps America Complacent, author Sarah Kendzior answers her nine-year old son’s question, “Who is Donald Trump?” Kendzior tells him: “A career mafia associate and sexual predator turned Kremlin asset turned game show host turned president of the United States who was friends with at least five high-powered pedophiles and who pardoned the indicted criminals who helped him in office and who runs around having rallies with them and the MyPillow Guy while they try to destroy the United States from within through riots and racism and kleptocratic alliances with transnational criminal syndicates masquerading as governments…”

The title of Kendzior’s latest book, They Knew, stems from her well documented narrative that the “not normal” events that are undermining democracy in the U.S. are the result of politicians, the legal community, and the media being part of the coverups. Kendzior has a Ph.D. in anthropology and has studied and written about authoritarian regimes. (We will publish a full review of Kendzior’s riveting new book early next week.)

Now, as if someone had flipped on a light switch, literally bringing light to vast voids of darkness, there is a growing urge to delve into the evolution of this unprecedented threat to democracy in the U.S. The urge has, no doubt, gained momentum from television viewers watching in horror in real time the attack on the Capitol on January 6, 2021; from the unprecedented televised hearings of the January 6 House Select Committee, the first of which on June 9 aired in prime time and garnered 20 million viewers; and the widely-circulated FBI photo of purloined Top Secret government documents recklessly stored at Donald Trump’s 114-room resort, Mar-a-Lago, in Palm Beach, Florida.

On August 31, Quinnipiac University released a poll which asked the question: “Do you think the nation’s democracy is in danger of collapse, or don’t you think so?” The vast majority of respondents, 67 percent, answered “yes.” Only 29 percent said “no.” Curiously, the same percentage of Republicans and Democrats (69 percent) answered “yes” to the question, while only 66 percent of Independents answered “yes.” Women, who on June 24 of this year lost a half century of the right to control their own bodies under the Supreme Court’s reversal of Roe v. Wade, weighed in with a 76 percent “yes” answer to the poll question while men came in at 58 percent.

I have carefully observed each of these “not normal” events since 2001 and my observations might help to explain why so many Americans feel their country has come unmoored and faces a clear and present danger of authoritarian rule:

On the morning of September 11, 2001 I breezily strolled through the front door of the Wall Street firm where I worked, expecting to see the smiling face of our receptionist. Instead, her face was frozen into a ghostly stare. Over the next 8-1/2 hours, the not normal would happen over and over and over. Two commercial jets would fly into two 110-story skyscrapers in lower Manhattan. Those two steel-framed skyscrapers would then collapse into their own footprints later that morning. Another steel-framed skyscraper not hit by a plane, World Trade Center Building 7, would collapse in identical fashion at 5:20 p.m. that afternoon. A total of 2,977 people would die from the attacks on the twin towers with thousands more injured. My next door neighbor, the father of two young boys, was one of them. The brother of my work colleague, with whom I watched the commercial jet hit the South Tower from his office TV, also died that day.

Today, when it comes to climate change or the pandemic, government officials lecture Americans on the importance of following the science. But when it comes to 9/11, government officials have effectively been telling Americans for two decades to ignore the scientists. We’re referring to the 3,534 architects and engineers who have signed their names to a petition to re-open the 9/11 investigation, because they feel strongly that:

“…there is sufficient doubt about the official story and therefore the 9/11 investigation must be re-opened and must include a full inquiry into the possible use of explosives that might have been the actual cause of the destruction of the World Trade Center Twin Towers and Building 7.”

Ignoring thousands of scientists who have come to a well-researched conclusion on one of the most historic events in U.S. history is not normal. It breeds lack of trust in the government.

In the span of one month, during September 2008, a litany of iconic names on Wall Street either completely collapsed or were prevented from collapsing by the secret infusion of trillions of dollars of below-market-rate loans from the Federal Reserve — during and after the 2008 financial crisis. The Fed battled the media in court for more than two years in an effort to keep the details of its bailouts a secret from the American people. This was not normal. It has bred ingrained distrust in the central bank of the United States, which continues to this day.

On September 15, 2008 Lehman Brothers collapsed into bankruptcy. According to documents released by the Financial Crisis Inquiry Commission (FCIC), at the time of Lehman Brothers’ bankruptcy, it had more than 900,000 derivative contracts outstanding and had used the largest banks on Wall Street as its counterparties to many of its trades. Lehman Brothers dated back to 1847. Its rapid demise was not normal.

September 16, 2008 brought the collapse of the giant insurer, AIG, into the arms of the U.S. government. AIG was on the hook for billions of dollars in credit default swaps with major Wall Street trading houses that it could not pay nor could it make good on its securities lending programs with the same firms. The U.S. government paid out over $90 billion to make good on these contracts in order to prop up Wall Street’s reckless speculations. (See the smoking-gun chart here.) AIG is once again owned by shareholders, publicly traded, and serving as a counterparty to Wall Street’s derivatives. That Congress passed no laws to prevent a replay of derivatives bringing down the U.S. financial system is not normal in a functioning democracy.

September 26, 2008 saw the collapse of the federally-insured bank, Washington Mutual, the largest depository bank collapse since federal deposit insurance was created in 1933. At the time of its collapse, WaMu had 2,300 bank branches in 15 states, $188 billion in deposits, and $307 billion in assets. Its assets and liabilities were sold to JPMorgan Chase – making JPMorgan Chase an even bigger threat to financial stability in the U.S. This was not normal. The five felony counts that JPMorgan Chase has received from the Justice Department since the Fed made it the largest bank in the U.S. are not normal. The Board of JPMorgan Chase and the Justice Department’s decision to leave the same Chairman and CEO, Jamie Dimon, at the helm of the bank throughout this crime spree is, decidedly, not normal.

Citigroup, which also had massive exposure to derivatives, became a 99-cent stock in early 2009. This is not normal. But because its Citibank unit was one of the largest federally-insured banks in the U.S., it received the largest bailout in global banking history to keep it alive. Between taxpayers and the Fed, Citigroup received over $2.5 trillion in bailouts from December 2007 through June 2010. The Fed is not allowed to make loans to insolvent institutions but it did so anyway in the case of Citigroup. This is not normal.

On January 3 of this year, we published this headline: There’s a News Blackout on the Fed’s Naming of the Banks that Got Its Emergency Repo Loans; Some Journalists Appear to Be Under Gag Orders. Another multi-trillion-dollar Fed bailout of Wall Street banks had mysteriously sprang up in the final quarter of 2019. The Fed withheld the names of the banks and the trillions of dollars they had received in loans for two years, and then began releasing the information on a quarterly basis as the two years expired. One would have thought that mainstream media would have been salivating for the eventual release of this information, as they had been when they took the Fed to court in 2008. Instead, Wall Street On Parade was the sole news outlet to report this story, to publish the graphs showing who got what, and to investigate the reasons for this bailout, which came months before there was a pandemic in the United States. (See our news archive of more than 100 articles on the Fed’s repo loans and other recent Fed bailouts of Wall Street here.) A news blackout by reporters assigned to regularly cover every important move by the Fed is certainly not normal. In our more than 35 years of watching the Fed and Wall Street, we have never seen anything remotely approaching this level of censorship of important Wall Street news.

The threat to our democracy is real and growing. But it didn’t start with the MAGA crowd. It started with the dark money crowd — which won’t be satisfied until it owns every member of Congress, every lifetime-appointed federal judge, and every key politician in every swing state. Until there is a groundswell in America demanding serious campaign finance reform, this is the best “democracy” that money can buy.

The Dark Money “Ring” of Charles Koch and Leonard Leo Gets an Airing Before the U.S. Senate – Followed by a Mainstream Media News Blackout