One Day After the Senate Hearing on GameStop Manipulation, Its Stock Puts on a Wild Show of Manipulation 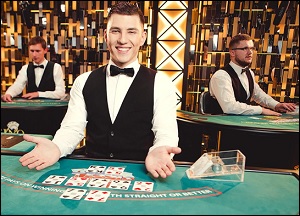 Welcome to the casino where the house always wins. One day after the U.S. Senate Banking Committee held a wide-ranging hearing on the price manipulation that is occurring in the shares of GameStop and other meme stocks, the high frequency traders and hedge funds and Dark Pools that are making a killing on this manipulation poked their fingers directly in the eyes of Senate lawmakers. They put on a wild trading show yesterday that basically said, “catch us if you can.”

GameStop is not some penny stock operating out of a boiler room in some grimy backwater of Wall Street. GameStop is a New York Stock Exchange listed stock. It has a market capitalization of $18.48 billion. But the brazen manipulation of its stock, as both the House Financial Services Committee and Senate Banking Committee conduct investigative hearings into who’s behind the manipulations, speaks volumes about how little these actors think they have to fear from Congress, the SEC and the new U.S. Attorney General, Merrick Garland, whom the Senate confirmed yesterday.

High frequency traders can make a fortune on this kind of volatility as can option traders. Market makers, who benefit from a widening spread between the bid and ask as a result of the volatility, also stand to clean up.

Over the span of yesterday’s trading session, 71,570,566 shares of GameStop were traded – which is 26 million more shares than GameStop’s float, that is, the number of outstanding shares available for trading. The high-volume trading at midday and the appearance of a concerted effort to plunge the share price at 12:17 p.m., strongly suggests the action of sophisticated, big money traders, not small retail traders hanging out on Reddit.

What happens with GameStop and other similarly manipulated meme stocks is critically important to all Americans. Rachel Robasciotti, founder and CEO of Adasina Social Capital, was a witness at the Senate Banking Committee hearing on GameStop on Tuesday and explained why it matters to all of us:

“When fast-moving, high-risk speculators dominate, we have a classic recipe for market disruptions. What we saw in January with GameStop and Robinhood is what we saw during the Great Recession with Wall Street churning out subprime, mortgage-backed securities.

“Market disruptions like this are a problem because, as stated by SEC Commissioners on January 29th, ‘…extreme stock price volatility has the potential to expose investors to rapid and severe losses and undermine market confidence.’

“Unfortunately, this volatility does not impact everyone equally. Let me paint the picture of what the everyday investor experienced. Imagine a two-job household with a couple of kids, adults working hard to make ends meet and save enough for the future. They don’t have a professionally-managed pension to fall back on for retirement, because so few pensions now exist. They know that Social Security benefits their parents receive aren’t enough to cover most retiree’s basic needs. And, for several decades now, the economy has only offered these savers historically low-interest rates, which means that putting their money in low-risk savings accounts, CDs, or bonds barely makes them enough to keep up with inflation.

“This leaves investing in the stock market as their only option. It is the only way their savings can grow enough to provide for the future. So, they are forced into the ‘stock market casino’ with their life savings. And they are being required to play against armies of sophisticated, high-risk hedge funds and Redditors duking it out for dominance. With smaller amounts, that represent all that they have to invest, sustaining significant losses (or even the perception of losses) is devastating. It makes them lose confidence and want to opt out altogether. But we know they can’t leave the casino.”

Another witness at the hearing, Dr. Teresa Ghilarducci, a Professor of Economics at The New School in New York City, wrote the following in her submitted written testimony:

“It’s well-known that individual investors underperform on average, and app-based day-trading may be making this performance gap between underperforming app trading and other portfolios worse. In general, retail investors’ returns are lower on average than returns to low-cost index funds and certainly less rewarding in terms of risk-adjusted returns to a professionally-managed defined benefit portfolio. (Barber and Odean, 2013).

“Retail investors tend to sell good stocks too soon and hold bad stocks too long — the endowment effect — and engage in myopic and salient trading patterns (a recent event is viewed as more likely to happen than it is) and they tend not to be diversified enough — professionals with a broad information base have more holdings. (Barber and Odean, 2013).

There are many subplots to what’s going on here. GameStop has just become the code word for the latest iteration of the Wall Street casino. See related articles below for a broader understanding.

GameStop Short Squeeze: These Are the Big Wall Street Players Who Stood to Make Billions

Citadel’s Ken Griffin Called to Testify at GameStop Hearing this Thursday; In Past Two Years, Republicans Got More than $60 Million of His Winnings