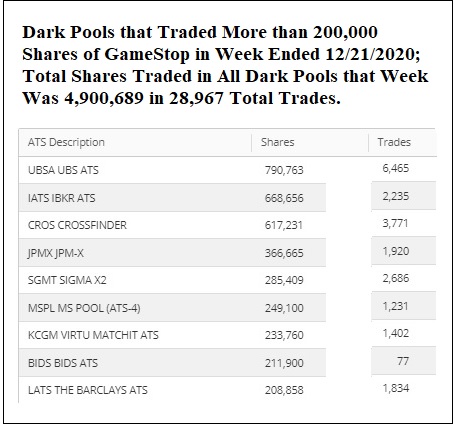 Dark Pools owned by the biggest names on Wall Street – such as Goldman Sachs’ Sigma X2, JPMorgan Chase’s JPM-X, UBS’ UBSA, Morgan Stanley’s MSPL, and Credit Suisse’s Crossfinder — have been making tens of thousands of trades in the shares of GameStop on an ongoing weekly basis.  FINRA, Wall Street’s highly compromised self-regulator, reports the Dark Pool data on a stale basis, two to three weeks after the trading has occurred. It is then lumped together for the whole week, rendering it useless in terms of monitoring price manipulation. The chart above is taken from the latest available information from FINRA. (See our previous reporting on Dark Pools in Related Articles below.)

It’s a fair guess that you haven’t heard a peep about Dark Pools on the evening news. The fact that you haven’t is a perfect commentary on why mainstream media is failing the American people when it comes to exposing Wall Street’s serial looting of the little guy.

But when a bunch of quixotic posters on a Reddit message board can be parlayed into the exciting narrative of a Robinhood band taking on the evil hedge funds, it goes viral on the evening news – sucking in hundreds of thousands more unsophisticated retail investors.

It’s important to remember who has been pumping the GameStop/Reddit story on CNBC. That would be none other than Andrew Ross Sorkin, who created a completely false narrative about who and what caused the crash of 2008 – appearing to be intentionally protecting the reputations of the mega banks on Wall Street. Sorkin’s reporting on the 2008 crash looked even more suspect when we repeatedly asked the New York Times to correct his outrageously incorrect reporting and they failed to change one word.

What’s being ignored in all the current hoopla is that the largest federally-insured banks in this country, that now double as trading casinos and Dark Pools thanks to the repeal of the Glass-Steagall Act, have every incentive to suck in the small investor at the top of a market bubble in order to create an escape route for themselves. It’s called “distribution” and it occurs, by hook or crook, at the top of every market bubble.

Wall Street On Parade previously described how the retail investor was sucked into the dot.com bubble as follows:

“First, Wall Street brokerage firms issued knowingly false research reports to the public to trumpet the growth prospects for a specific company; second, the firms lined up big institutional clients who were instructed how and when to buy at escalating prices to make the stock price skyrocket. This had an official name inside the walls of the manipulators: ‘laddering.’ Next, managers of the fleets of stockbrokers at the various brokerage firms instructed their flock to stand pat as the stock prices soared. If the stockbroker tried to get his small client out with a profit, he was hit with a so-called ‘penalty bid,’ effectively taking away his commissions on the trade. This sent the clear warning to other stockbrokers to leave their clients in the dubious deals. Only the wealthy and elite were allowed to capture the bulk of profits on these deals.

“One other practice was called ‘spinning.’ This is how the SEC explained that technique in its charges against brokerage firm Salomon Smith Barney:

“Jack Grubman, a stock analyst at Salomon Smith Barney, was at the center of this era of collusion. He was charged by the SEC for ‘fraudulent research.’ He never went to trial or was criminally charged. He paid a $15 million fine, was barred from the industry, and walked away. His haul while at Salomon Smith Barney according to the SEC, ‘exceeded $67.5 million, including his multi-million dollar severance package.’ ”

It’s also important to remember who doesn’t like hedge funds that expose fraudulent stocks or over-valued stocks. That’s the same mega Wall Street banks that may have just issued buy ratings on these fraudulent or over-valued companies. (See WeWork’s Unraveling Is Another Indictment of Wall Street’s Universal Bank Model.)

Before you buy into the David versus Goliath saga of GameStop, it would be wise to step back and do some homework on what’s really going on.

The Silence on Wall Street’s Dark Pools Is Deafening