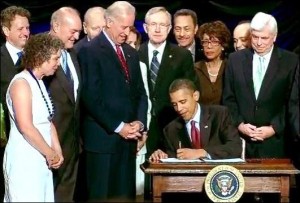 Today marks the 10th Anniversary of the enactment of the Dodd-Frank Wall Street Reform and Consumer Protection Act, named after its two sponsors, former Senator Christopher Dodd (D-CT) and former Congressman Barney Frank (D-MA). The massive piece of legislation was signed into law on July 21, 2010 by President Barack Obama at a time when Democrats controlled both houses of Congress – meaning there was no excuse not to put tough Wall Street reform legislation in place.

The result was that the Wall Street wing of the Democrats won and 2300 pages of mostly worthless “reform” measures were signed into law.

As historians look back on this era, Dodd-Frank will be seen as the seminal failure of the Obama administration. Below is a recap of what happened during the financial crisis of 2007 to 2010 and how Dodd-Frank has failed miserably from preventing it from happening again.

Federally-Insured Banks Blow Up from Derivatives: Thanks to the repeal of the Glass-Steagall Act in 1999 during the Clinton administration, by 2008 almost every major investment bank on Wall Street owned or had merged with a federally-insured, deposit-taking bank. JPMorgan owned the sprawling Chase bank; Citigroup owned Citibank; Lehman Brothers owned two federally-insured banks while Merrill Lynch owned three.

With the exception of JPMorgan Chase, every one of the above-named institutions would blow up and require massive, secret bailouts from the Federal Reserve. Despite receiving $183 billion in secret emergency loans from the Fed, Lehman Brothers filed bankruptcy. It took $2.5 trillion in cumulative, secret Fed loans for two and one-half years to resuscitate Citigroup; and it took $1.9 trillion in cumulative Fed loans to make Merrill Lynch viable enough for Bank of America to buy it at the height of the crisis in September 2008.

Unfortunately, there was no formal government audit of what the Federal Reserve had done until a year after the Dodd-Frank legislation was passed by Congress.

When the Government Accountability Office (GAO) released its audit of the Fed loans in July 2011, it found that the Fed had secretly sluiced over $16 trillion, much of which had been made in almost zero interest rate loans, to Wall Street banks as well as foreign banks. At the time the news broke, Senator Bernie Sanders said: “No agency of the United States government should be allowed to bailout a foreign bank or corporation without the direct approval of Congress and the president.”

But there has not been any ruckus in Congress as the Fed has engaged in another massive bailout and pumped more than $9 trillion cumulatively into its primary dealers in almost zero interest rate repo loans since September 17 of last year. Of the Fed’s 24 “primary dealers,” half are units of foreign banks. And despite a promise from both Fed Chairman Jerome Powell and the Vice Chair for Supervision, Randal Quarles, to provide transaction level information on to whom its trillions of dollars are going, the public doesn’t know where a dime of the repo loans went nor do we know where a dime of the Fed’s Primary Dealer Credit Facility bailout program has gone.

The $16 trillion in secret bailout loans made by the Fed that the GAO had located in 2011 was only the tip of the iceberg. When the Levy Economics Institute added in other Fed bailout programs that the GAO had not included, the actual tally came to $29 trillion.

While the Fed was secretly conducting the most unprecedented bailout of Wall Street banks in history from December 2007 through at least the middle of 2010, millions of Americans were struggling to make the mortgage payment on their home as a result of losing their job to an economic crisis caused by these very banks. Then those same banks moved in to foreclose on millions of homeowners, while secretly receiving these windfall bailouts from the Fed. In the case of Citigroup’s Citibank, it sometimes hid behind an alias of Liquidation Properties to foreclose on homes.

Because mainstream media is obsessed with coverage of the COVID-19 pandemic, to the exclusion of the latest massive bailout by the Federal Reserve to the very same banks it bailed out the last time around, Wall Street On Parade has become the sole archiver of what the Fed is doing. (See our archives in timeline order here.)

Is this really the way that American democracy should work? Giant, corporate-owned media outlets can’t find the time or inclination to report on the second largest bailout of Wall Street in U.S. history and Congress can’t summon the courage to conduct an investigation into the matter.

Dodd-Frank’s Failure to Reform Derivative Exposure at the Banks: Another failed aspect of Dodd-Frank was that instead of breaking up the banks, it offered a “push-out” rule, meaning derivatives could not be held in the federally-insured part of the bank holding company but had to be pushed out to another unit that could be wound down in bankruptcy. Citigroup made swift work of repealing that measure in December 2014, thus crippling an essential part of financial reform.

Then there was the promise that the secret, private contracts between banks (known as OTC Derivatives or Over-the-Counter), would migrate to centrally-cleared trades. In fact, in a press conference on March 7, 2016, President Obama stated the following:

Obama’s statement was completely false. The “vast majority” of derivative trades were still over-the-counter and not being handled by central clearinghouses. We know that because the regulator of national banks, the Office of the Comptroller of the Currency (OCC), releases a quarterly report on derivatives held by the banks in the U.S. The report it released prior to the Obama press conference stated this:

In other words, Obama had his facts exactly backwards. The “vast majority,” 63.1 percent of derivatives, were still being traded in the dark.

The most recent report from the OCC states this:

“The percentage of centrally cleared derivatives transactions increased quarter-over-quarter to 42.3 percent in the first quarter 2020.”

A decade after Dodd-Frank reform, the majority of derivatives trades are still located at the federally-insured bank and the majority are still not centrally cleared. In addition, derivatives are now concentrated at just four bank holding companies: JPMorgan Chase, Citigroup, Goldman Sachs and Morgan Stanley.

Dodd-Frank Failure to Reform Credit Rating Agencies: Another epic failure of Dodd-Frank was failure to reform the rating agencies that had given triple-A credit ratings to dodgy subprime CDOs (Collateralized Debt Obligations) that were destined to generate tens of billions of dollars of losses. The problem was that the banks were allowed by Congress to directly pay the credit-rating agencies for those embellished ratings. The same system remains in place today.

Dodd-Frank’s Failure to Stop the Banks from Gambling with Depositors’ Money: The Volcker Rule was supposed to stop Wall Street banks from using depositors’ money from the federally-insured bank to make risky gambles for the house (proprietary trading). The Volcker Rule has been gutted beyond recognition and is essentially worthless. Just how worthless the rule was became apparent in 2013 when the Senate’s Permanent Subcommittee on Investigations released a 300-page report that found that JPMorgan Chase had used hundreds of billions of dollars of depositors’ money at its federally-insured bank to gamble in exotic derivatives in London, losing $6.2 billion along the way.

In the 2016 presidential election, both Democrats and Republicans had restoration of the Glass-Steagall Act as part of their platforms. U.S. Treasury Secretary Steve Mnuchin quickly dispelled the idea that this had been a good faith promise shortly after Trump’s inauguration.

So here we are today, watching the Fed conduct another secret multi-trillion dollar bailout of Wall Street while the voices of Congress and mainstream media are nowhere to be heard.