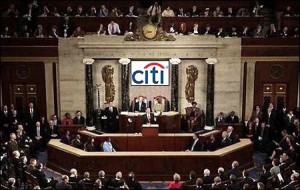 Citigroup is the Wall Street mega bank that forced the repeal of the Glass-Steagall Act in 1999; blew itself up as a result of the repeal in 2008; was propped back up with the largest taxpayer bailout in the history of the world even though it was insolvent and didn’t qualify for a bailout; has now written its own legislation to de-regulate itself; got the President of the United States to lobby for its passage; and received an up vote from both houses of Congress in less than a week.

And there is one more thing you should know at the outset about Citigroup: it didn’t just have a hand in bringing the country to its knees in 2008; it was a key participant in the 1929 collapse under the moniker National City Bank. Both the U.S. Senate’s investigation of the collapse of the financial system in 1929 and the Financial Crisis Inquiry Commission (FCIC) that investigated the 2008 collapse cited this bank as a key culprit.

“…we do not accept the view that regulators lacked the power to protect the financial system. They had ample power in many arenas and they chose not to use it. To give just three examples: the Securities and Exchange Commission could have required more capital and halted risky practices at the big investment banks. It did not. The Federal Reserve Bank of New York and other regulators could have clamped down on Citigroup’s excesses in the run-up to the crisis. They did not. Policy makers and regulators could have stopped the runaway mortgage securitization train. They did not…Too often, they lacked the political will – in a political and ideological environment that constrained it – as well as the fortitude to critically challenge the institutions and the entire system they were entrusted to oversee.”

The words above from the FCIC also perfectly describe what just happened in Congress and the Oval Office. Citigroup snuck its deregulation legislation into the $1.1 trillion Cromnibus spending bill that will keep the government running through next September. (It’s called Cromnibus because it’s part Continuing Resolution or CR and part omnibus spending bill.) Just as the FCIC wrote about the reasons for the financial collapse, Citigroup was able to pass this outrageous deregulation legislation because the majority of Congress and the President “lacked the political will” and the “fortitude to critically challenge the institutions and the entire system they were entrusted to oversee.”

What Citigroup has now done with the willing participation of Congress and the President is to set the country up for the next financial collapse in which it appears destined to play another starring role, seeing that the Fed gave it a failing grade on its stress test this year. The legislation that was just passed by Congress allows Citigroup and other Wall Street banks to keep their riskiest assets – interest rate swaps and other derivatives – in the banking unit that is backstopped with FDIC deposit insurance, which is, in turn, backstopped by the U.S. taxpayer, thus ensuring another bailout of Citigroup if it blows itself up once again from soured derivative bets.

According to Bloomberg data, over the past five years – when Dodd-Frank financial reform was supposed to be making these mega banks safer – Citigroup has increased the notional amount of derivatives on its books by 69 percent. As of this past June, according to Bloomberg, “Citigroup had $62 trillion of open contracts, up from $37 trillion in June 2009.” That’s trillion with a “t.”

How much might Citigroup need from the taxpayer if it blows up again? According to the General Accountability Office, Citigroup received more bailout assistance than any other bank in the last collapse. On October 28, 2008, Citigroup received $25 billion in Troubled Asset Relief Program (TARP) funds. Less than a month later it was back with hat in hand and received another $20 billion. But its finances were so shaky that it simultaneously needed another $306 billion in government asset guarantees. And on top of all that, the New York Fed was secretly funneling it over $2 trillion in emergency loans at interest rates frequently below 1 percent.

“Citigroup’s five-day death spiral last week was surreal. I know 20-something  newlyweds who have better financial backup plans than this global banking giant.  On Monday came the Town Hall meeting with employees to announce the sacking of 52,000 workers.  (Aren’t Town Hall meetings supposed to instill confidence?)  On Tuesday came the announcement of Citigroup losing 53 per cent of an internal hedge fund’s money in a month and bringing $17 billion of assets that had been hiding out in the Cayman Islands back onto its balance sheet.  Wednesday brought the cheery news that a law firm was alleging that Citigroup peddled something called the MAT Five Fund as ‘safe’ and ‘secure’ only to watch it lose 80 per cent of its value. On Thursday, Saudi Prince Walid bin Talal, from that visionary country that won’t let women drive cars, stepped forward to reassure us that Citigroup is ‘undervalued’ and he was buying more shares. Not having any Princes of our own, we tend to associate them with fairytales. The next day the stock dropped another 20 percent with 1.02 billion shares changing hands. It closed at $3.77.

Not everyone has caved under political pressure from Wall Street. Senator Elizabeth Warren delivered three impassioned speeches on the Senate floor last week, culminating in a Friday speech that many are calling an historic battle cry to a complacent nation. Warren explained how Citigroup pulled off its coup, stating:

“Mr. President, I’m back on the floor to talk about a dangerous provision that was slipped into a must-pass spending bill at the last minute to benefit Wall Street. This provision would repeal a rule called, and I’m quoting the title of the rule, “Prohibition Against Federal Government Bailouts of Swaps Entities.”…

“Another recent Chairman of the Office of Management and Budget is also a Citi alum — but I’m double counting here because now he’s the Secretary of the Treasury.

“That’s a lot of powerful people, all from one bank. But they aren’t Citigroup’s only source of power.  Over the years, the company has spent millions of dollars on lobbying Congress and funding the political campaigns of its friends in the House and the Senate.

“Citigroup has also spent millions trying to influence the political process in ways that are far more subtle — and hidden from public view. Last year, I wrote Citigroup and other big banks a letter asking them to disclose the amount of shareholder money they have been diverting to think tanks to influence public policy.  Citigroup’s response to my letter? Stonewalling. A year has gone by, and Citigroup didn’t even acknowledge receiving the letter…”

Anticipating public outrage and potential voter backlash in 2016, incoming Majority Leader Mitch McConnell inserted another provision into the Cromnibus that allows individuals to give almost 10 times as much money to political party committees as allowed under current law – ensuring that only the super rich continue to run Washington.

Senator Bernie Sanders of Vermont was outraged, issuing a press release that stated: “Instead of cracking down on Wall Street CEOs whose greed and illegal behavior plunged the country into a terrible recession, this bill allows too-big-to-fail banks to make the same risky bets on derivatives that led to the largest taxpayer bailout in history and nearly destroyed the economy. Instead of cutting back on the ability of billionaires to buy elections, this bill outrageously gives the wealthy even more power over the political process.”

If all of this is not enough to propel Americans into the streets in mass protests, perhaps the history of how the coddled Citigroup handles the money of its investors and shareholders will stir the pot. Below is just a sampling: