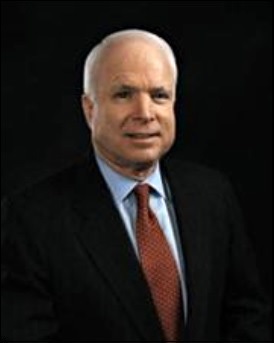 It’s not every day that one sees the names Democratic Senator Elizabeth Warren and Republican Senator John McCain as the leading co-sponsors on the same piece of legislation. But that’s exactly what happened on July 11, 2013, two years later on July 7, 2015,  and again last year on April 6. Together with Maria Cantwell (D-Washington) and Angus King (I-Maine), the four last year re-introduced the 21st Century Glass-Steagall Act, an updated version of the Banking Act of 1933, which was also known as the Glass-Steagall Act.

Senator McCain passed away on August 25, without seeing the passage of the legislation.

If enacted, the legislation would separate traditional banks that hold deposits that are insured by the Federal Deposit Insurance Corporation (FDIC) – and ultimately backstopped by the U.S. taxpayer – from the investment banks on Wall Street that underwrite securities and engage in high risk trading in stocks and derivatives. Glass-Steagall kept the U.S. banking system safe for 66 years until its repeal under the Bill Clinton administration in 1999. It took just nine years after the repeal for Wall Street to collapse in epic fashion and usher in the greatest economic downturn since the Great Depression.

Speaking about why he was co-sponsoring the legislation, Senator McCain made the following remarks on the Senate floor in 2013:

“Unfortunately, core provisions of the Glass-Steagall Act were repealed in 1999, shattering the wall dividing commercial banks and investment banks. Since that time, we have seen a culture of greed and excessive risk-taking take root in the banking world; where common sense and caution with other people’s money no longer matters.

“When these two worlds collided, the investment bank culture prevailed, cutting off the credit lifeblood of main street firms, demanding greater returns that were achievable only through high leverage and huge risk taking, which ultimately left the taxpayer with the fallout.”

The original Glass-Steagall Act of 1933 included the creation of Federally insured deposits at commercial banks for the first time. After the 1929 Wall Street crash and three-year Senate investigations that followed, it was apparent to the public that Wall Street firms were too reckless and greedy to hold Mom and Pop deposits that were insured by the taxpayer. The early 30s had seen the collapse of thousands of banks, many of which were insolvent from speculating in stocks.

Franklin D. Roosevelt became President on March 4, 1933. Two days later he closed all of the country’s banks until March 13 to stem bank runs occurring around the country. The spark that had ignited the bank runs was the collapse of the Bank of United States three years earlier. When Bank of United States collapsed, it was the fourth largest depositor bank in New York City, holding $268 million for over 400,000 small time depositors. It was the largest banking collapse in the nation’s history at that point.

The name of the bank suggested it had U.S. government backing. It did not. Media reports of the collapse fueled other bank runs around the country as there was no Federal-deposit insurance in place at that time.

Similar to the structure on Wall Street today, Bank of United States had a stock trading unit, the Bankus Corp. It was through that trading unit that the bank manipulated the price of its own stock, using the money of depositors. Bank examiners later determined that other banks had acted in a similar fashion.

Today, the largest banks on Wall Street have their own secretive trading units, called Dark Pools, where their regulators are allowing them, once again, to trade their own bank stocks and those of their competitor banks, effectively an open invitation to collusion.

A key event that galvanized Senator’s McCain’s interest and support for restoring the Glass-Steagall Act was the JPMorgan Chase scandal that became known as the London Whale in 2012. Just four years after taking tens of billions of dollars in taxpayer bailout money and almost zero-interest-rate loans from the Fed during the financial crash, JPMorgan Chase was caught engaging in unthinkable gambling in derivatives in London – using bank depositors’ money.

Senator McCain was the ranking member of the Senate’s Permanent Subcommittee on Investigations at the time its 300-page report on the London Whale was released. At the hearing on March 15, 2013 that accompanied the report, Senator McCain said this:

“This investigation into the so-called ‘Whale Trades’ at JPMorgan has revealed startling failures at an institution that touts itself as an expert in risk management and prides itself on its ‘fortress balance sheet.’  The investigation has also shed light on the complex and volatile world of synthetic credit derivatives. In a matter of months, JPMorgan was able to vastly increase its exposure to risk while dodging oversight by federal regulators. The trades ultimately cost the bank billions of dollars and its shareholders value. These losses came to light not because of admirable risk management strategies at JPMorgan or because of effective oversight by diligent regulators. Instead, these losses came to light because they were so damaging that they shook the market, and so damning that they caught the attention of the press. Following the revelation that these huge trades were coming from JPMorgan’s London Office, the bank’s losses continued to grow.  By the end of the year, the total losses stood at a staggering $6.2 billion dollars…”

The London Whale episode also exposed how Wall Street’s far flung trading venues around the globe were impossible for Federal regulators to monitor. Senator McCain noted this in his hearing remarks, stating:

“Disturbingly, the bank’s primary regulator, the OCC, failed to take action even after red flags warned that JPMorgan was breaching its risk limits. These regulators fell asleep at the switch and failed to use the tools at their disposal to effectively curb JPMorgan’s appetite for risk…After these losses were uncovered by the press, JPMorgan chose to conceal its errors and, in doing so, top officials at the bank misinformed investors, regulators, and the public.” (You can read Senator McCain’s full remarks here.)

Senator Carl Levin was Chair of the Senate’s Permanent Subcommittee on Investigations at the time. It is almost certain that both he and Senator McCain knew far more about the full scale of JPMorgan’s London trading than was revealed to the public in the report. That’s because the report alluded to the fact that JPMorgan Chase’s Chief Investment Office, the unit involved in the derivatives trading, was also planning to use depositors’ money to trade stocks. Those sections were redacted. As we wrote at the time:

“Although the ‘Redacted’ stamp has censored much of the relevant information on this stock trading, a few snippets can be pieced together. We learn, for example, that the original budget proposed for stock trading in 2006 was twice that for credit trading. The plan was to trade a maximum of $5 million in credit derivatives and $10 million in stock trading – the specific type of stock transactions have been redacted from the document while those for credit trading have been left in. Since the notionals (face amount) of the credit derivatives eventually grew to hundreds of billions of dollars by early 2012, one has to wonder what the stock-related trading grew to from a proposed $10 million since it was originally slated to be twice as large as credit trading.

“Another item that slips through is that ‘ETFs will also be treated as trading instruments.’ ETF is an acronym for ‘Exchange Traded Fund,’ portfolios of stocks that trade on stock exchanges. In a memo dated May 5, 2006 to Jason Hughes at JPMorgan from Roger J. Cole in the Compliance Department, we learn that there is a plan to trade stock market indices. The caveat is given by Cole that: ‘…compliance approval required before trading in credit/equity indices with less than 20 names as we discussed.’ ”

Behemoth Wall Street banks using depositors’ money to gamble in stock trading is so 1929. The difference today is that the unknowing taxpayer is on the hook for the bank’s losses. The only way to change that is to restore Glass-Steagall.