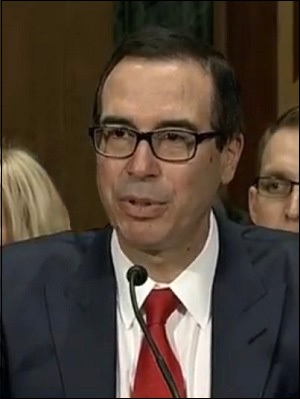 At a time of growing loss of confidence in the credibility of President Donald Trump, his Treasury Secretary, Steven Mnuchin, declared today that the Trump administration never had any intention of restoring the Glass-Steagall Act and separating the taxpayer-backstopped insured commercial banks from the high risk Wall Street investment banks.

Under intense questioning from Senator Elizabeth Warren at a Senate Banking hearing today, Mnuchin effectively said that his idea of supporting a 21st Century Glass-Steagall Act meant doing the opposite of what Glass-Steagall did: he would leave the commercial banks and investment banks under the same roof.

The Glass-Steagall legislation enacted in 1933 did only two key things: it enacted Federal insurance on bank deposits to restore confidence in the country’s deposit-taking banks at a time of unprecedented defaults tied to Wall Street gambles and it barred those insured commercial banks from combining with Wall Street investment banks going forward. That legislation protected the U.S. banking system for 66 years until its repeal in 1999. Nine years later, Wall Street crashed again in epic fashion, blowing up large insured banks like Citigroup, Wachovia and Washington Mutual, along with century old investment banks like Lehman Brothers.

Senator Warren at one point called Mnuchin’s remarks “crazy” and “like something straight out of George Orwell.” Indeed they were. (See video below.) 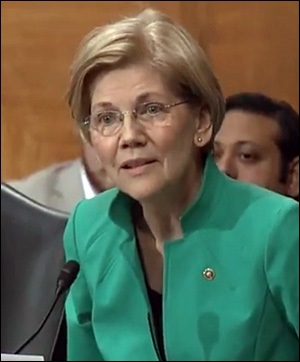 After reminding Mnuchin that the President had stated that he supported a 21st Century Glass-Steagall Act while running for President and Mnuchin himself had said the same thing during his Senate confirmation hearing, Warren chided Mnuchin: “There are aspects of Glass-Steagall that you support, but not breaking up the banks, and separating commercial banking from investment banking?” Warren said. “What do you think Glass-Steagall was, if that’s not right at the heart of it?”

As the surreal exchange continued, Warren showed exasperation with Mnuchin’s preposterous position, stating: “So let me get this straight,” Warren said. “You are saying that you’re in favor of Glass-Steagall, which breaks apart the two arms of banking…except that you don’t want to break apart the two parts of banking.”

Warren suggested that Trump and Mnuchin had reversed their position under pressure from Wall Street, stating: “In the past few months, you and the President have had a number of meetings with big bank CEOs and lobbyists. Is that the reason for the reversal on Glass-Steagall?”

Mnuchin said “No, not at all.” He said there had been no reversal. The Republican Party platform promised the following:

“The Dodd-Frank law, the Democrats’ legislative Godzilla, is crushing small and community banks and other lenders…We support reinstating the Glass-Steagall Act of 1933 which prohibits commercial banks from engaging in high-risk investment.”

On October 26 of last year, speaking at a rally in Charlotte, North Carolina, Donald Trump personally echoed the pledge in the party platform, stating:

“The policies of the Clintons brought us the financial recession — through lifting Glass-Steagall, pushing subprime lending, and blocking reforms to Fannie and Freddie. Two friendly names but they’re not so friendly. It’s time for a 21st century Glass-Steagall and, as part of that, a priority on helping African-American businesses get the credit they need.”