The Repo Crisis, Jamie Dimon, and the Bloomberg News Mystery 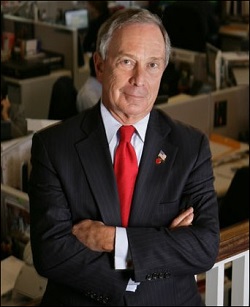 Academics and historians who attempt to compare the epic Wall Street crash of 2007- 2010 to the next one that’s inevitably coming won’t be able to count on publicly available articles from Bloomberg News. As we reported on Monday, critical articles by a top investigative reporter at Bloomberg News, Mark Pittman, that exposed the corrupt cronyism between Wall Street and the Federal Reserve have gone missing on the Internet.

Just this morning we located yet another key article from Bloomberg News that has just up and disappeared on the Internet. Put this 2008 Bloomberg headline in the Google search box with the quotes included and see what happens: “Citigroup Unravels as Reed Regrets Universal Model.”

Bloomberg News informed us that Pittman’s articles are still available on the Bloomberg terminal. That’s a market data and news terminal that hundreds of thousands of global bank traders around the world use daily. But at a cost of upwards of $20,000 or more per terminal per year, it’s not something that scholars or journalists are going to be able to afford.

This week, something else strangely went missing at Bloomberg News – a very essential part of something Jamie Dimon, Chairman and CEO of JPMorgan Chase,  said on his earnings call on Tuesday. Here’s a transcript from SeekingAlpha on what Dimon said about why his mega bank stood down from providing more assistance during the repo blowout on September 17 when overnight lending rates shot up to 10 percent and the Federal Reserve, for the first time since the financial crisis, became the lender of last resort in the overnight lending market. (The Fed has since that time continued to pump hundreds of billions of dollars a week into Wall Street trading firms.)

From the SeekingAlpha transcript:  (Dimon is speaking of his bank’s reserve account at the Federal Reserve):

“But now the cash in the account, which is still huge. It’s $120 billion in the morning, and it goes down to $60 billion during the course of the day and back to $120 billion at the end of the day. That cash, we believe, is required under resolution and recovery and liquidity stress testing. And therefore, we could not redeploy it into repo market, which we would’ve been happy to do.”

The Motley Fool reported the identical wording from the earnings call.

But when Bloomberg News reported Dimon’s remarks, it left out the part about JPMorgan’s reserve account at the Fed dropping down to $60 billion during the day. The article showed this for Dimon’s remarks:

“Now, the cash in the account, which is still huge, it’s $120 billion in the morning, that cash we believe is required under resolution and recovery and liquidity stress testing. And therefore, we could not redeploy it into the repo market, which we would have been happy to do.”

Why is it extremely relevant that JPMorgan Chase has gotten down to a cash reserve of just $60 billion during the trading day? Because Jamie Dimon has turned bragging about his bank’s “fortress balance sheet” into an art form and a $60 billion daytime cash cushion is a pretty darn skimpy safety net for a bank holding $1.6 trillion in deposits and $2.35 trillion in total assets, according to the Federal Deposit Insurance Corporation and Office of the Comptroller of the Currency, respectively.

On September 16, the day before repo rates blew out to 10 percent, they had already spiked to 5 percent from the typical 2 percent, showing a serious problem in liquidity. Something else newsworthy happened on September 16: a trading desk at JPMorgan Chase was charged with being a criminal enterprise by the U.S. Department of Justice and three of its precious metals traders were criminally indicted under RICO charges, a statute typically reserved for organized crime. Despite the puff pieces on Jamie Dimon that have run at Bloomberg News and Barron’s, the sad truth is that under Dimon’s tutelage, JPMorgan Chase has become a three-count felon and its traders are now being charged under RICO.

The billionaire owner of the publishing and data empire that includes Bloomberg News is a Wall Street veteran and, subsequently, the former Mayor of New York City, Michael Bloomberg. Forbes currently puts his wealth at a staggering $51.6 billion. The bulk of that wealth derives from the hundreds of thousands of those Bloomberg terminals sitting on thousands of trading desks at global banks like JPMorgan Chase, Citigroup, Goldman Sachs and even the Federal Reserve Bank of New York – where all of that low-cost money for Wall Street is being magically created with a push of an electronic button. (See The Official Video from the Federal Reserve on How It Creates Electronic Money.)

Bloomberg News has previously come under fire for spiking stories that may have been counter to the business interests of Michael Bloomberg and ridiculously cheering for Wall Street banks while they continued their serial abuse of the public’s trust.

In 2016, Matt Winkler, Editor-in-Chief-Emeritus at Bloomberg, wrote a sycophantic piece titled “Stop Bashing Wall Street. Times Have Changed.” That was the year after JPMorgan Chase had admitted to its third felony charge and every major Wall Street bank was still involved in trillions of dollars in notional derivatives contracts. The same year, Michael Bloomberg showed very poor judgement in co-authoring an OpEd with Jamie Dimon, a man who should have been the target of investigative pieces by his reporters for presiding over three felony counts and $36 billion in fines for serial crimes against the investing public.

In 2015 Politico’s Luke O’Brien deeply reported the details of a Bloomberg News article that was critical on China and appeared to have been spiked to preserve business sales of the Bloomberg terminal in that country.

And then there are those strange associations with felony counts or fines at Wall Street banks and those Bloomberg terminals. The chat rooms that facilitated the rigging of the Libor interest rate benchmark were conducted on Bloomberg terminals. According to Mark Pittman, the Bloomberg terminal had the capability of allowing hedge funds to find the worst dreck in the subprime arena, making it possible to short the instruments while hedge funds like John Paulson’s got big banks like Goldman Sachs to sell the other side of the deal to its unwitting investors.

During the Democratic debates earlier this week there was talk of revitalizing anti-trust in America to break up dangerous corporate concentrations of power. We need to expand that debate to breaking up media empires that have deep conflicts with Wall Street, the most corrupt industry in America.