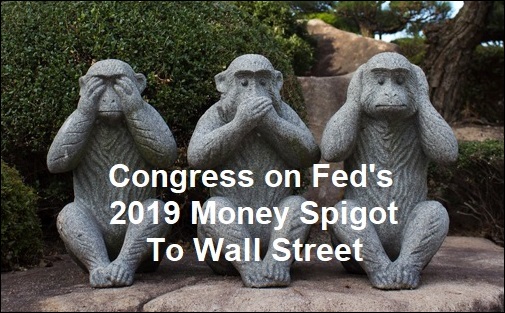 Shhh! Don’t tell Congress that the Federal Reserve is back to electronically creating money out of thin air to throw at a liquidity problem (of an, as yet, undetermined origin) on Wall Street. And be sure not to mention that the Fed’s balance sheet has shot up in a period of just 42 days by $253 billion. And, of course, don’t remind Congress that before the last Wall Street crisis was over the Fed had secretly, with no oversight from Congress, piled up a $29 trillion tab to bail out Wall Street — a fact it fought years in court to keep under wraps.

On September 4, 2019, the Fed’s assets on its balance sheet stood at $3.761 trillion. As of October 16, that figure is $4.014 trillion, edging closer to the $4.5 trillion peak it reached in 2015 following the worst Wall Street crash since the Great Depression.

Here’s the simple and accurate way to look at this: the Federal Reserve Bank of New York is the regulator of the Wall Street bank holding companies which have never stopped functioning as casinos since the crash of 2008 because Congress did not have the guts to write legislation that would genuinely reform Wall Street. The Fed was a failed regulator in 2008 and it’s an even bigger failed regulator in 2019. To compensate for its own hubris, the Fed simply pumps out electronically created money to prop up a banking structure that is as doomed today as it was in 2008.

Corporate media is part of this hubris by failing to put on the front pages of newspapers the fact that the Federal Reserve is back to bailing out Wall Street – which is the only way to get the attention of the public and Congress.

Just take a look at the hearings calendar at the U.S. Senate Banking Committee for the month of October. One would never suspect that there is a liquidity crisis on Wall Street judging from the hearings that this august body has scheduled. Please also note that the Fed’s pump priming operations began on September 17 and in a month’s time neither the House Financial Services Committee nor the Senate Banking Committee has seen fit to hold a hearing and ask the Fed and the mega Wall Street bank CEOs why they are drinking at the Fed’s money trough again.

Nomi Prins’ brilliant book, Collusion: How Central Bankers Rigged the World, that was released in May of 2018 presciently saw this day coming. Prins wrote “Eight years after the crisis began, the Big Six US banks – JPMorgan Chase, Citigroup, Wells Fargo, Bank of America, Goldman Sachs, and Morgan Stanley – collectively held 43 percent more deposits, 84 percent more assets, and triple the amount of cash they held before. The Fed has allowed the biggest banks on Wall Street to essentially double the risk that devastated the system in 2008.”

What the Fed is doing with its money spigot today is exactly what Prins explains in her book that it did during the last crisis. Prins writes that the largest Wall Street banks “that inhaled this cheap money were not required to increase their lending to the Main Street economy as a condition of the availability of that money…Wall Street used its easy access to cheap money to increase speculation in derivatives and other complex securities. They used it to buy back their own shares, thus effectively manipulating their own stock – in broad daylight and with explicit approval from the Fed.” Equally problematic writes Prins, “these banks dialed back their lending to small and midsized businesses, which hampered their growth potential.”

In just the past three days, the Federal Reserve has infused the following amounts into Wall Street trading firms: $75 billion on Wednesday; $104.15 billion on Thursday; and $56.65 billion this morning. On Wednesday, Wall Street firms asked the Fed for $80.35 billion, in other words, more than the $75 billion the Fed was willing to provide, suggesting that the liquidity crisis is not abating.

The Fed has not shared with the public which banks are drawing down the bulk of the money; why there is this continuing daily need for the money; and what the core roots of this liquidity crisis are.

The Chairs of the Federal Reserve have ably demonstrated a willful blindness to Wall Street’s corruption and hubris since Alan Greenspan was at the helm. After Greenspan had presided over the worst crime spree in the history of Wall Street while deluding himself with the farcical idea that Wall Street would police itself, he had this to say to a House Oversight Committee hearing on October 23, 2008 in the midst of the worst Wall Street collapse since the Great Depression:

“So the problem here is something which looked to be a very solid edifice. And, indeed, a critical pillar to market competition and free markets, did break down. And I think that, as I said, shocked me. I still do not fully understand why it happened and, obviously, to the extent that I figure out where it happened and why, I will change my views. If the facts change, I will change.”

Those words should be viewed within the context of the fact that Greenspan took a job advising a notorious hedge fund, Paulson & Company, after leaving the Fed. Paulson & Company was an intricate part of the scandalous Abacus deal with Goldman Sachs.

More recently, on June 27, 2017, then Federal Reserve Chair Janet Yellen had this to say at the British Academy in London:

“Would I say there will never, ever be another financial crisis? You know probably that would be going too far, but I do think we are much safer, and I hope that it will not be in our lifetimes and I don’t believe it will be.”

We predict that Yellen is going to seriously regret ever uttering that last sentence.