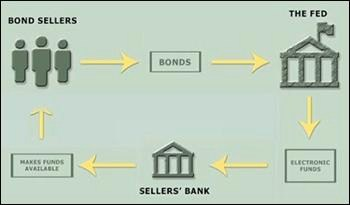 Official Graphic From the Federal Reserve Showing How It Creates Money

Unless you’ve been lost at sea since 2008, you’ve likely heard time and again that the Federal Reserve is creating money out of thin air. Type the words “Federal Reserve creates money AND thin air” into the Google search engine and you’ll find about 2.4 million people weighing in on the subject, including folks at PBS.

There’s no reason for the debate. The Federal Reserve has put out its very own video explaining how it creates money. It prefers the phrase “newly created electronic funds” to the colloquial “out of thin air.”

The video is narrated by Steve Meyer, a Senior Advisor to the Federal Reserve Board of Governors, who explains how the Fed has been paying for those trillions in bond purchases since the 2008 crash. Meyer says on the video:

“You may wonder how the Federal Reserve pays for the securities it buys. The Fed does not pay with paper money. Instead, the Fed pays the seller’s bank using newly created electronic funds; and the bank adds those funds to the seller’s account. The seller can spend the funds, or, can simply leave them in the bank. If the funds stay in the bank, then the bank can increase its lending, purchase more assets, or build up the reserves it holds on deposit at the Fed. More broadly, the Fed’s securities purchases increase the total amount of reserves that the banking system keeps at the Fed.”

The Fed has even included a cute little graphic, included above, to educate the public on how this all works.

The Fed has chosen an interesting choice of words in the quotation above, making it seem like the seller of the bonds from whom it is buying and “the seller’s bank” are two separate entities. That could have been the case before the repeal of the Glass-Steagall Act, which prohibited commercial banks holding insured deposits from merging with high-risk-taking investment banks and brokerage firms. Today, the Fed is typically buying its $85 billion a month in bonds from behemoths like JPMorgan Chase and crediting the account of JPMorgan Chase – all one entity; same thing with most of the other largest Wall Street banks. (Note that in the graphic the Fed is showing an image of people as the sellers, not a Wall Street bank.)

The legions of economists at the Fed know that the trillions of “newly created electronic funds” it is pumping out need to actually make it into the real economy to create jobs and improve the standard of living of ordinary Americans. But the massive bank mergers the Fed has approved are creating a blockade against that happening.

Bank of America, JPMorgan Chase, Wells Fargo & Co. and Citigroup, now control a combined $3.511 trillion in domestic deposits, a stunning 58.8 percent of all 6,940 U.S. banks’ domestic deposits of $5.966 trillion. The market share of these four giants has increased by an astonishing 24 percent in just 4 years.

We got an unpleasant look at what JPMorgan Chase was doing with its deposits when the U.S. Senate’s Permanent Subcommittee on Investigations released a lengthy report in March of this year on the bank’s London Whale debacle.

According to documents in the report, as of the close of business on January 16, 2012, JPMorgan’s Chief Investment Office held $458 billion notional (face amount) in domestic and foreign credit default swap indices. Of that amount, $115 billion was in an index of corporations with junk bond ratings, which the bank was not allowed to own. To get around that, according to the Office of the Comptroller of the Currency, JPMorgan “transferred the market risk of these positions into a subsidiary of an Edge Act corporation, which took most of the losses.” An Edge Act corporation refers to the ability of a bank to obtain a special charter from the Federal Reserve. By establishing an Edge Act corporation, U.S. banks are able to engage in investments not available under standard banking laws.

JPMorgan was not making loans to worthy businesses to help create jobs for the unemployed, it was engaging in high risk gambles on exotic derivatives, out of its London offices, far from the prying eyes of its regulators. The gamble soured and it lost at least $6.2 billion of depositor funds.

There is now a growing concern that the Fed’s ability to press a button and create trillions of dollars in money for the banking behemoths to deploy as they see fit is causing a stock market bubble and setting up the U.S. for another crash. During the recent confirmation hearing of Janet Yellen, the nominee to be the next Chairman of the Federal Reserve Board of Governors, Yellen was asked about this. She responded: “To the extent that low interest rates do have an impact on asset prices, these policies have  probably to some extent boosted the stock market…”

In June of this year, Thomas Hoenig, former President of the Federal Reserve Bank of Kansas City and now Vice Chair of the FDIC, told the House Financial Services Committee that the largest Wall Street banks are “woefully undercapitalized.” He characterized the situation as a “very vulnerable financial system.” Hoenig is considered an insider’s insider. He was a member of the Federal Reserve System’s Federal Open Market Committee (FOMC) for 20 years, from 1991 to 2011. The FOMC is the body that decides when to create money and when to drain it away.

Hoenig believes the only means of reining in the abuses of Wall Street is to separate the insured banks from their casino cousins by restoring the Glass-Steagall Act. Wall Street On Parade strongly agrees with that assessment.