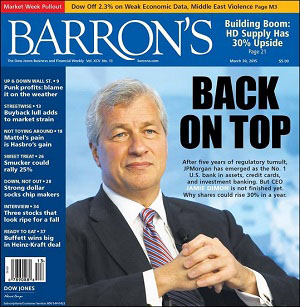 Barron’s should have published its gushing cover story on Jamie Dimon’s stewardship of JPMorgan today – as an April Fool’s joke.

The nation’s largest bank is operating under a deferred prosecution agreement until at least next January for two felony counts it received in the Madoff swindle, the largest Ponzi scheme in history.  It’s under a current criminal investigation over potential rigging of the foreign exchange markets with the New York Times reporting on February 10 that federal prosecutors had informed JPMorgan and three other banks “that they must enter guilty pleas to settle the cases.” Barron’s sister publication, the Wall Street Journal, reported on February 24 that JPMorgan is one of the 10 banks being investigated by the U.S. Justice Department for potential rigging of gold and other precious metals.

Against that backdrop, Barron’s comes up with this: JPMorgan is “Back on Top.” Back on top of what – its serial crime spree? The article, by Associate Editor Andrew Bary, goes downhill from there. Here’s a few howlers.

Jamie Dimon, Chairman and CEO of JPMorgan, who has kept his job through a rising tide of scandals at the bank, says in the article: “We were tried, tested, and true during the worst of times.” Compare that assessment to the findings of former Senator Carl Levin in 2013 after his Permanent Subcommittee on Investigations released a 306-page report on how JPMorgan had gambled with bank deposits in the infamous London Whale scandal at the bank and eventually lost at least $6.2 billion of those deposits. Levin said at the time that JPMorgan “piled on risk, hid losses, disregarded risk limits, manipulated risk models, dodged oversight, and misinformed the public.”

Bary quotes Dimon from a January call with analysts as stating that banks are “‘under assault’” from regulators, with Dimon adding that “ ‘We have five or six regulators or people coming after us on every different issue. It’s a hard thing to deal with.’ ” Shouldn’t the debate be why, after a nonstop 5-year crime spree, the nation’s largest bank still is being chased by regulators?

Another howler is Dimon telling the Barron’s reporter that the bank doesn’t take big trading positions and thus it is unfair for some investors to view JPMorgan as a black box, too complex to understand.

Last November, JPMorgan and other Wall Street banks again came under the cross-hairs of the U.S. Senate’s Permanent Subcommittee on Investigations. The Subcommittee released an eye-popping 396-page report on the physical commodity holdings of key Wall Street banks. The investigation found almost unfathomable giant positions at JPMorgan, reporting as follows:

“When the financial holding company’s physical commodities inventory of $6.6 billion is added to the bank’s metals inventory of approximately $8.1 billion – still excluding gold, silver, and all merchant banking commodity assets – and the bank’s copper, platinum, and palladium inventories of $2.7 billion are added in as well, the total market value of JPMorgan’s combined physical commodity inventories on September 28, 2012, was $17.4 billion. That $17.4 billion was about 11.75% of the financial holding company’s Tier 1 capital of $148 billion, which meant that it was more than twice the size allowed by the Federal Reserve’s 5% limit, were it to apply…

Elsewhere, Bary writes in the article:

“The bank maintains that one scary figure — some $63 trillion in notional derivatives exposure — vastly overstates the risk because of offsetting positions and other factors. It puts the credit risk of those positions at about $59 billion, and almost 90% of that is exposure to high-grade companies.”

On February 12, the Office of Financial Research (OFR), a unit of the U.S. Treasury Department that was created under the Dodd-Frank financial reform legislation, released a study of the banks that posed the greatest systemic risk to the global financial system. Using systemic risk scores that evaluated size, interconnectedness, substitutability, complexity, and cross-jurisdictional activities, JPMorgan came in with the scariest score of 5.05 for U.S. mega banks. That compares with 4.27 for Citigroup; 3.06 for Bank of America; 2.60 for Morgan Stanley; 2.48 for Goldman Sachs; and 1.72 for Wells Fargo.

One of the gushiest moments in the article comes with Bary writing that “The outspoken Dimon can also come across as the smartest guy in the room, ruffling regulators and politicians. He brings experience, passion, strategic vision, and a familiarity with minute details of the bank’s vast operations.”

Dimon’s familiarity “with minute details” of JPMorgan’s “vast operations” were nowhere to be found when he told analysts in 2012 that the rumors of wild derivative trades at JPMorgan’s London offices were a “tempest in a teapot.” The tempest in a teapot turned out to be at least $6.2 billion in losses of depositor funds. Dimon was also missing in action as JPMorgan served as the primary business checking account for Bernard Madoff’s massive Ponzi scheme.

Dimon’s failure to rein in the serial abuses at JPMorgan has led two attorneys, Helen Davis Chaitman and Lance Gotthoffer, to create a Wheel of Misfortune showcasing the mind-numbing crimes that regulators have charged against JPMorgan while offering an on-line book that maps out the underlying culture at the firm. Laurence Kotlikoff of Forbes insightfully says this about the book: “The authors’ description of the difference between Jamie Dimon’s view of himself and reality is the best thing since Jonathan Swift.”

We highly recommend the book to Barron’s Andrew Bary.