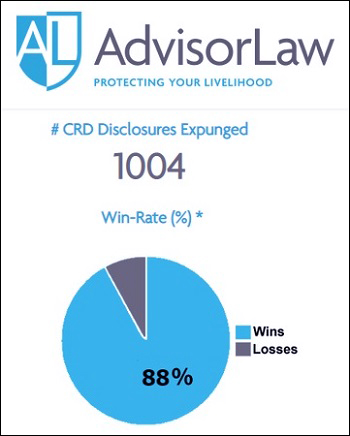 AdvisorLaw Says It Has Removed 1,004 Claims Against Brokers from their Public Records So Far in 2019

Yesterday, the Public Investors Advocate Bar Association (PIABA) Foundation released a research study showing that Wall Street’s banks and brokerage firms are back to their old tricks again in gaming the private justice system that its crony self-regulator, FINRA, has carved out for the benefit of Wall Street to the detriment of Main Street.

PIABA previously exposed how FINRA, when it was called NASD, rigged the selection process for picking arbitrators so that the croniest ones kept getting selected. PIABA released this statement on July 20, 2000:

“In direct and flagrant violation of federal law, the NASD systematically evaded the Securities and Exchange Commission approved ‘Neutral List Selection System’ arbitration rule requiring arbitrators to be selected on a rotating basis. Instead, the NASD secretly programmed its computers to select some arbitrators on a seniority basis – just what the rule was designed to prevent.”

Selecting arbitrators from a limited pool of well-paid repeat players, many with ties to Wall Street, stands in stark contrast to the jury pool selection process in our nation’s courts where potential jury members are randomly selected from tens of thousands of average citizens.

PIABA had discovered the manipulation when its attorneys attempted to test the arbitrator selection system at a conference. PIABA noted in their statement at the time that “this rule violation tainted hundreds or even thousands of compulsory securities arbitrations – many still ongoing.  In every such instance, the substantive rights of public investors to a neutral panel have been cynically violated,” wrote PIABA, adding that “Many public investors were thus twice cheated: first, by an NASD member firm that fraudulently conned them out of their life’s savings, and second by the NASD Arbitration Department’s rigged panels.”

This time around, brokerage units of big Wall Street banks like UBS and Citigroup are gaming the system by getting legitimate customer claims against their brokers purged from the public record known as BrokerCheck, a website where customers go to determine if they can trust a potential broker by looking at past charges against him or her.

Both UBS and Citigroup have not yet been able to purge their own criminal history. Both Wall Street firms were charged with one felony count each by the U.S. Department of Justice in 2015, to which they both pled guilty. Citigroup was charged with rigging the foreign exchange market while UBS was charged for its role in rigging the interest rate benchmark known as Libor.

The PIABA Foundation’s research report characterizes what has happened to BrokerCheck as follows: “It is being systematically gamed, exploited and abused with one-sided hearings, manipulation of arbitrator selection, deletion of significant customer complaints, and abusive (and possibly fraudulent) conduct to such an extent that it must be frozen immediately until the system can be fully vetted and repaired. Until such a time, BrokerCheck cannot be considered a reliable tool for investors to use when researching the background of brokers.”

By almost any measure, Wall Street is the most serially corrupt industry in America. And since Americans now permanently seem to live in the Failing Up society where no bad deed goes unrewarded, being serially corrupt thus entitles Wall Street to its own private justice system. If you want to open an investment account with any of the major Wall Street firms, you have to sign away your right to the nation’s courts and agree to take any dispute into Wall Street’s kangaroo court – which has none of the procedural protections of a courtroom, including the right to appeal. The public and media are also barred from the proceedings to keep things nice and dark like Wall Street likes it.

The private justice system for Wall Street is referred to as “mandatory arbitration” and its documented abuses over the decades are legion.

The way the system is being gamed today is that legitimate claims made by customers against a broker, which have already been decided in the customers’ favor or settled and appear on the disclosure pages at BrokerCheck, are being disappeared. The act of disappearing the disclosures is called “expungement.” This gaming of the arbitration system typically works like this: the broker files a claim against his own firm for $1. That low dollar amount usually guarantees that his claim will be heard by just one arbitrator instead of three. Since his brokerage firm and he both would like to see those customer charges removed from public record files, they pick an arbitrator that they feel will not challenge the expungement request. And to further move things along in their favor, they select law firms specializing in this expungement maneuver.

In Exhibit A released by the PIABA Foundation yesterday, two law firm names consistently show up for representing UBS and Citigroup and/or their brokers in expungement proceedings: Bressler Amery & Ross and AdvisorLaw.

One of those joining Bressler in 2010, who is still with the law firm, is Wes Holston. According to his bio, he had been “in-house counsel and Executive Director at UBS Financial Services, where he handled and supervised the firm’s litigation in 21 states and Puerto Rico.”

Another attorney bio currently listed at Bressler’s website is for David Hantman. His role at the law firm is explained as follows:

Another attorney at Bressler came from UBS in 2017, Kerry A. Zinn. The press release at the time said that Zinn “served as a senior regulatory attorney for UBS’ retail broker dealer and its employees in connection with regulatory enforcement inquiries and investigations including high profile multi-regulator investigations.”

Bressler also notes on its website that one of its current attorneys, Angela Turiano, “serves as a FINRA arbitrator.” The law firm adds that “On many occasions, her experience in this capacity has benefited them greatly in terms of navigating beyond FINRA related obstacles.”

Another firm that is frequently representing the broker when Bressler is representing the brokerage firm is a company called AdvisorLaw. Curiously, although it is regularly listed in the expungement proceeding as attorney for the broker claimant, it says on its website that it “is not a law firm and does not provide legal services. AdvisorLaw does have the expertise to advise and assist financial professionals when it’s time to defend your good name.” Why would a company put the word “Law” in its name if it’s not a law firm?

AdvisorLaw brags all over its website that it is the “800 lb. gorilla” when it comes to expungements, writing that “AdvisorLaw handles more expungement claims than the rest of the industry combined. We have never had an award confirmation denied (despite FINRA’s efforts).”

“AdvisorLaw ensures that you have the best possible representation in state court in order to expunge criminal disclosures. Not every state offers the ability to expunge old offenses, and the rules vary widely from state to state. However, if available, you may qualify to have any record of past criminal offenses sealed or destroyed and subsequently removed from your CRD [Central Registration Depository].”

The Securities and Exchange Commission has ultimate oversight over how FINRA runs its mandatory arbitration process. Unfortunately for the public, the man currently at the helm of the SEC, Jay Clayton, had represented 8 out of 10 of the largest Wall Street banks in the three years prior to coming to the SEC. Clayton came from the Wall Street go-to law firm, Sullivan & Cromwell.

The message that every American investor should take from all of this is very simple: when it comes to investing on Wall Street, you’re entering a rigged game with its own rigged, private justice system.