New York Times Misled the Public About Drownings During Hurricane Sandy. Now 11 More Have Died in New York City by Drowning in their Homes. 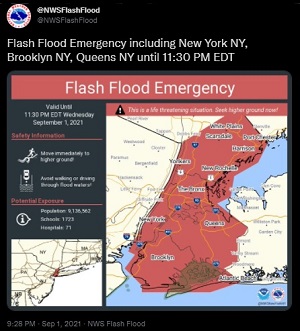 “The New York Times put it this way on Tuesday, before the death toll had climbed even higher: ‘There were 22 deaths reported in New York City, where the toll was heaviest, and 5 more fatalities elsewhere in the state. Most of all, it was the trees. Uprooted or cracked by the furious winds, they became weapons that flattened cars, houses and pedestrians.’

“Here’s the way those last two sentences should have read: ‘Most of all, it was the wall of water. Giant storm surges rushing over the sea walls, turning roads into instant rivers replete with white caps that pulled two toddlers from their mother’s arms and sent many more to a watery grave in their basements.’

An archived article of the New York Times reporting that “Most of all, it was the trees,” can be read here.

The New York Times, apparently, wanted to go along to get along with the powerful billionaire Mayor of New York City at the time, Michael Bloomberg, who couldn’t bring himself to mention the word “drowning” at the many press conferences he held during and in the days immediately after Hurricane Sandy.

On November 2, 2012, under the headline Mayor Bloomberg — Wake Up to the Suffering Around You, Wall Street On Parade reported the following:

“For three days, Mayor Michael Bloomberg has held multiple press conferences characterizing deaths from Hurricane Sandy as stepping on a downed power wire or being crushed by a fallen tree.  All the while, as we reported three days ago, the facts proved unequivocally that the vast majority of deaths resulted from drowning.”

“Three people, aged 50, 57 and 72, drowned in separate basements in the Rockaways. The 57-year old was Henry Sullivan, according to the Associated Press. A man in his 50s was also found dead in a flooded lower Manhattan basement. In Tribeca, a middle-aged parking garage worker was killed when he got trapped in the basement by flash flooding. Police found a 70-year-old woman floating in water inside a home on 98th St. in Queens about 1 a.m. Tuesday morning…

“Artur Kasprzak, an off-duty NYPD officer in his late 20s, was found drowned in the basement of his Staten Island home, after he had moved other family members to safety on higher ground in the house.”

With the basement drownings this past Wednesday night in New York City from torrential rains from Ida all over Twitter and other social media, the New York Times apparently had no choice but to report those basement drownings this time around, blaming them on illegal apartments rather than the lack of press coverage and lack of government planning over the nine year span since Hurricane Sandy.

One overarching question is why government officials did not warn residents of New York City to move to the highest levels of the homes in which they resided during the day on Wednesday. The National Weather Service had been reporting since sunrise on Wednesday that major flooding was going to occur over the entire region.

At 9:28 p.m. on Wednesday, September 1, the National Weather Service, for the first time ever, issued a “Flash Flood Emergency” for New York City, and, specifically, for two of its boroughs, Brooklyn and Queens. (Queens is where all of the reported basement drownings on Wednesday night have been reported thus far in New York City, a total of 11 with that figure certain to rise in the days ahead.)

To underscore just how urgent and dangerous the situation was, the National Weather Service Tweeted 15 minutes later at 9:43 p.m. the following:

One cannot help but wonder if lives could have been saved if government officials had issued text alerts, in the major languages spoken in New York City, with this simple message: “URGENT: Flood Emergency. If you are in a basement in Manhattan or its boroughs, get to higher ground immediately.”

Urgent text messages from official sources clearly work. The community of Mullica Hill, New Jersey experienced a powerful 150-mph, EF-3 tornado rip through homes on Wednesday. Despite a scene that looked like an aerial bombing had occurred, there were no reported deaths. Homeowners had received text messages and quickly moved to their basements, in this case a life-saving measure when the threat came from wind rather than rain.

Of New York City’s five boroughs, two are islands, surrounded by water: Manhattan and Staten Island. Two other boroughs, Brooklyn and Queens, are geographically part of Long Island, which is also surrounded by water: on the north by Long Island Sound, on the east and south by the Atlantic Ocean, and on the west by New York Bay and the East River. Only the borough of the Bronx is connected to the U.S. mainland.