The Number One Cause of Death from Sandy in New York City Was Drowning or Storm Surge Related, Despite Misleading Reports 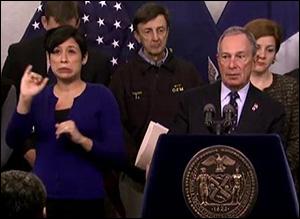 Yesterday, New York City Mayor Michael Bloomberg held two press conferences to provide updates on the aftermath of Hurricane Sandy.  At both press conferences, the nature of the deaths from the storm in New York City received short shrift.  The Mayor appeared to be saying to reporters, nothing out of the ordinary there — fallen tree, downed power wire– move along.

But then early this morning came the news that Long Island’s Nassau and Suffolk counties, with a population of almost 3 million, had just 4 deaths from the storm while New York City, with a population of roughly 8 million, had a striking 22 deaths from the storm, according to the NYPD.  (The Mayor put the figure at 18 at his second press conference yesterday.)

The New York Times ran a detailed story on storm-related deaths in New York City yesterday, going into great detail about the lives of the individuals they singled out for focus.  But the actual death count, when one looked carefully at the Times article, was just 8 individuals accounted for.  As for the major reason for the deaths, the Times said: “Most of all, it was the trees.”

Having previously lived 40 years on Long Island, where massive oaks and maples dot the landscape, it seemed impossible that only 4 deaths occurred there (two from fallen trees) while New York City, where a sea wall surge of over 13 feet of water was reported, was experiencing more fallen tree related deaths than water-related.

Each of the following sources reported only some of the deaths in New York City: New York Times, NBC, Associated Press, Wall Street Journal, New York Post and New York Daily News.  By combining the reports and filtering out duplicate reports of deaths, one unambiguous fact stands out: the major cause of death was water-related, not trees. Fourteen of the 22 deaths, or 64 percent, were from drowning, storm surge or water related. And the number of deaths is expected to rise as search and rescue operations continue.

Three people, aged 50, 57 and 72, drowned in separate basements in the Rockaways. The 57-year old was Henry Sullivan, according to the Associated Press. A man in his 50s was also found dead in a flooded lower Manhattan basement. In Tribeca, a middle-aged parking garage worker was killed when he got trapped in the basement by flash flooding. Police found a 70-year-old woman floating in water inside a home on 98th St. in Queens about 1 a.m. Tuesday morning. The body of a 55-year-old man was found in a commercial building at 90 Broad St. in lower Manhattan on Tuesday morning. According to police reports, it appeared he was carried into the building by a wall of water that crashed through the glass front of the building.

And, very slowly, the news of a massive wall of water that toppled homes into piles of debris on Staten Island is seeping out. At least 7 deaths, thus far, have occurred on Staten Island and appear related directly to drowning or the giant storm surge.

Artur Kasprzak, an off-duty NYPD officer in his late 20s, was found drowned in the basement of his Staten Island home, after he had moved other family members to safety on higher ground in the house.  The New York Daily News, which did not release his name, quoted Police Commissioner Raymond Kelly as follows: “Somehow he got trapped in his basement and he drowned in the basement.” (The multiple drownings in basements strongly suggest that even an under-thirty, physically fit NYPD officer was no match for a fast and furious wall of water that quickly filled low-lying areas.)

Another confirmed Staten Island death was a teenage girl, Angela Dresch, found dead near her demolished home on Manhattan Street in Staten Island, likely collapsed by the storm surge. Her mother, Patricia, was located alive and taken to the hospital and is in serious condition; her father as of last evening is still missing.

NBCNewYork.com reported “Two victims were found in the rubble near the Staten Island shoreline. Emergency responders say they’re finding homes that were completely flattened by a wall of water during the storm surge.”

A 51-year-old man and his 20-year-old son were found dead in the basement of a Fox Beach Avenue home on Staten Island. An 80-year-old woman, Beatris Spanola, was found dead floating in water in her flooded Staten Island home.

Our thoughts and prayers go out to the families of all those who have lost loved ones. The deaths from drowning raise uncomfortable questions for the Mayor and other City officials.  But misleading the public by blaming trees is not acceptable.  Proper planning for future emergencies requires an honest assessment of the facts and transparency with the public. The City should ask for Federal help if it’s needed to check basement apartments and  ravaged areas to see how many more individuals may be struggling to survive.