Mayor Bloomberg — Wake Up to the Suffering Around You 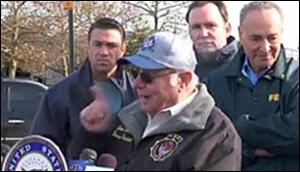 For three days, Mayor Michael Bloomberg has held multiple press conferences characterizing deaths from Hurricane Sandy as stepping on a downed power wire or being crushed by a fallen tree.  All the while, as we reported three days ago, the facts proved unequivocally that the vast majority of deaths resulted from drowning.

Yesterday, the New York Times made the sensible decision to stop believing what was coming out of the Mayor’s press conferences and called the medical examiner.  This is what the Times then reported:

“Three days after the storm hit New York, it is becoming clear how most victims died. ‘The majority of them drowned,’ said Ellen Borakove, a spokeswoman for the medical examiner’s office.”

As of early this morning, there are now a reported 21 deaths from the hurricane on Staten Island, more than 50 percent of the New York City total of 40.

The mischaracterization of deaths by the Mayor likely led to the lack of media attention to the devastation and suffering on Staten Island; and that likely led to the feeble response in food, water, dry clothing and other necessities from relief programs.  The area, which lost hundreds of homes from a giant storm surge is still without power and heat. In some homes, everything is wet and muddy, including clothing.  The people there, which includes many infants and elderly, say they are freezing at night.  Many of the streets are still impassible, making it impossible to travel by car for food and water.

The outrage of the Mayor diverting resources to the upcoming New York City Marathon when people are starving and freezing, boiled over into a media firestorm yesterday.  Staten Island borough president James Molinaro held a press conference and blasted the Red Cross for a lack of support on Staten Island.  Within hours, help was on its way.

CNN’s Erin Burnett likely saved lives by trekking around the devastation on Staten Island on camera yesterday and then grilling FEMA administrator Craig Fugate on why it took three days for FEMA to finally provide relief on Staten Island.  In fairness, if FEMA was getting the same faulty scenarios that the Mayor was handing out in his press conferences, FEMA may have been kept in the dark along with the general public.  Remember, Mayor Bloomberg refused President Obama’s request to tour New York City. FEMA and the Department of Homeland Security are slated to tour Staten Island today.

Adding to the general disgust from the hundreds of thousands in New York City with no water and no electricity and no flushing toilets and no elevators, is the New York Post story today that three giant generators, enough to power 400 homes, are deployed in Central Park for a media tent for the Marathon.  The generators were privately obtained by the Marathon sponsors but show a callous disregard or ignorance of the extreme level of suffering occurring among New Yorkers.

Mayor Bloomberg, postpone the Marathon and wakeup to the suffering around you.

The Staten Island borough president’s office offers the following suggestions for those wanting to help:

How you can help:
Donations of food, water, clothing, baby items, blankets, towels, and toiletries are needed. They can be dropped off at the following locations:

For additional information, or to learn how to make a monetary contribution, you can call the Borough President’s Helpline at 718-816-2000.