Jim Himes, a Democrat from Connecticut, chairs the House Financial Services Committee’s Subcommittee on National Security, International Development and Monetary Policy. That Subcommittee has just announced a hearing slated for September 23 at 10:00 a.m. titled: “Lending in a Crisis: Reviewing the Federal Reserve’s Emergency Lending Powers During the Pandemic and Examining Proposals to Address Future Economic Crises.” The list of witnesses for this hearing has not yet been announced.

There’s good reason for every American to be nervous about the real agenda of this hearing.

For starters, Jim Himes is a 12-year veteran of Goldman Sachs. Second, he lives in Greenwich, Connecticut – the tony enclave of hedge fund billionaires. In addition, six of his top 10 donors over his career in Congress are the mega banks on Wall Street. (See chart below.)

There is also the fact that Himes was a co-sponsor of legislation known as HR 922, a bill written by Citigroup to repeal the part of the Dodd-Frank financial reform legislation known as the “push out rule.” Under Dodd-Frank, the rule would have pushed out the most dangerous forms of derivatives from the federally-insured banking units of the Wall Street mega banks. While HR 922 was never taken up by the Senate, its language was stuffed into the must-pass spending legislation known as the Cromnibus in December of 2014. It thus became law and is responsible for today’s current derivatives nightmare on Wall Street. (See our detailed report on this Wall Street giveaway.)

Neither Wall Street nor its front men are happy with the current constraints on the Fed’s ability to lavish trillions of dollars in bailout money on the Wall Street mega banks every time they blow themselves up with their latest innovations in financial weapons of mass destruction.

These three men have been on a perpetual roadshow since September 2018 to return to the Fed the unquestioned powers it had during the 2008-2010 financial crisis, which saw the Fed deliver $29 trillion in cumulative loans over a 2-1/2 year period to Wall Street, its derivative counterparties at foreign banks, and dollar swap lines to foreign central banks.

This is the timeline for how that roadshow has progressed. The question is, will Himes’ hearing on September 23 be the next leg in this roadshow with perhaps new front men or women advancing the agenda?

September 7, 2018: Bernanke, Paulson, and Geithner jointly pen an OpEd for the New York Times titled “What We Need to Fight the Next Financial Crisis.” The trio who had served during the 2008-2010 financial crisis were effectively urging a repeal of provisions in the Dodd-Frank financial reform legislation of 2010 that were meant to rein in the Fed’s unaccountable actions in the last crisis. The trio wrote:

“Even if a financial crisis is now less likely, one will occur eventually. To contain the damage, the Treasury and financial regulators need adequate firefighting tools…But in its post-crisis reforms, Congress also took away some of the most powerful tools used by the FDIC, the Fed and the Treasury. Among these changes, the FDIC can no longer issue blanket guarantees of bank debt as it did in the crisis, the Fed’s emergency lending powers have been constrained, and the Treasury would not be able to repeat its guarantee of the money market funds. These powers were critical in stopping the 2008 panic.”

Those powers were also handy in shoring up insolvent institutions like Citigroup and teetering institutions like Merrill Lynch and Morgan Stanley. Citigroup received over $2.5 trillion in cumulative secret loans from the Fed; Morgan Stanley was sluiced $2.04 trillion; while Merrill Lynch was funneled a cool $1.9 trillion according to the Government Accountability Office’s audit of the Fed’s bailout programs that was released in July of 2011. (See page 131 of the GAO audit here.)

April 16, 2019: Bernanke, Paulson and Geithner release a paperback book titled: Firefighting: The Financial Crisis and Its Lessons. The book provided cover for the three to launch a national speaking tour to promote Wall Street’s repeal agenda. In the book they write:

“After the crisis, Tim and Ben hoped to preserve the new powers we had used to stabilize the system and secure additional authority for first responders to wind down systemically dangerous institutions in an orderly fashion in future crises. The Obama administration also proposed even stronger guarantee powers for the FDIC, to reduce the likelihood of a Lehman-type failure and reduce the need for the Fed to orchestrate one-off rescues of individual firms like Bear and AIG. But the TARP authority expired, and the final congressional version of Dodd-Frank curtailed rather than expanded the government’s firefighting tools. The FDIC’s broad guarantee authority, so effective during the crisis, was eliminated, as was the ability of the Fed to lend to individual nonbank financial firms under its 13(3) emergency powers. The Fed retained the ability under 13(3) to lend to broad classes of institutions as it had done for primary dealers, and to support important funding markets, as it had done for commercial paper, but with less discretion and less ability to take risk than before. For example, Congress limited the Fed’s discretion to judge when its loans are secured to its satisfaction, making it harder for the central bank to accept risky collateral in a future emergency. There was simply no political support for anything that could have been construed as enabling future bailouts.”

You need to carefully re-read that second to last sentence in the above paragraph. Bernanke, Paulson and Geithner appear to be arguing that it’s okay for the Fed to “accept risky collateral” in order to bail out incompetently managed Wall Street mega banks.

This is exactly what the New York Fed did during the 2008-2010 financial crisis under its Primary Dealer Credit Facility (PDCF). The New York Fed doled out $8.9 trillion in loans in that program, sometimes accepting stocks and junk bonds as collateral at a time when prices on both were collapsing. According to the GAO audit, 63 percent of the $8.9 trillion in loans from the PDCF went to just three Wall Street banks: Citigroup, Morgan Stanley and Merrill Lynch.

April 28, 2019: Bernanke, Paulson and Geithner appear on CNN to boost their pitch for giving the Fed broad powers to bail out Wall Street. Paulson makes this pitch:

“And I think the biggest reason they’re angry is in America, if we work hard and we succeed, people expect there to be rewards and when you fail, they expect you to fail and they don’t expect the government to come in and rescue. And we weren’t trying to rescue Wall Street. You know, you had to, to deal with this — there is so much concentration to deal with a problem, we had to go to the source and what we did is we put a tourniquet to stop the bleeding but, you know, because if we hadn’t done that, if we hadn’t stopped the collapse, many, many Americans would have been hurt…”

To suggest that the Fed’s efforts avoided “many, many Americans” from being hurt, is a grave insult to the 8.7 million Americans who lost their jobs and the 10 million American homes that were lost to foreclosure while Wall Street was being bailed out by the Fed. 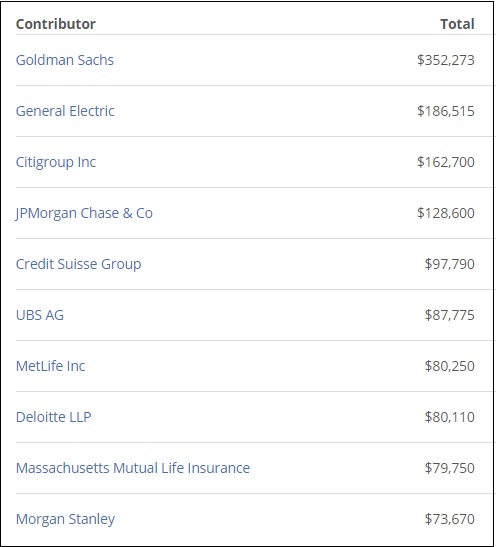 Congressman Jim Himes Largest Donors During His Career in Congress. (The money came from the companies’ PACs, their executives or employees, and those individuals’ immediate families.) Source: OpenSecrets.org