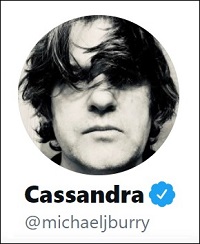 One thing is for sure. When the current stock market bubble does eventually crash, Federal Reserve Chairman Jerome Powell is not going to be able to sit before Congress and tell lawmakers that nobody could have seen it coming. Wall Street veterans have gone on record repeatedly in recent months to warn of a coming crash.

Last week Michael Burry, who heads the hedge fund Scion Asset Management and was immortalized in “The Big Short” movie for making a fortune shorting subprime debt before it collapsed in the 2008 crash, took to Twitter with the latest of these warnings. (The Tweets were subsequently deleted after they were heavily publicized in the business media and retweeted.)

On Tuesday, Burry Tweeted this:

“People always ask me what is going on in the markets. It is simple. Greatest Speculative Bubble of All Time in All Things. By two orders of magnitude. #FlyingPigs360.”

On Thursday, Burry upped the ante, warning that the crash would “approach the size of countries.” Burry wrote:

“All hype/speculation is doing is drawing in retail before the mother of all crashes. #FOMO Parabolas don’t resolve sideways; When crypto falls from trillions, or meme stocks fall from tens of billions, #MainStreet losses will approach the size of countries. History ain’t changed.”

FOMO stands for “fear of missing out.”

It should be noted that not all crashes are the best time to get rich. After the market crashed beginning in 1929 it took 25 years for the stock market to regain the peak it set in 1929. As for buying Bitcoin at $24,000, you might want to consider this: The Smartest Guys in the Room Call Bitcoin “Rat Poison Squared,” “a Colossal Pump-and-Dump Scheme” and “a Big Criminal Scam” but Federal Regulators Look the Other Way.

Last week’s warnings were just the latest of the cautionary advice coming from long-term market watchers. On April 9, Phillip Toews, who has been an investment manager for three decades, posted this on the company’s website:

“It used to be that excesses were followed by depressions, which allowed for inefficiencies to be worked out of the system. However, through efforts of the government and the Federal Reserve, the natural cycle of boom and bust seems to have been replaced by a boom boom cycle, interrupted with sporadic and spectacular temporary market crises.

“A confluence of events that includes easy money and government stimulus has created a situation where we no longer have to look back almost four hundred years to tulip-mania to wonder, ‘How could such lunacy prevail?’ We now are living with real time examples of modern, digital, tulip level bubbles. Despite these excesses, with economies re-opening and fiscal stimulus still flowing, we may still be in the early stages of what may later be viewed as the bubble to eclipse all prior bubbles….” (Read his full column here.)

The warnings have been punctuated with ever-growing cracks in the plumbing, raising the specter that a major rupture could occur at any time. In the last week of March, a hedge fund that wasn’t on anyone’s radar, Archegos Capital Management, blew itself up, bringing down by 50 percent the share prices of some of the stocks it had pumped up using 85 percent leverage. Major investment banks had made the highly-leveraged margin loans to Archegos, including Credit Suisse, Nomura, UBS, Morgan Stanley and others. It cost the banks more than $10 billion in losses when Archegos couldn’t meet the margin loans.

The debacle revealed that Wall Street mega banks were up to their old games again – secretly loaning out their balance sheets to hedge funds while simultaneously denying the public and regulators the ability to see the massive levels of concentrated risk. (See Archegos: Wall Street Was Effectively Giving 85 Percent Margin Loans on Concentrated Stock Positions – Thwarting the Fed’s Reg T and Its Own Margin Rules.)

According to the 13F filings that five of the largest Wall Street banks made with the SEC for the quarter ending December 31, 2020, they hold a combined $2.66 trillion in stock – either for themselves, their customers, or highly-leveraged hedge funds like Archegos. The breakdown is as follows:

Each of these financial institutions also own federally-insured banks. JPMorgan Chase is the largest federally-insured depository bank in the United States. In addition to its common stock holdings, the federal regulator of national banks, the Office of the Comptroller of the Currency (OCC), reports that as of December 31, 2020 JPMorgan Chase is also sitting on $2.65 trillion in stock derivatives. As we reported in early April:

“Making the situation even more jaw-dropping, of the $2.65 trillion that JPMorgan Chase holds in equity derivative contracts, 72 percent of them are private, bilateral contracts, known as over-the-counter contracts. This means that federal regulators likely have little to no knowledge of the terms of those contracts; who the counter-party is to JPMorgan Chase; if that counter-party has also obtained leverage under similar contracts at other Wall Street banks and is at risk of blowing up the whole of Wall Street if it implodes. (Think Citigroup, AIG and Lehman Brothers in 2008.)”

What has been holding this Wall Street house of cards together this long is the New York Fed’s willingness (even eagerness) to throw trillions of dollars at the problem at the earliest sign of a hiccup. The fly in this ointment is that the New York Fed is literally owned by these same Wall Street mega banks while simultaneously creating emergency bailout programs and then outsourcing the work to the banks being bailed out.

If ever there was the perfect design for a replay of the Hindenburg, this is it.