Here Are the Contracts Showing How $4.5 Trillion in Stimulus Was Outsourced to Wall Street 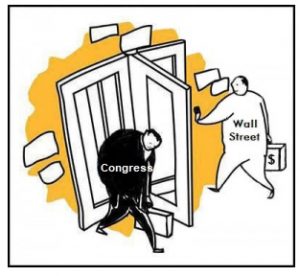 Bloomberg News has an article up today with the headline: “The Fed Loves Main Street as much as Wall Street This Time.” The article is accompanied with a graphic of Fed Chair Jerome Powell shooting equal amounts of money at Main Street and Wall Street. Nothing could be further from the truth. Despite the headline, the article by Peter Coy offers not a scintilla of evidence to support the premise that Main Street is getting a fair shake from the Fed. What the article does do is adopt the talking points the Fed has used in every press release it has issued on a new funding facility rollout – that the money will (through some magical and invisible and unexplained hand of the market Gods) make its way to American workers and households.

It’s all bunk. Here’s what is actually happening. The stimulus bill (CARES Act) stipulates that the U.S. Treasury will provide $454 billion of the $2.2 trillion total to the Federal Reserve. That $454 billion will be the loss absorbing capital to leverage the Fed’s purchases of toxic debt from Wall Street to a maximum of 10 times or $4.54 trillion. So, already Main Street is behind. Main Street is getting $2.2 trillion minus $454 billion for Wall Street and $46 billion for airlines and “national security” businesses, likely meaning Boeing. That leaves $1.7 trillion versus the $4.54 trillion that will be offered to Wall Street, or $2.84 trillion more heading to bail out Wall Street.

But the Fed had already created another Wall Street bailout program last year that is not included in that $4.54 trillion. The Fed’s repo loan program has already funneled more than $9 trillion to Wall Street in revolving loans since September 17, 2019. So that makes it $13.54 trillion for Wall Street versus possibly $1.7 trillion for Main Street, if it’s not siphoned off by loopholes in the new law. (Those repo loans, as of yesterday, were being made at the preposterous interest rate of 1/10th of one percent to Wall Street firms; firms that couldn’t even borrow at 10 percent in September.)

It has been clearly stated by Fed Chairman Powell that the U.S. taxpayer that is putting up this loss absorbing capital will eat any losses from the Fed’s funding facilities for Wall Street.

The Federal Reserve is, in turn, handing almost all of this money over to the New York Fed, which is privately owned by some of the largest Wall Street banks: JPMorgan Chase, Citigroup, Goldman Sachs and Morgan Stanley, for example. (One funding facility, the Money Market Mutual Fund Liquidity Facility, will be run by the Boston Fed.)

The New York Fed, in turn, is signing contracts faster than you can say “ripoff” with Wall Street firms that will actually be the managers of this money and decide what to pay for the toxic debt they are buying from their Wall Street pals. Another group of Wall Street firms will actually get to hold the securities that are purchased as the “custodians.” JPMorgan Chase has been the custodian of the Fed’s Mortgage-Backed Securities (MBS) purchases since the last financial crisis, despite pleading guilty to three criminal felony counts. JPMorgan Chase currently holds $1.46 trillion of the Fed’s MBS assets. (They don’t call it a captured regulator for nothing.)

This, effectively, means that the Treasury has merely laundered the money through the Federal Reserve, which has laundered it through the New York Fed, which has laundered it through a bunch of Special Purpose Vehicles (SPVs) organized in the secrecy jurisdiction of Delaware as Limited Liability Corporations (LLCs), in order to hand the money over to Wall Street asset managers. The fact that neither the Treasury nor the Federal Reserve Board are involved with the actual handling of the money is evidenced by the fact that these contracts are being signed solely by the New York Fed and the Wall Street money manager.

The large asset manager, BlackRock, has already been named by the New York Fed to manage its Commercial Mortgage-Backed Securities program (see the contract here); its Secondary Market Corporate Credit Facility (SMCCF) (see assignment here); and its Primary Market Corporate Credit Facility (PMCCF) (see announcement here). BlackRock will be allowed to buy up its own junk-bond Exchange Traded Fund (ETF) under the agreement for the SMCCF.

Citigroup and Morgan Stanley were the number 1 and number 2 largest recipients of the Fed’s emergency loan programs that secretly funneled $16.1 trillion to Wall Street from December 2007 to July 21, 2010 according to the audit conducted by the Government Accountability Office in 2011 (the nonpartisan watchdog for Congress). (See chart below.) Citigroup received below-market rate revolving loans totaling $2.5 trillion while Morgan Stanley received $2.04 trillion. Then, as now, Main Street got crumbs. See Financial Crash Analysis: $22.6 Billion in Homeowner Relief; $7.8 Trillion to Four Wall Street Banks.

BlackRock’s contract for the Agency Commercial Mortgage-Backed Securities program is also restricted to making purchases from those same 24 primary dealers of the New York Fed. (We have not yet seen the final terms for the other BlackRock-managed programs.)

The New York Fed’s repo loan program that began September 17, 2019 (long before there was any coronavirus COVID-19 crisis in the United States or anywhere else in the world) is also restricted to supplying funds to those same 24 primary dealers. (See full list below.)

And the largest of the Fed’s emergency funding facilities from the 2008 financial collapse, the Primary Dealer Credit Facility (PDCF), is back again and (wait for it) also restricted to those same 24 trading houses on Wall Street. Last time around, the PDCF accounted for $8.95 trillion (see chart below) of the $29 trillion that the Fed created out of thin air to resuscitate Wall Street banks and their trading units along with foreign banks that were the derivative counterparties to Wall Street.

The New York Fed has not yet published a management contract or custodian contract for the PDCF. It says only that the Bank of New York Mellon will be in charge of pricing the collateral on a daily basis. This raises the question as to whether anybody is custodian of this collateral.

Today’s PDCF is making loans at the same interest rate as the discount window, a contrived rate of ¼ of one percent, to some of the most dangerous Wall Street trading houses, whose parents have trillions of dollars in derivatives off their balance sheets. These banking parents are, in turn, taking the almost-free money from the Fed and continuing to charge high double-digit interest rates to struggling Americans on their credit cards. The PDCF is also accepting stocks (repeat stocks) along with other questionable securities as collateral for these ¼ of one percent loans.

We have previously called Wall Street an institutionalized wealth transfer system from the 99 percent to the 1 percent. The CARES Act puts the wealth transfer system on steroids by letting the fat cats on Wall Street keep their decade-long obscene compensation which was made by hiding their risks off their balance sheets (privatizing the profits) and now forces taxpayers to pick up the tab for the losses on the toxic debt (socializing the losses). Treasury Secretary Steve Mnuchin has said this is nothing like the 2008 financial crisis – and yet, it is everything like the 2008 financial crisis except that it’s an even more brazen money grab.