JPMorgan’s Federally-Insured Bank Holds $2.65 Trillion in Stock Derivatives; How Did It Avoid the Archegos Blowup?

“This raises the serious question as to whether the Senate Banking and House Financial Services Committees should be investigating the gamification of markets or the monetization of the stock market via Wall Street’s ownership of federally insured deposits.” 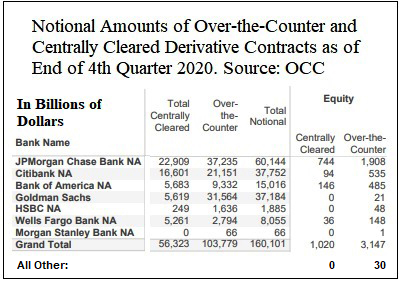 In late March, the Office of the Comptroller of the Currency (OCC) released its quarterly report on “Bank Trading and Derivatives Activities.” Graph 15 of the report shows that using data submitted by banks on their form RC-R of their call reports, JPMorgan Chase’s federally insured bank had exposure to $2.65 trillion in notional equity (stock) derivatives as of December 31, 2020. (Notional means face amount.)

Making the situation even more jaw-dropping, of the $2.65 trillion that JPMorgan Chase holds in equity derivative contracts, 72 percent of them are private, bilateral contracts, known as over-the-counter contracts. This means that federal regulators likely have little to no knowledge of the terms of those contracts; who the counter-party is to JPMorgan Chase; if that counter-party has also obtained leverage under similar contracts at other Wall Street banks and is at risk of blowing up the whole of Wall Street if it implodes. (Think Citigroup, AIG and Lehman Brothers in 2008.)

As to just how effectively the Obama-era Dodd-Frank financial reform legislation of 2010 actually reined in risk on Wall Street, the following statistic offers significant insight: According to OCC data, at the height of the financial crisis in the fourth quarter of 2008, equity derivative contracts held by federally insured banks totaled $2.2 trillion, versus $4.197 trillion today.

This raises the serious question as to whether the Senate Banking and House Financial Services Committees should be investigating the gamification of markets or the monetization of the stock market via Wall Street’s ownership of federally insured deposits.

Given the outsized exposure that JPMorgan Chase has to equity derivatives and its history of high-risk dealings that have backfired, it strikes us as peculiar that the bank has not released a statement regarding its exposure (or non-exposure) to losses from the recent blowup of the hedge fund Archegos Capital Management as a result of its highly-leveraged equity derivative contracts with some of the biggest banks on Wall Street.

Given JPMorgan Chase’s five felony counts over the past seven years for its wild risk appetite, one has to wonder if there has been no mention by it of  Archegos’ losses because it has gotten better at managing risk or simply better at managing the New York media.

One notable fact stands out. According to JPMorgan Chase’s 13F filing with the Securities and Exchange Commission for the period ending December 31, 2020, JPMorgan Chase held 23.9 million shares of Discovery Inc. common stock – one of the key stock positions that collapsed in price in late March and helped to bring down the Archegos hedge fund. According to press reports, Archegos likely owned exposure to Discovery Inc. via an equity derivatives contract with a major Wall Street bank.