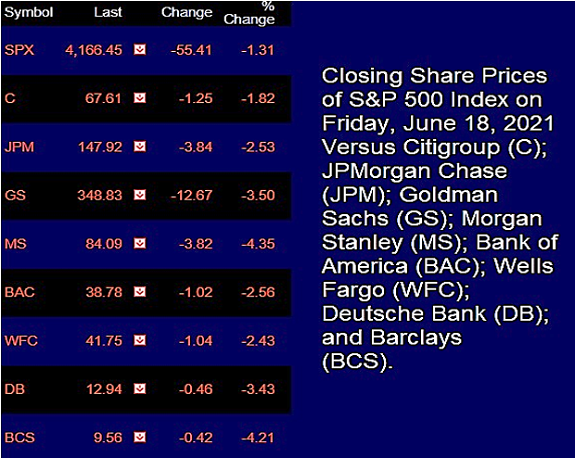 Apparently, the mega banks on Wall Street thought that the Fed was never going to take away the punch bowl. And now the Fed has indicated that it’s thinking about thinking about doing just that.

By taking away the punch bowl we mean trimming back its $80 billion in monthly purchases of Treasury securities and $40 billion in agency Mortgage-Backed Securities. And, at some point, actually starting to hike interest rates again.

Fed Chair Jerome Powel made clear during his press conference on Wednesday that trimming the $120 billion in bond purchases monthly is now very much part of the FOMC discussions. Powell said this in answer to a question about when that trimming might start:

“So I expect that we’ll be able to say more about timing as we see more data. Basically, there’s not a lot of more light I can shed on that. But you can think of this meeting that we had as the talking about talking about meeting, if you like. And I now suggest that we retire that term, which has served its purpose well, I think. So, [FOMC] Committee participants were of the view that since we adopted that guidance in December, the economy has clearly made progress, although we are still a ways from our goal of substantial further progress. Participants expect continued progress ahead toward that objective. And assuming that is the case, it will be appropriate to consider announcing a plan for reducing our asset purchases at a future meeting. So, at coming meetings, the Committee will continue to assess the economy’s progress toward our goals, and we’ll give advance notice before announcing any decision.”

Powell made another statement during his press conference on Wednesday that likely did not sit well at all with the mega banks on Wall Street that have combined exposure to hundreds of trillions of dollars in opaque derivatives, many of which are bets on ZIRP to infinity. Powell indicated that the Fed is mindful that it has to reload its interest-rate arsenal in order to be prepared for the next recession. He stated:

“A higher neutral rate would mean that interest rates would run higher by that amount. And that would be a good thing from the standpoint of the economy, because it would give the Fed more room to cut rates. The problem with interest rates being close to the lower bound, of course, is that it really cuts into our ability to react to a downturn, for example, a pandemic. And if you look, for example, at the European Central Bank, their policy rate was well below zero when the pandemic hit. So, we don’t want to be in a place where we can’t react. A higher neutral rate would be — from that narrow standpoint, would be a good thing for us. It would give us more room, and therefore then, that would tend to result in better outcomes for the economy over time.”

As the punch bowl started to spring a leak at Powell’s press conference on Wednesday, the share prices of the mega banks did the same on Thursday. The big banks put in another dreadful showing today. (See chart above.)

Below is a chart showing how the mega banks have performed versus the S&P 500 Index since June 1. It’s not a pretty picture and looks eerily like the early days of March 2020 when COVID was ravaging the country.