Lawless Coup on Wall Street Continues: GameStop Doubles in Price in One Day 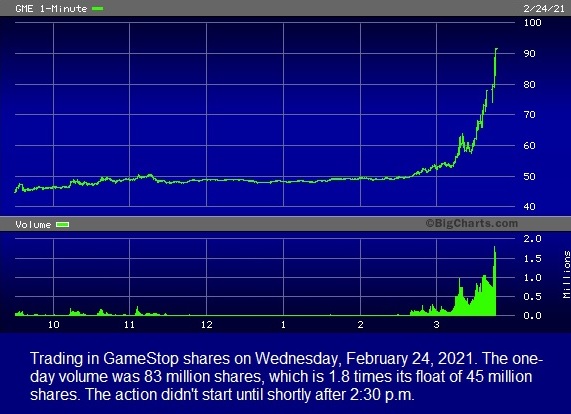 It’s not just the nation’s Capitol that saw a lawless attempted coup this year. There’s an ongoing lawless coup taking place on Wall Street among stock manipulators who seem to be sending the message to the Biden administration, “we dare you to catch us.”

We continue to write about GameStop because it stands at the intersection of everything that is corrupt and broken in U.S. markets: from payment-for-order flow, to high frequency trading, to front-running, to Dark Pools, to hedge funds masquerading as market makers and lack of an audit trail at the Securities and Exchange Commission to shed daylight on the whole corrupt mess.

Just six days after some of the major players in the wild trading action of GameStop were hauled before the House Financial Services Committee and put under oath, the stock more than doubled in price yesterday. GameStop opened at $44.70 and closed at $91.71, a one-day gain of 103.94 percent.

As the chart above shows, the big action came shortly after 2:30 p.m. in the afternoon, like someone had rung a bell to start the bull raid. Adding to the suggestion that high frequency traders felt they had nothing to fear from the SEC or Congress, Dow Jones’ MarketWatch reports that a total of 83,111,740 shares of GameStop traded yesterday, which is 1.8 times the 45 million share float of the stock. (Float is the number of outstanding shares issued by the corporation that are available to trade. It excludes such outstanding shares as those owned by corporate insiders that are restricted from trading.)

That type of volume, which occurred primarily in a 90-minute span in the afternoon, suggests the hand of high frequency traders and a coordinated manipulation in the stock.

Adding to the speciousness of the spike in the stock price, there was no positive news to justify the action yesterday. In fact, on Tuesday the company announced that its CFO, Jim Bell, was resigning. When a company’s CFO abruptly announces his departure a few business days after a Congressional Committee examines trading in the stock, it’s typically not a good sign.

Making the GameStop situation particularly notable is that this is a brick and mortar retail chain that is attempting to sell video games during a pandemic when most people prefer to shop online or simply download their games. That money is flowing into this stock strongly suggests that the capital allocation process of Wall Street is seriously misfiring.

Aswath Damodaran, a Professor of Finance at the Stern School of Business at NYU, has written extensively about the prospects for GameStop. He describes the situation as follows:

“GameStop is a familiar presence in many malls in the United States, selling computer gaming equipment and games, and it built a business model around the growth of the gaming business. That business model ran into a wall a few years ago, as online retailing and gaming pulled its mostly young customers away, causing growth to stagnate and margins to drop…

“Leading into 2020, the company was already facing headwinds, with declining store count and revenues, and lower operating margins; the company reported net losses in 2018 and 2019.

“In 2020, the company, like most other brick and mortar companies, faced an existential crisis. As the shutdown put their stores out of business, the debt and lease payments that are par for the course for any brick-and-mortar retailer threatened to push them into financial distress…

“Even if GameStop is able to more than double its revenues over the next decade, which would require growth in revenues of 15% a year for the next five years, and improve its margins to 12.5%, a supreme reach for a company that has never earned double digit margins over its lifetime, the value per share is about half the current stock price.”

At the time that Professor Damodaran wrote the above, January 29, 2021, he put a fair value of $47.14 on the stock. That was one day after GameStop had hit an intraday peak of $483, bringing its run from a share price of $18.84 on December 31, 2020 to an unprecedented gain of 2,465 percent for a struggling brick and mortar retail outlet. GameStop then plunged back to earth in the days that followed.

The nonprofit watchdog, Better Markets, summed up the prospects for GameStop as follows in written testimony it provided to the House Financial Services Committee:

“A rudimentary review of GameStop’s financial and business prospects (before the meteoric rise of the stock price) would have yielded the following unmistakable conclusions: GameStop was bleeding revenue in 2019 and 2020; it was closing stores with little to no prospects of re-opening them (even before the COVID-19 pandemic kept people away from shopping malls where many of GameStop’s stores are located); and its most basic business—that of selling and renting hard-disk video games—was under threat from the new generation video game consoles that were no longer equipped with hard-disk readers and instead required gamers to digitally download or stream the games. Yet, none of this prevented millions of investors who were hyped, misled, or manipulated into pouring their hard-earned money into GameStop and similar stocks. And none of this seems to have mattered to Robinhood (and others) who peddled, facilitated, and enabled leveraged and margin investing that some now believe has become so widespread as to have systemic risk implications.”

While our readers may have no stake in GameStock or any of the other wild-flying meme stocks, every American has a vested interest in preventing systemic risk to our markets. One only has to recall what happened in 2008 and its aftermath as millions of Americans lost their jobs, their homes and their life savings attempting to survive the worst U.S. economic crisis since the Great Depression. That economic collapse occurred because regulators were asleep at the switch as systemic risk spread from the trading houses on Wall Street to the federally-insured mega Wall Street banks, that own their own sprawling trading desks in New York, derivative trading desks in London, and Dark Pools scattered around the globe.

Systemic risk is back again because Congress and the Obama administration did not have the courage to put tough legislation in place when Democrats controlled the House, the Senate and the Executive branch in 2010. Instead of restoring the Glass-Steagall Act which had protected the U.S. financial system for 66 years until its repeal in 1999, Congress passed the wimpy Dodd-Frank financial reform legislation in 2010. (See Dodd-Frank Versus Glass-Steagall: How Do They Compare?)

It’s also likely no coincidence that this wild west trading is occurring while Gary Gensler is awaiting his confirmation hearing to take the reins as the new Chairman of the Securities and Exchange Commission. That hearing is slated to occur before the Senate Banking Committee on March 2. (See Wall Street Fears Gary Gensler Because He Knows Too Much.) Wall Street seems to be sending a message to Gensler, who was the former Chairman of the Commodity Futures Trading Commission, “you may be the new Sheriff, but we own this town.”