Wall Street Sends a Message to the Fed: We Have Run Out of Places to Stuff Your Treasuries 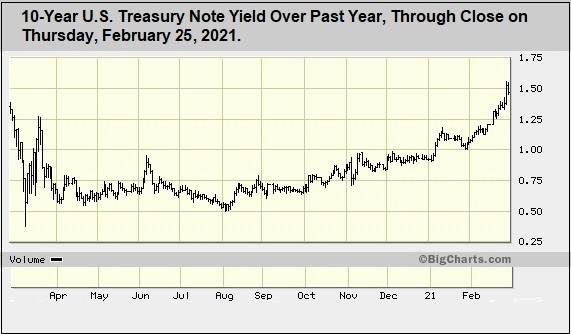 The action in the U.S. Treasury market yesterday reminded us of the classic “I Love Lucy” episode at the chocolate factory. As the conveyor belt churns out chocolate balls faster than Lucy and Ethel can handle them, they resort to stuffing them in their mouths, their hats, and their shirts. Lucy remarks: “I think we’re fighting a losing game.” (See video clip below.)

That was the scene in the Treasury market yesterday – too much supply and no where to stuff it, causing a sharp spike in yields which set off a stock market selloff that left the Dow down 559.8 points or 1.75 percent on the day, while the tech-heavy Nasdaq fared far worse, losing 478.5 points or 3.52 percent.

That the Treasury market is now projectile vomiting T-notes should come as a surprise to no one. As the chart above indicates, yields on the 10-year note have been rising sharply since early August, with the yield more than tripling from 0.50 percent to an intraday spike yesterday of 1.61 percent. The 10-year note opened this morning at 1.52 percent.

The sharp and persistent rise in yields have left those who bought the T-notes at dramatically lower yields licking their wounds from heavy losses. (Prices of notes and bonds move inversely to their yields.) That has also dramatically lessened the appetite to buy more Treasuries at the current yields when the supply is expected to continue to increase as a result of rising government deficits and stimulus spending.

Another catalyst for yesterday’s selloff in Treasuries was a very sloppy Treasury auction where the government attempted to stuff $62 billion of a 7-year Treasury note into an already over-supplied market.

The spike in yields comes despite the fact that the Federal Reserve itself has been buying $80 billion each month in various maturities of Treasury notes and bonds. That started in June of last year. As of this past Wednesday, the Fed owned $4.8 trillion of Treasury securities, part of that resulting from its purchases of Treasuries (QE programs) after the 2008 Wall Street crash.

In an additional effort to hold overall interest rates down, the Fed is also buying $40 billion each month in agency mortgage-backed securities (MBS). It owns $2.18 trillion of those, much of that also resulting from the aftermath of the 2008 crash.

Aside from the Fed, the other big domestic buyers of Treasury securities are the mega Wall Street banks. These banks are known as “Primary Dealers” and are contractually bound to have to buy at Treasury auctions. This is how the New York Fed describes the role of Primary Dealers:

“Primary dealers serve as trading counterparties of the New York Fed in its implementation of monetary policy. This role includes the obligations to: (i) participate consistently in open market operations to carry out U.S. monetary policy pursuant to the direction of the Federal Open Market Committee (FOMC); and (ii) provide the New York Fed’s trading desk with market information and analysis helpful in the formulation and implementation of monetary policy. Primary dealers are also required to participate in all auctions of U.S. government debt and to make reasonable markets for the New York Fed when it transacts on behalf of its foreign official account-holders.”

On top of the problem of a supply glut is the fact that these mega banks/Primary Dealers have been allowed to gobble up other banks over the years, leading to a dramatic decline in the number of Primary Dealers available to bid at Treasury auctions. In 1988 there were 46 primary dealers. By 1999, there were only 30. Today, there are just 24. (Click on the plus sign under “List of Primary Dealers” here to see the names.)