Wall Street Fears Gary Gensler Because He Knows Too Much 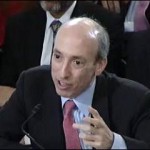 Last Tuesday, Wall Street was stewing over the Reuters report that President-Elect Joe Biden was likely to name Gary Gensler, the former Chair of the Commodity Futures Trading Commission (CFTC), as the new Chair of the Securities and Exchange Commission (SEC). The CFTC oversees the futures market. The SEC oversees the trading of stocks; the stock exchanges; the broker-dealers and investment banks that underwrite and trade stocks; and how all of these firms interact with investors. The SEC also oversees Wall Street’s dubious Dark Pools – which Wall Street On Parade has challenged as engaging in potentially illegal behavior.

By Friday, January 15, Wall Street’s banks ended in a sea of red with Citigroup losing a whopping 6.93 percent on the day. All of the mega banks posted losses far exceeding the meager 0.57 percent decline in the Dow Jones Industrial Average on Friday.

Yesterday, the Biden team confirmed Gensler’s nomination to the post.

Gensler chaired the CFTC from May 26, 2009 to January 3, 2014. Gensler had previously served as a Senior Advisor to Senator Paul Sarbanes in writing the Sarbanes-Oxley Act of 2002. That legislation imposed criminal penalties, including prison time, if CEOs and CFOs knowingly sign off on financial statements they know to be false. Wall Street has never forgiven Gensler for that. Thus, Gensler is now a Professor at MIT Sloan School of Management rather than serving in a cushy job on Wall Street.

Gensler’s Chairmanship of the SEC would bring to an end a 7-year run of Wall Street’s lawyers running the SEC, under both President Obama and President Trump. (See here and here.)

Wall Street also dislikes Gensler because he has an institutional command of the lurking risks and he likes to speak the truth before investigative bodies and to the general public.

In 2010, Gensler spoke at the Chatham House in London and explained the role of derivatives in the 2008 financial collapse on Wall Street. Gensler stated:

“OTC derivatives were at the center of the 2008 financial crisis. They added leverage to the financial system with more risk being backed up by less capital. U.S. taxpayers bailed out AIG with $180 billion when that company’s ineffectively regulated $2 trillion derivatives portfolio, managed from London and cancerously interconnected to other financial institutions, nearly brought down the financial system. As we later learned, much of the bailout money flowed through AIG to U.S. and European banks. These events demonstrate how over-the-counter derivatives – initially developed to help manage and lower risk – can actually concentrate and heighten risk in the economy and to the public.”

The Dodd-Frank financial reform legislation of 2010 was supposed to rein in derivative risks by mandating that derivatives move from being private contracts between two parties (Over-the-Counter) to central clearing. Gensler testified as follows to the House Financial Services Committee on June 19, 2012:

“Dodd-Frank financial reform shines bright lights of transparency – to the public and to regulators – on the swaps [derivatives] market for the benefit of investors, consumers, retirees and businesses in America. Transparency is critical to both lowering the risk of the financial system, as well as reducing costs to end-users. The more transparent a marketplace is to the public, the more efficient it is, the more liquid it is, and the more competitive it is.”

What Gensler is going to find out in short order is that the mega banks on Wall Street, particularly JPMorgan Chase and Citigroup, have gamed the intent of Dodd-Frank when it comes to derivatives. That market is as dark as ever before with the majority of all derivatives having failed to move to central clearing.

Gensler also knows a great deal about the accounting games used by the largest banks on Wall Street. He was called to testify before the Financial Crisis Inquiry Commission (FCIC) in 2010. That Commission looked at the underlying causes of the 2008 Wall Street crash. Gensler outlined a litany of regulatory failures, including off-balance sheet accounting tricks at the Wall Street banks and liquidity mismatches, that led to the crash. (You can listen to the audio of that interview here and see for yourself that this guy is just too smart and candid for Wall Street’s liking.)

The scariest part of Gensler’s testimony to the FCIC is that everything he described then is still going on today: derivative risks have not been reined in; Wall Street banks are still paying rating agencies for ratings; risk is still concentrated among a handful of mega banks; and dodgy off-balance sheet accounting still poses grave dangers to some of the largest banks. As for the potential for a liquidity run, we just had that in September of last year but none of the bank regulators want to provide any transparency to the American people as to exactly what happened. (See Wall Street Bank Stocks Closed in a Sea of Red Yesterday as Fed Pumps in Another $105 Billion of Liquidity and U.S. Financial System “Monitor” Failed to Flash Warning as Fed Pumped $6 Trillion Emergency Liquidity into Wall Street.)

Gensler even understands the current, looming commercial real estate crisis. He testified as follows to the FCIC in 2010:

“…on the asset side they were just fundamentally misjudging how illiquid these things were just because they put it inside of a loan. Lehman Brothers had a lot of things that they called commercial loans. If you make a $100 million loan against a building that’s worth $105 million, it is a loan. But now the building is worth $95 million a month or two later. It feels more like you own the building. So is it real estate or a loan.”

Gensler’s confirmation hearing is going to be fun to watch. There are going to be a number of Republicans on that Committee who are receiving large campaign contributions from Koch Industries, which does not want to see market regulations tightened. In addition to holding interests in oil refineries, pipelines, chemicals, and paper products, Koch Industries also owns a massive trading operation called Koch Supply and Trading.