PBS Drops Another Bombshell: Wall Street Is Gobbling Up Two-Thirds of Your 401(k) 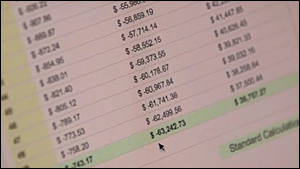 If you work for 50 years and receive the typical long-term return of 7 percent on your 401(k) plan and your fees are 2 percent, almost two-thirds of your account will go to Wall Street. This was the bombshell dropped by Frontline’s Martin Smith in this Tuesday evening’s  PBS program, The Retirement Gamble.

This is not so much a gamble as a certainty: under a 2 percent 401(k) fee structure, almost two-thirds of your working life will go toward paying obscene compensation to Wall Street; a little over one-third will benefit your family – and that’s before paying taxes on withdrawals to Uncle Sam.

To put it another way – you work for Wall Street. You are their slave, their lackey and as long as their toadies dominate in Congress, nothing is going to change on the legislative front to stop the looting. Wall Street seized millions of homes through illegal foreclosures and stripped the equity from the owners. They got away with it. Some Wall Street firms further enriched themselves making bets that the housing market would collapse, using their inside knowledge of the bogus loans they had made. They got away with that also. Now Wall Street is busy asset stripping the retirement plans of the working class in America while President Obama proposes to cut Social Security benefits through a discredited calculation called Chained CPI – conveniently causing people to save more in their 401(k) plans to make up for the potential loss. But the more you save, the more Wall Street asset strips.

The Retirement Gamble was written by the outstanding team of Martin Smith and Marcela Gaviria, who exposed in January that when it came to Wall Street, the U.S. Justice Department had “no investigations going on. There were no subpoenas, no document reviews, no wiretaps.” The head of the criminal division of the Justice Department, Lanny Breuer, announced he was stepping down one day after that program aired. He returned to Covington & Burling, the corporate law firm representing Wall Street firms.

This is the relevant portion of the transcript from the program:

Bogle: Costs are a crucial part of the equation. It doesn’t take a genius to know that the bigger the profit of the management company, the smaller the profit that investors get. The money managers always want more, and that’s natural enough in most businesses, but it’s not right for this business.

Smith: Bogle gave me an example. Assume you’re invested in a fund that is earning a gross annual return of 7 percent. They charge you a 2 percent annual fee. Over 50 years, the difference between your net of 5 percent — the red line — and what you would have made without fees — the green line — is staggering. Bogle says you’ve lost almost two thirds of what you would have had.

Bogle: What happens in the fund business is the magic of compound returns is overwhelmed by the tyranny of compounding costs. It’s a mathematical fact. There’s no getting around it. The fact that we don’t look at it— too bad for us.

Smith: What I have a hard time understanding is that 2 percent fee that I might pay to an actively managed mutual fund is going to really have a great impact on my future retirement savings.

Smith takes Bogle’s advice and pulls up a compounding calculator on his laptop. On air, he shows the viewer the results:

Presently, 70 percent of Americans who have any kind of retirement plan at their place of employment have a 401(k) plan. Not everyone is paying 2 percent fees. Some are paying more and others are paying less – sometimes much less if using passively managed index funds. But, historically, Wall Street has preyed on the least informed and the least educated, which tends to be the poor and middle class.

Consider the testimony of Gail Kubiniec, a former Assistant Manager at CitiFinancial, a unit of mega Wall Street firm Citigroup, to the Federal Trade Commission in 2001 concerning the premise on which she loaded on extra charges to loans:

“I and other employees would often determine how much insurance could be sold to a borrower based on the borrower’s occupation, race, age, and education level. If someone appeared uneducated, inarticulate, was a minority, or was particularly old or young, I would try to include all the coverages CitiFinancial offered. The more gullible the consumer appeared, the more coverages I would try to include in the loan…”

The Retirement Gamble can be viewed in its entirety here.