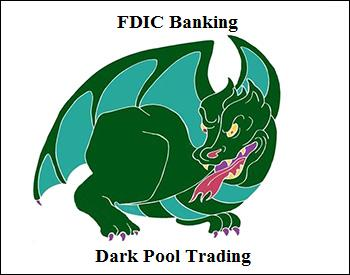 On June 2 of this year, the Financial Industry Regulatory Authority (FINRA), a self-regulator of Wall Street’s broker-dealers, dropped a bombshell. For the first time, FINRA released trading data for Wall Street’s dark pools – unregistered stock exchanges that the SEC recklessly allows to trade stocks without making the bids and offers public, along with many other details.

The bombshell, that mainstream business media has yet to comprehend, was that the same mega Wall Street banks whose share prices crashed in the 2008 financial crisis are today not only running dark pools for stock trading but they’re trading the stock of their own corporate parents – to the tune of tens of millions of shares a week. Those Wall Street banks include JPMorgan Chase, Bank of America Merrill Lynch and Citigroup.

What could possibly go wrong in this arrangement?

Two days after Franklin D. Roosevelt was sworn in as President on March 4, 1933, he declared a nationwide banking holiday lasting to March 13 to stem a mushrooming banking panic and bank runs. The spark that ignited the accelerating panic was the collapse of the Bank of United States in 1930.  At the time of its collapse, it was the fourth largest depositor bank in New York City, holding an astounding $268 million for over 400,000 small time depositors. It was the largest banking collapse in the nation’s history at that point.

The name of the bank, incorrectly suggesting it had U.S. government ties, fueled press coverage of the collapse and started other bank runs around the country.

The bank was founded by two men from the garment industry, Bernard Marcus and Saul Singer. Like the dangerous structure of today’s biggest deposit-taking banks, it had a stock trading arm, the Bankus Corp. It was through that trading unit that the bank manipulated the price of its own stock, using the money of depositors, and then used the shares as collateral for loans. Banking examiners later determined that other banks had acted similarly.

It was a clear-cut recipe for disaster that no regulator took action to preempt until, at the height of an economic collapse, Congress passed the Glass-Steagall Act on June 16, 1933, creating Federal Deposit Insurance for bank deposits while also banning banks taking insured deposits from owning stock trading houses.

That legislation protected a nation from the insatiable greed of stock speculators for almost 70 years until its repeal under the Gramm-Leach-Bliley Act on November 12, 1999 under the Clinton administration and at the behest of Citigroup and other Wall Street mega banks who sold naïve editorial boards and a gullible Congress on the benefits of the one-stop banking supermarket model.

To be perfectly clear on this point, there is absolute historical proof that banks can and will manipulate their own share prices when they are allowed to operate stock trading venues in the dark. And, there is the very recent evidence of 2012 that JPMorgan lost $6.2 billion of its depositors’ funds in a high-risk derivatives trading scheme known as the London Whale. We also know that depositor funds were being used in some kind of stock trading operation at JPMorgan but the U.S. Senate’s Permanent Subcommittee on Investigations has redacted the details.

On June 27, 2012, the editorial page editors of the New York Times finally admitted their horrifically bad call on urging the repeal of the Glass-Steagall Act, writing:

What exactly were “the results of this sweeping deregulation” to which the New York Times referred. The editorial page editors were likely thinking of the insolvency of iconic Wall Street names like Lehman Brothers and Bear Stearns and Citigroup and Merrill Lynch; the $182 billion bailout of AIG; the government takeover of Fannie Mae and Freddie Mac and so forth.

But there is one more critical detail that has received too little attention. The stock market, under the repeal of Glass-Steagall, was insanely mispricing the value of the shares of stock of Wall Street’s trading houses.

On March 17, 2008, at the very beginning of the Wall Street mega-bank unraveling, we wrote the following about the perils our nation was facing as a result of the repeal of the Glass-Steagall Act:

“If ever there was evidence that America is now facing that peril, it was the most recent news that the Bush administration’s much touted ‘free and efficient market’ had priced Bear Stearns at $30 a share at the close of trading on Friday, March 14, 2008 but on further examination of its books over the weekend, it was valued at $2 a share and absorbed by JPMorgan at that price.” (JPMorgan later raised the price to $10 but it was still two-thirds below Bearn Stearns’market price on March 14, 2008.)

Then there was the 5-day share price evaporation at Citigroup from November 17-21 of 2008. We wrote as follows at the time:

Was Citigroup allowed to fail? Was Citigroup closed by regulators? Did anyone go to jail at Citigroup as was the case at the Bank of United States? None of those things occurred. Instead, after losing 60 percent of its market value in one week, the U.S. government chipped in another $20 billion in equity into Citigroup, bringing the total to $45 billion, and then provided an asset guarantee of over $300 billion. The New York Fed did its part with over $2 trillion in below-market rate loans to Citigroup.

Which brings us to today, with a mainstream business media that has covered this epic tale of deceit and hubris and financial collapse for five long, agonizing years and yet this corporate media sees no alarm bells, no warning sirens from the fact that Citigroup and other Wall Street trading houses that control the vast majority of banking deposits in the United States are trading the shares of their own bank stocks in their own in-house, unregulated, dark pool trading venues.