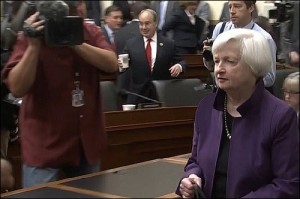 Late yesterday afternoon, while the stock market was still open, three reporters at the Wall Street Journal penned an article with this opening statement: “President-elect Joe Biden plans to nominate former Federal Reserve Chairwoman Janet Yellen, an economist at the forefront of policy-making for three decades, to become the next Treasury secretary, according to people familiar with the decision.”

Within the next half hour, every major newswire and many of the largest newspapers in the U.S. were repeating the Journal’s story.

The Journal noted that the Biden camp wasn’t expected to make a “formal announcement” of the Yellen nomination until November 30. Nonetheless, the Journal decided it had the self-anointed right to stand in for the Biden transition team and make the announcement a week ahead of time.

To induce a nice big stock market rally on the news (the Dow closed up 327.7 points) the Journal article carried this pivotal paragraph:

“Ms. Yellen is an ‘excellent choice for Treasury secretary,’ said Gary Cohn, President Trump’s former top economic adviser, in a statement. ‘Having had the opportunity to work with then-Chair Yellen, I have no doubt she will be the steady hand we need to promote an economy that works for everyone, especially during these difficult times.’ ”

By invoking Cohn’s name, the Journal was simultaneously invoking the approval of Goldman Sachs. Prior to arriving in the Trump administration, Cohn was the Co-President of Goldman Sachs who oversaw its trading business in the leadup to the 2008 crash. While Cohn sat in a top management position at Goldman, it offloaded billions of dollars of toxic subprime mortgage securities onto unwary customers, with employees even referring to one offering as a “shitty deal” in emails. Goldman was shorting (betting against) some of the pools of mortgages it was representing to its customers as a good investment and allowing John Paulson’s hedge fund to do the same after the hedge fund selected mortgages designed to fail. Billions of dollars of this rotten paper were sold to public pension funds and other institutional investors.

In April 2011, the Senate’s Permanent Subcommittee on Investigations released a 635-page report which included specifics on the deceitful and fraudulent role that Goldman Sachs played, among others, in burning down Wall Street and the U.S. economy in the greatest collapse since the Great Depression.

The Journal’s editorial and opinion pages, have, to a large degree, failed to acknowledge the corrupt role that Wall Street banks played in the last crisis or their ongoing crime spree. As we wrote in 2015, the Journal has consistently sent this message to the big Wall Street banks since they crashed the financial system and U.S. economy in 2008: “even though you caused the greatest economic collapse to your country since the Great Depression, you didn’t deserve ‘fierce regulatory scrutiny’; despite your serial crime spree since that collapse, regulators have one hell of a nerve trying to pull back the curtain on the culture you’re breeding inside your secretive, financial Petri dish; but, pay no heed to these nosy jackals, you can always count on the Wall Street Journal opinion pages to shoot the messenger and cover your jaded backsides.”

In an effort to counter the glee on Wall Street yesterday with the Yellen news, which might be interpreted by progressives that Biden was selling out to Wall Street, Elizabeth Warren Tweeted the following at 4:34 p.m. yesterday as the Yellen headlines were appearing coast-to-coast:

“Janet Yellen would be an outstanding choice for Treasury Secretary. She is smart, tough, and principled. As one of the most successful Fed Chairs ever, she has stood up to Wall Street banks, including holding Wells Fargo accountable for cheating working families.”

In truth, no federal regulator has held Wall Street banks accountable in either the Obama or Trump administrations. JPMorgan Chase just landed its 4th and 5th felony counts in six years; Goldman was just criminally charged by the Justice Department in an international bribery and kickback scandal; and Citigroup has the worst rap sheet in its century of existence.

Warren’s laudatory sentiments about Yellen yesterday were not exactly Warren’s take on July 15, 2014 when Fed Chair Yellen appeared before the Senate Banking Committee to present her semi-annual report on monetary matters. A tense exchange took place between Yellen and Warren over the so-called “living wills” for the mega banks on Wall Street. After reminding Yellen that Section 165 of Dodd-Frank mandated that the Wall Street mega banks had to submit annual, “credible” plans to the Fed explaining how they could be quickly wound down if they got into severe financial trouble, rather than asking for another taxpayer bailout, Warren noted how massive some of these banks had grown since the 2008 crash. Lehman Brothers, said Warren, had $639 billion in assets and 209 subsidiaries when it failed in 2008 and it took three years to unwind the bank in bankruptcy. As of July 2014, noted Warren, JPMorgan Chase had $2.5 trillion in assets and 3,391 subsidiaries.

Yellen told Warren that some of these living wills were “tens of thousands of pages.”

Warren responded to Yellen with this:

On December 13, 2017, Janet Yellen held her last press conference as Chair of the Fed. (President Donald Trump had nominated Jerome Powell to succeed her as Chair when her four-year term ended in February 2018.) During the press conference, CNBC’s Steve Liesman asked Yellen if there were “concerns at the Fed about current market valuations,” i.e., if the market was in bubble territory.

Yellen’s response to Liesman is troubling for someone who would, if actually nominated by Biden and confirmed by the Senate, not only serve as U.S. Treasury Secretary but would also chair the Financial Stability Oversight Council (F-SOC). (Under the Dodd-Frank financial reform legislation of 2010 which created F-SOC, the Treasury Secretary Chairs that body.) F-SOC includes every major federal regulator of banks and markets in the U.S.

Yellen said this about the bubble market:

“So let me start Steve with the stock market generally. Of course the stock market has gone up a great deal this year and we have in recent months characterized the general level of asset valuations as elevated. What that reflects is simply the assessment that looking at price-earnings ratios and comparable metrics for other assets other than equities we see ratios that are in the high end of historical ranges. And so that’s worth pointing out.

“But economists are not great at knowing what appropriate valuations are. We don’t have a terrific record. And the fact that those valuations are high doesn’t mean that they’re necessarily overvalued.

“We are in a – I’ve mentioned this in my opening statement and we’ve talked about this repeatedly – likely a low interest rate environment, lower than we’ve had in past decades. If that turns out to be the case, that’s a factor that supports higher valuations.

“We’re enjoying solid economic growth with low inflation and the risks in the global economy look more balanced than they have in many years.

“So I think what we need to, and are trying to think through, is if there were an adjustment in asset valuations in the stock market, what impact would that have on the economy and would it provoke financial stability concerns.

“And, I think when we look at other indicators of financial stability risks, there’s nothing flashing red there or possibly even orange.

“We have a much more resilient, stronger banking system and we’re not seeing worrisome buildup in leverage or credit growth at excessive levels. So, this is something that the FOMC [Federal Open Market Committee] pays attention to, but if you ask me is this a significant factor shaping monetary policy now, while it’s on the list of risks it’s not a major factor.”

Shortly after Yellen made this statement, the federal regulator of national banks, the Office of the Comptroller of the Currency (OCC), was reporting this:

Those four banks were: JPMorgan Chase with $48.55 trillion in notional (face amount) of derivatives; Citigroup with $48.5 trillion; Goldman Sachs with $41.3 trillion; and Bank of America with $18 trillion.

As of the last quarterly report from the OCC for the quarter ending June 30, 2020, the dystopian bank situation looked like this: JPMorgan Chase had increased its derivatives exposure to $52.6 trillion notional; Goldman Sachs had moved into second place with $43.3 trillion; Citigroup stood at $41.1 trillion; and Bank of America hadn’t budged much at $18.5 trillion.

This massive, concentrated exposure to derivatives at four mega Wall Street banks has been allowed to persist by both Democrat and Republican-led administrations despite the fact that derivatives played a central role in blowing up the U.S. economy in 2008.

Until Congress gets serious about restoring the Glass-Steagall Act, which would separate federally-insured, deposit-taking banks from the trading casinos on Wall Street, the financial system of the United States remains at grave risk, regardless of who sits at the helm of the regulators.