Is the Wall Street Journal Part of the Culture Problem on Wall Street? 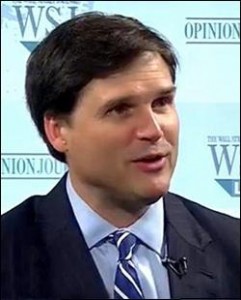 James Freeman, Assistant Editor of the Wall Street Journal Editorial Page, Previously Referred to the JPMorgan $13 Billion Settlement as a “Plunder by Washington”

Yesterday, Emily Glazer and Christina Rexrode penned an article for the Wall Street Journal on the regulatory focus that is coming to bear on the culture in the biggest Wall Street banks. (We’d link to the story did it not have a paywall blocking the contents.)

Wall Street Journal Editor in Chief Gerard Baker gave the article a plug in his column yesterday with a jab – not at the banks but at the regulators: “The banking sector, already under fierce regulatory scrutiny since the financial crisis that has resulted in tens of billions of dollars in fines, faces a new and apparently even more arbitrary intervention from the regulators. Our story looks at how the issue of ‘culture’ is taking on added urgency as U.S. banks await feedback expected around March from the Fed’s annual ‘stress tests,’ which are supposed to ensure that firms will be able to deal with another financial crisis without government assistance…” (Italic emphasis added.)

The words chosen by Baker send the following message to Wall Street: even though you caused the greatest economic collapse to your country since the Great Depression, you didn’t deserve “fierce regulatory scrutiny”; despite your serial crime spree since that collapse, regulators have one hell of a nerve trying to pull back the curtain on the culture you’re breeding inside your secretive, financial Petri dish; but, pay no heed to these nosy jackals, you can always count on the Wall Street Journal opinion pages to shoot the messenger and cover your jaded backsides.

Baker’s barbs at the regulators was in perfect symmetry with a Wall Street Journal editorial that appeared on October 20, 2013, a month before JPMorgan settled with regulators for $13 billion over its packaging of bogus mortgages which it had peddled to unwary investors. The stunning, unsigned editorial was headlined, “The Morgan Shakedown,” and accused regulators of “confiscating roughly half of a company’s annual earnings for no other reason than because they can and because they want to appease their left-wing populist allies.”

In an earlier video clip on September 25, 2013, a Wall Street Journal editorial page editor, James Freeman, calls the Department of Justice’s monetary demands on JPMorgan a “plunder by Washington.”

The inanity of these Wall Street Journal comments came into sharp perspective on November 6 of last year when Matt Taibbi revealed in the pages of Rolling Stone that the U.S. Justice Department had the best of all eyewitnesses to mortgage fraud at JPMorgan – an attorney who worked there and reported the fraud to her supervisors. The whistleblower, Alayne Fleischmann, told Taibbi that what she witnessed in JPMorgan’s mortgage operations was “massive criminal securities fraud.”

JPMorgan Chase is America’s largest bank by assets. If it is perpetuating a culture of “it’s legal if you can get away with it,” then it is formalizing a business model against which other Wall Street banks must compete. This is very likely a race to the bottom cultural phenomenon.

Nothing better crystallizes this race to the bottom on Wall Street than the “Wheel of Misfortune” created by attorneys Helen Davis Chaitman and Lance Gotthoffer to illustrate the serial nature of the crimes at JPMorgan. The Wheel crisply reveals that over the past four years, JPMorgan Chase has paid $29 billion to settle 25 different claims that it violated the law and defrauded either the public or its customers. The authors write: “These are not isolated incidents; the pattern is clear. JPMorgan Chase has a culture — like the mob — where anything goes so long as it is profitable.”

The two attorneys pinpoint crimes at JPMorgan that are as unconscionable as they are systemic: overcharging active duty military on mortgages and illegally foreclosing on their homes; billing customers for credit monitoring services that never existed; rigging California and Midwest electric markets; using bank depositor funds to make high risk gambles in exotic derivatives (London Whale), resulting in at least $6.2 billion in losses.

The race to the cultural bottom on Wall Street is further exemplified by the New York Fed, a Wall Street regulator, having the audacity to hold a conference last October styled as a “Workshop on Reforming Culture and Behavior in the Financial Services Industry.”

We wrote at the time that “What the New York Fed attempted to pull off this past Monday with its full-day conference for the execs of wayward Wall Street banks was a public relations stunt to switch the national debate from its culture to Wall Street’s culture…the event came less than a month after ProPublica and public radio’s “This American Life” released internal tape recordings made by a former New York Fed bank examiner, Carmen Segarra, revealing a regulator with no bark or bite.” Segarra, an attorney, has charged in a Federal lawsuit that when she attempted to write a bad regulatory review of Goldman Sachs she was intimidated and bullied at the New York Fed and then fired.

Wall Street already has plenty of front men – the Wall Street Journal should get back to the job of journalism in the public interest.