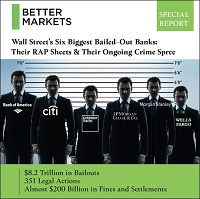 Maybe it’s because Wall Street On Parade has been shining a bright light on the serial crimes and rap sheets of Citigroup and JPMorgan Chase. Or maybe it’s because the nonpartisan watchdog, Better Markets, published a report last year titled “Wall Street’s Six Biggest Bailed-Out Banks: Their RAP Sheets & Their Ongoing Crime Spree.” Or maybe it all comes down to what Senator Dick Durbin of Illinois said after the financial crisis of 2008: “And the banks – hard to believe in a time when we’re facing a banking crisis that many of the banks created – are still the most powerful lobby on Capitol Hill. And they frankly own the place.”

Whatever the reason, the darkness that started growing around the crimes committed by the big Wall Street banks during the Obama administration has now evolved into such a complete dark curtain that regulators are refusing to say what the crimes actually are that are being settled for huge amounts of money.

On October 7, the Federal Reserve and Office of the Comptroller of the Currency (OCC) announced consent decrees with Citigroup, the third largest bank in the country. The OCC imposed a $400 million fine on Citigroup’s federally-insured commercial bank, Citibank, and stated in its Consent Order that it had “identified unsafe or unsound practices with respect to the Bank’s internal controls, including, among other things, an absence of clearly defined roles and responsibilities and noncompliance with multiple laws and regulations.”

But for the first time in more than 35 years of our reading these Consent Orders against Wall Street banks, the documents from both the OCC and Federal Reserve failed to specify exactly what crimes the bank had committed. We were so stunned by a $400 million fine for crimes that can’t be put in print or shared with the public, that we penned the headline: Citigroup Is Slapped with a $400 Million Fine for Doing Something So Bad It Can’t Be Spoken Out Loud.

Yesterday, as further proof that this is a pattern coming out of the Trump administration, the OCC did the exact same thing with JPMorgan Chase, the largest bank in the country which on September 29 admitted to its fourth and fifth criminal felony charges brought by the U.S. Department of Justice in the past six years.

Yesterday, the OCC fined JPMorgan Chase $250 million without detailing any specific crimes it had committed. The Consent Order simply said the bank had, for several years, “maintained a weak management and control framework for its fiduciary activities and had an insufficient audit program for, and inadequate internal controls over, those activities. Among other things, the Bank had deficient risk management practices and an insufficient framework for avoiding conflicts of interest.”

A Wall Street bank like JPMorgan Chase that has brazenly committed five felonies for very specific crimes, doesn’t get fined $250 million for non-specific crimes. Something very bad has once again happened at JPMorgan Chase and its federal regulators who are all rushing to get new jobs on Wall Street, or at Wall Street’s outside law firms, don’t want to talk about it.

That’s inexcusable behavior and leaves the public in the dark as to whether what JPMorgan was doing might impact their own accounts at the bank. It also destroys public confidence in the regulators and the Wall Street banks.

Consider what these so-called federal regulators are now doing compared with what the Senate’s Permanent Subcommittee on Investigations did in 2013 when it investigated JPMorgan Chase for using billions of dollars of depositors’ money to gamble in derivatives in London and lose $6.2 billion. The Senate Subcommittee was then under the Chairmanship of Democrat Carl Levin. It released 129 pages of internal mails and documents from JPMorgan Chase and delivered to the public a 300-page report with the intricate details of the banks’ abuses, naming lots of names.

What the exhibits and Senate report clearly revealed was that as of the close of business on January 16, 2012, JPMorgan’s Chief Investment Office had used depositors’ money to purchase $458 billion notional (face amount) in domestic and foreign credit default swap indices. Of that amount, $115 billion was in an index of corporations with junk bond ratings, which the bank was not allowed to own. To get around that, according to the Office of the Comptroller of the Currency, JPMorgan “transferred the market risk of these positions into a subsidiary of an Edge Act corporation, which took most of the losses.” An Edge Act corporation refers to the ability of a bank to obtain a special charter from the Federal Reserve. By establishing an Edge Act corporation, U.S. banks are able to engage in investments not available under standard banking laws. Not a very comforting thought for a 5-count felon.

By the end of the first quarter of 2012, JPMorgan had a net long position in credit default swaps – meaning that it was obligated to pay counterparties if corporations in the credit default swap indices defaulted on their debt or filed for bankruptcy. This is what collapsed the giant insurer, AIG, requiring a $182 billion bailout by the U.S. taxpayer in 2008.

Senator John McCain was the ranking member of the Senate Subcommittee at that time and this is what he said about the conduct of JPMorgan Chase:

JPMorgan Chase has a long history of “wildly risky behavior” and wears its five felony counts like notches on a gunslinger’s belt.

Mainstream business media needs to pull its head out of the sand and demand specific details from the OCC as to precisely what violations of law gave rise to the $400 million fine at Citigroup and the $250 million fine at JPMorgan Chase.