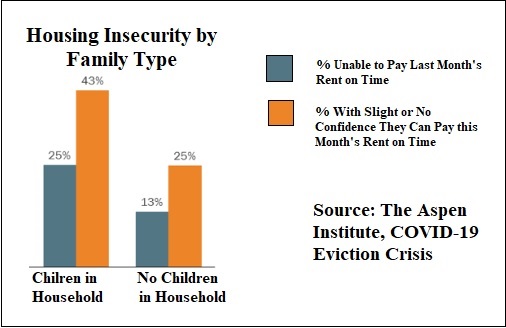 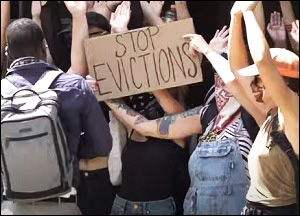 Happy New Year – here’s your eviction notice. That’s how tens of millions of struggling Americans have been set up to fail as the one percent on Wall Street, propped up by unlimited money from the Fed, ring in the New Year with Tiffany flutes of Dom Perignon in their Greenwich mansions.

According to a recent study published by The Aspen Institute, 30 to 40 million Americans will be at risk of eviction over the next several months.

The Centers for Disease Control and Prevention (CDC) has been dragged into the eviction morass because Democrats and Republicans in Congress cannot find common ground on a meaningful plan.

On Tuesday, the CDC issued an order that bans landlords from evicting tenants that cannot afford to pay rent due to a pandemic-related job loss or income reduction. The CDC action follows an executive action from President Donald Trump on August 8 that ordered the CDC to study the eviction issue.

To gain relief, renters have to sign a government designed form attesting that their plight is related to the pandemic; that they would be homeless or forced into crowded living facilities if evicted; that they “have used best efforts to obtain all available government assistance for rent or housing”; and that they “understand that at the end of this temporary halt on evictions on December 31, 2020, my housing provider may require payment in full for all payments not made prior to and during the temporary halt and failure to pay may make me subject to eviction pursuant to state and local laws.”

The plan has a multitude of defects, including the following:

(2) It provides no monetary assistance to help the renter pay the piling up rent on December 31 – effectively guaranteeing eviction at the start of the year in millions of cases.

(3) It provides no assistance to the small landlord who may be facing foreclosure because he can’t pay his own mortgage on the building. According to a recent study published by The Aspen Institute “mom and pop landlords own 22.7 million out of 48.5 million rental units in the housing market, more than half (58%) do not have access to any lines of credit that might help them in an emergency.”

(4) It provides no help to out-of-work homeowners who are facing foreclosure. On June 29, the Democrat-controlled House of Representatives passed the Emergency Housing Protections and Relief Act of 2020 that provides $100 billion for emergency rental assistance programs and a $75 billion relief fund for homeowners. The Republican-controlled Senate has refused to pass the legislation.

(5) It does nothing to stop landlords from evicting tenants (who can’t afford a lawyer to challenge the eviction) on dubious charges of loud noise, damage to the premises, or other potentially false claims.

The CDC’s plan for struggling Americans falls strikingly short of the Federal Reserve’s instant outpouring of monetary support for Wall Street for the second time in 12 years. In the first iteration, which lasted from December 2007 to July 2010, the Fed pumped $29 trillion cumulatively in revolving loans at below-market rates to prop up insolvent or teetering banks and trading houses on Wall Street. The crisis was of Wall Street’s own making by creating toxic derivatives and subprime mortgage products.

The $29 trillion in Fed loans were made without the approval, or even awareness, of Congress. Senator Bernie Sanders was able to tack an amendment to the Dodd-Frank financial reform legislation of 2010 to get a Government Accountability Office (GAO) audit of the Fed’s bailout programs. When that audit was released on July 21, 2011, it revealed that in just one of the many Fed bailout programs, the Primary Dealer Credit Facility (PDCF), the insolvent Citigroup had received $1.756 trillion in cumulative loans or 23.8 percent of the total loaned in that program. Morgan Stanley had received $1.364 trillion or 18.5 percent of the total; and Merrill Lynch, a large retail brokerage firm and investment bank, had received $1.28 trillion or 17.3 percent of the total. (See page 216 of the GAO audit here.)

That aid to Wall Street came as millions of Americans saw their homes foreclosed on by the same banks receiving the handouts from the Fed. (See Financial Crash Analysis: $22.6 Billion in Homeowner Relief; $7.8 Trillion to Four Wall Street Banks.)

When Sanders saw the shocking revelations from the GAO audit of the Fed’s lifeline to Wall Street, he said this: “This is a clear case of socialism for the rich, and rugged, you’re-on-your-own individualism for everyone else.” That’s obviously the same game plan today.

Beginning on September 17, 2019, the Fed began a replay of the 2007 to 2010 bailout of Wall Street. September 17 was, notably, three months before the first case of COVID-19 emerged anywhere in the world.

September 17, 2019 marked the beginning of yet another self-inflicted financial crisis on Wall Street. Sparked by a liquidity crisis in the overnight lending market (repo loans) interest rates spiked from 2 percent to 10 percent. The Fed jumped in with both feet to force rates back down. The Fed’s own minutes reveal that it was providing “roughly $215 billion per day” to the trading houses on Wall Street. (See Federal Reserve Admits It Pumped More than $6 Trillion to Wall Street in Recent Six Week Period.)

Once the pandemic entered the picture, the Fed opened its money spigot to Wall Street even wider, setting up 11 additional bailout programs. (See Citigroup Has Made a Sap of the Fed: It’s Borrowing at 0.35 % from the Fed While Charging Struggling Consumers 27.4 % on Credit Cards and The Fed Hasn’t Spent a Dime Yet for Main Street Versus $735 Billion for Wall Street and Congress Sets Up Taxpayers to Eat $454 Billion of Wall Street’s Losses. Where Is the Outrage?)

Despite the worst potential eviction crisis facing Americans since the Great Depression, the only comprehensive analysis of the problem that we have seen has not come from the Trump administration but from outside scholars. Following are just some of the critical findings of the in-depth study on “The COVID-19 Eviction Crisis” published at The Aspen Institute:

“Before the pandemic, eviction occurred frequently across the country. The Eviction Lab at Princeton University estimates that between 2000 and 2016, 61 million eviction cases were filed in the US, an average of 3.6 million evictions annually…

“Between March and July, unemployment rates fluctuated between 11.1% and 14.4%. By comparison, unemployment peaked at 10.7% during the Great Recession. More than 20 million renters live in households that have suffered COVID-19-related job loss. This job loss is exacerbated by the recent expiration of pandemic unemployment insurance benefits across the country…

“Renters experiencing cash shortages are increasingly relying on sources other than income to pay rent. Thirty percent of renters report using money from government aid or assistance to pay rent, and another 30% indicate that they have borrowed cash or obtained a loan to make rental payments…

“Tenants are increasingly using credit cards to pay the rent, with a 31% increase between March and April, an additional 20% increase from April to May, and a 43% increase in the first two quarters as compared to the prior year…

“There is increasing evidence that families are shifting their budget towards rent. Food pantry requests have increased by as much as 2000% in some states, with nearly 30 million Americans reporting they do not have enough food…

“In the first month of the pandemic, the federal government instituted a limited moratorium on evictions in federally-assisted housing and for properties with federally backed mortgages. The federal eviction moratorium protected about 30% of renters. Various actors in forty-three states and the District of Columbia issued eviction moratoriums that varied in level of protection and stage of eviction stopped. Those state-level protections ranged from a few weeks to a few months in duration and did not apply to all evictions. The Eviction Lab’s Eviction Tracker System indicates that eviction moratoriums were effective in reducing eviction filings when they were in place. Federal protections expired on July 24th. As of July 31st, 30 states lack state-level protections against eviction during the pandemic…

“In an updated analysis of the US Census Bureau’s Pulse Survey, based on renter’s perceptions of their ability to pay, the Aspen Institute Financial Security Program and the COVID-19 Eviction Defense Project currently estimate that 29 million renters in 12.6 million households may be at risk of eviction by the end of 2020. Stout anticipates that up to 40 million people in more than 17 million households may be at risk of eviction through the end of the year when considering a portion of survey respondents who have a ‘moderate’ degree of confidence in the ability to pay rent (in addition to those with slight or no confidence)…

“The most comprehensive policy proposals include a nationwide moratorium on evictions and at least $100 billion in emergency rental assistance. Combining this assistance with an extension of federally enhanced unemployment insurance for displaced workers would provide additional relief for renters. Responses like these could neutralize the eviction risk outlined in this report, eliminating the public and private costs of mass evictions that result from the pandemic. More importantly, they could prevent millions of people in America from experiencing unfathomable hardship in the months and years ahead. These solutions have passed the US House of Representatives two times, and have companion legislation in the Senate.”