Ghosts of the Dot.Com Bust in Yesterday’s Tech Rout 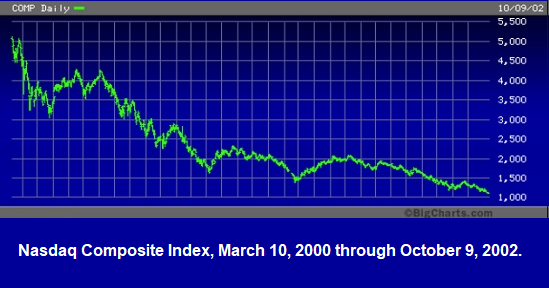 There were ghosts of the dot.com bust of 2000 to 2002 on every trading screen yesterday.

The Nasdaq composite index fell 4.96 percent to close at 11,458.10 but the carnage in many of the underlying stocks was far worse. Notably, 50 stocks in the tech-heavy Nasdaq dropped 9 percent or more yesterday, including some of this year’s highfliers.

One of those highfliers was Zoom Video Communications (ZM). Zoom closed on the first day of trading this year at $68.72; flew to $457 by September 1; lost 9.97 percent yesterday to close at $381.32 – still showing more than a quintupling of its market value in a span of eight months. That stock has a nose-bleed-worthy price-to-earnings ratio of 474.

While much of the focus has been on the bubble in the big tech names like Alphabet (parent of Google), Amazon, Apple, Facebook, Microsoft, and Netflix, dozens of smaller companies have been spiking higher this year while their prospects for sustainable earnings growth are dubious at best: The same overriding characteristic of the dot.com bust.

This is probably a good time to remind all of those young, starry-eyed Robinhood day traders that air pockets like yesterday are often a harbinger of things to come.

One year into the crash, New York Times reporter Ron Chernow described the devastation like this on March 15, 2001:

Not to put too fine a point on it, but we’re looking at a lot of empty runways today – both literally and figuratively.

The Nasdaq was so discredited that it did not reset its March 2000 high until 15 years later. In fact, it remained 50 percent or more below that high until 2007.

The Robinhoodies are likely too young to remember that it was a pack of crooked analysts on Wall Street that were the wind beneath the Nasdaq’s wings.

These analysts were effectively pimps pushing out lemon companies as hot IPOs while calling the companies dogs and crap in internal emails. The analysts and their bosses got rich from bonuses while investors were left with a portfolio of bankrupt companies.

On April 28, 2003, the Securities and Exchange Commission settled its cases against the corrupt research practices with 10 Wall Street banks for $875 million. Think about that for a moment: investors lost more than $4 trillion but Wall Street got off with a payment of $875 million. No one went to jail. Just two individual analysts were charged: Jack Grubman of Citigroup’s former Salomon Smith Barney unit and Merrill Lynch’s Henry Blodget. Both men were barred from future affiliation with a broker-dealer and paid fines that were a fraction of the bonuses they had collected.

The same Wall Street banks that settled with the SEC in 2003 have continued to be allowed to issue research reports on companies for whom they underwrite stock and debt offerings. In addition, they are allowed by the SEC to trade these same stocks in Dark Pools, which are, effectively, unregulated stock exchanges that reside inside the banks. Among the banks that were fined in 2003 by the SEC and are operating Dark Pools today are: JPMorgan, Goldman Sachs, Citigroup, Morgan Stanley and Merrill Lynch.

All of which is to caution Robinhoodies that what you don’t know about the history of the stock market and Wall Street can, indeed, hurt you.

Investors Have Stampeded Out of Stock Funds for Two Weeks – So How Did the Stock Market Set a New High Every Day Last Week?