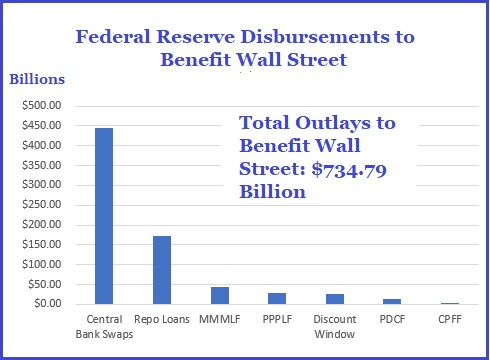 The stimulus bill known as the CARES Act (Coronavirus Aid, Relief, and Economic Security Act) was signed into law by President Donald Trump on March 27. Among its many features (such as direct checks to struggling Americans and enhancing unemployment compensation by $600 per week for four months to unemployed workers so they could pay their rent and buy food) the bill also carved out a dubious $454 billion (or 25 percent of the total $1.8 trillion spending package) for the U.S. Treasury to hand over to the Federal Reserve. This was the Faustian Bargain the Democrats had to agree to in order to get the deal approved by the Wall Street cronies in the Senate.

White House Economic Advisor Larry Kudlow, U.S. Treasury Secretary Steve Mnuchin, and Federal Reserve Chairman Jerome Powell had cooked up a scheme where the $454 billion would be handed over to the Fed, then split up into chunks, placed into Special Purpose Vehicles (SPVs) and then leveraged up by as much as 10 to 1 to provide bailouts to Wall Street. The $454 billion is being designated by the Fed as “loss absorbing capital,” meaning that taxpayers will eat the first $454 billion in losses on these Wall Street bailout programs.

Here’s where $215 billion out of the total $454 billion has thus far been earmarked by the Fed for its Wall Street bailout programs:

$25 billion has been earmarked to create this $250 billion program to buy up corporate bonds in the secondary market along with Exchange Traded Funds (ETFs). Both investment grade and junk-rated bonds and ETFs will be purchased. (See the Term Sheet here.)

$10 billion is earmarked for TALF which will leverage itself up to a $100 billion program that will provide loans against collateral composed of asset-backed securities. (See the Term Sheet here.)

$10 billion is earmarked for this Fed program. We could not find any statement on the ultimate size of this program. (See Term Sheet here.) The program is described by the Fed as providing “a liquidity backstop to U.S. issuers of commercial paper through a dedicated funding vehicle that will purchase eligible three-month unsecured and asset-backed commercial paper from eligible issuers using financing provided by the Federal Reserve Bank of New York.”

$10 billion has been earmarked to bailing out money market funds with bad paper that can’t be rolled over. (See Term Sheet here.)

$75 billion has been earmarked to fund a Fed facility of $600 billion that is preposterously being called the Main Street Lending Program. (See Term Sheet here.) The program will make loans to businesses that have up to 15,000 employees and 2019 revenues of $5 billion or less. If that doesn’t sound like a business you would find on your hometown’s Main Street, see our article: JPMorgan, Wells Fargo, Citigroup and Fossil Fuel Industry Get Bailed Out Under Fed’s “Main Street” Lending Program.

$35 billion of taxpayers’ money will fund a $500 billion Fed facility to make loans to states and municipalities that are experiencing cash flow stress as a result of the coronavirus pandemic. (See Term Sheet here.) This will help Wall Street banks by preventing them from having to write down, or take loan loss reserves against, loans they have made to these states and municipalities.

According to the Fed’s H.4.1 report dated May 6, the Primary and Secondary Market Corporate Credit Facilities were not yet operational (although buying of Exchange Traded Funds began yesterday under the Secondary Market Corporate Credit Facility). Also not yet operational as of May 6 were the TALF, Main Street Lending Program and Municipal Liquidity Facility.

But in addition to the Wall Street bailout programs set up by the Fed using taxpayers’ money to eat the first losses, the Fed is also running an alphabet soup of other programs which are not using taxpayers’ money (raising the suspicion that it’s only demanding taxpayer money where it knows it’s going to experience losses). For these other programs, the Fed is strictly using money the Fed has created out of thin air. Amounts outstanding as of May 6 are as follows in these programs:

Primary Dealer Credit Facility (loans at ¼ of one percent to the trading houses on Wall Street (a/k/a primary dealers): $14.9 billion.

We capture amounts outstanding as of May 6 at all Fed programs that were operational in the chart above, which includes those using taxpayers’ money plus Fed money and those using just Fed monies.