Congress Sets Up Taxpayers to Eat $454 Billion of Wall Street’s Losses. Where Is the Outrage? 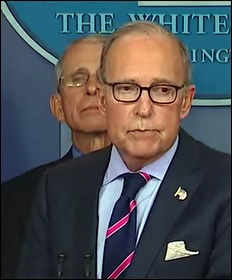 Beginning on March 24 of this year, Larry Kudlow, the White House Economic Advisor, began to roll out the most deviously designed bailout of Wall Street in the history of America. After the Federal Reserve’s secret $29 trillion bailout of Wall Street from 2007 to 2010, and the exposure of that by a government audit and in-depth report by the Levy Economics Institute in 2011, Kudlow was going to have to come up with a brilliant strategy to sell another multi-trillion-dollar Wall Street bailout to the American people.

The scheme was brilliant (in an evil genius sort of way) and audacious in employing an Orwellian form of reverse-speak. The plan to bail out Wall Street would be sold to the American people as a rescue of “Main Street.” It was critical, however, that all of the officials speaking to the media repeat the words “Main Street” over and over.

It was decided that Larry Kudlow would first announce the plan at the White House press briefing on March 24 followed by an unprecedented appearance of Fed Chairman Jerome Powell on the Today show on March 26.

This is how Kudlow explained the program that was going to be tucked into the stimulus legislation known as the CARES Act at the White House press briefing on March 24:

Kudlow: “This package will be the single largest Main Street assistance program in the history of the United States. Phase Two delivered the sick leave for individuals, hourly workers, families and so forth. Phase Three – a significant package for small businesses, loan guarantees will be included. We’re gonna take out expenses and lost revenues…And, finally, I want to mention the Treasury’s Exchange Stabilization Fund. That will be replenished. It’s important because that Fund opens the door for Federal Reserve firepower to deal in a broad-based way throughout the economy for distressed industries, for small businesses, for financial turbulence. You’ve already seen the Fed take action. They intend to take more action. And in order to get this we have to replenish the Treasury’s emergency fund. It’s very, very important. Not everybody understands that…

“So, the total package here comes to roughly $6 trillion: $2 trillion direct assistance, roughly $4 trillion in Federal Reserve lending power. Again, it will be the largest Main Street financial package in the history of the United States. Liquidity and cash for families, small business, individuals, unemployed, to keep this thing going. We’re heading for a rough period but it’s only gonna be weeks we think. Weeks, months. It’s not gonna be years, that’s for sure.”

In fact, when the dust settled, the bailout of Wall Street was structured to run 4 to 5 years while the extra $600 a week added to unemployment claims for workers was going to last four months.

To further prepare the public in case mainstream media caught on to what was really going on and pushed back, Fed Chairman Powell made an unprecedented appearance on the Today show on March 26 and explained the plan like this:

The Fed was created in 1913 under the Federal Reserve Act. There is nothing, whatsoever, in the 107-year history of the Fed that states or even suggests that it can lever up taxpayer money by 10 to 1 to bail out Wall Street and stick the taxpayer with the losses. This was an outrageous plan hatched out of thin air by Kudlow, Powell and U.S. Treasury Secretary Steve Mnuchin with zero regard for the legality of the plan.

When the text of the final CARES Act stimulus bill was released to the public, it allotted $454 billion to be handed over to the Fed from the U.S. Treasury. That $454 billion from the taxpayer would absorb the first $454 billion of losses of the Fed’s levered up $4.54 trillion rescue fund for Wall Street, which would include bailing out bad loans at the biggest Wall Street banks, the primary dealers (trading houses), commercial paper market, money market funds, corporate bonds, junk bonds, and Exchange Traded Funds (ETFs).

To underscore that secrecy on the part of the Fed might have to be invoked, Section 4009 of the CARES Act suspends the Freedom of Information Act for the Fed and allows it to conduct its meetings in secret until the President says the coronavirus national emergency is over.

In addition to pushing the narrative that this is all about a rescue of Main Street, not Wall Street, there is the Trump administration’s secondary narrative that everything was just fine with the economy and Wall Street before the coronavirus hit the U.S. At Kudlow’s March 24 press briefing, he also said this: “We started the year very strong and then we got hit by the coronavirus.” That is also a false narrative.

According to the New England Journal of Medicine, the first confirmed case of coronavirus was reported in the United States on January 20, 2020. But according to the Fed’s own minutes, between September 17, 2019 and December 10-11, 2019, the Fed had already funneled ‘roughly $215 billion per day’ in emergency loans to Wall Street’s trading houses or more than $6.23 trillion in cumulative loans.

Stress on Wall Street was also apparent by the tens of thousands of people getting fired from their jobs by major Wall Street firms. See Wall Street Had Cut 68,000 Jobs and Received Trillions in Emergency Loans Prior to COVID-19 Anywhere in the World.

So where is the outrage from all of those Pulitzer prize winning newspapers across America over the second massive Wall Street bailout in 12 years? Their silence is deafening.