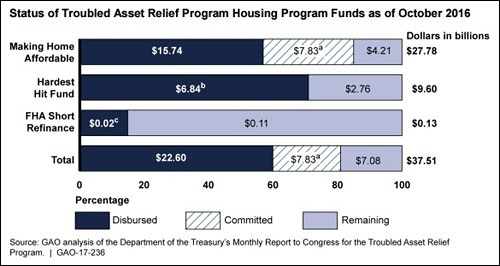 As Goldman Sachs guys prepare to take the reins of power in Washington under the Trump administration, the Government Accountability Office (GAO) provided a tragic reminder on Monday regarding the power of the U.S. citizen versus their Wall Street overlords. The GAO released a study showing that as of October 31, 2016, the government “had disbursed $22.6 billion (60 percent) of the $37.51 billion Troubled Asset Relief Program (TARP) funds” that were directed at helping distressed homeowners as a result of the 2008 Wall Street financial crash and the resulting housing bust.

Those paltry billions stand in stark contrast to the $7.8 trillion in near-zero interest loans that the Federal Reserve secretly funneled to just four Wall Street banks from 2007 to 2010. The Fed funneled $2.5 trillion to Citigroup; $2 trillion to Morgan Stanley; $1.9 trillion to Merrill Lynch; and $1.3 trillion to Bank of America. The total amount that the Fed secretly loaned to both U.S. and foreign banks came to $16.1 trillion. (See the chart below from the 2011 GAO report for the full list of bailed out banks.)

The American people would still be in the dark about the Federal Reserve’s covert money spigot to the banks except for Senator Bernie Sanders. In 2010, as Congress was debating the Dodd-Frank financial reform legislation, Sanders introduced an amendment that would force the GAO to conduct a one-time audit of the Fed covering its emergency lending programs from December 1, 2007 through July 21, 2010, the date the legislation was signed into law by President Obama. (Because of this abbreviated period of time, the public may still lack full details about Wall Street’s bailout. Sanders got pushback from the White House that prevented him from pushing for a stronger amendment.)

When the one-time audit of the Fed was released by the GAO in 2011, Sanders said in a statement: “This is a clear case of socialism for the rich and rugged, you’re-on-your-own individualism for everyone else.”

Today, Goldman Sachs is the most politically-connected Wall Street bank in America thanks to appointments by Donald Trump. But back in 2008 when the Fed was pumping out trillions of dollars to banks like penny candy at a carnival, it was Citigroup that held the reins of power. (The full extent of that power was underscored last year when WikiLeaks released emails showing that one of Citigroup’s executives, Michael Froman, has played the key role in selecting cabinet officials for Obama’s administration.) The current U.S. Treasury Secretary, Jack Lew, is a former Citigroup executive as is Stanley Fischer, the Vice Chair of the Federal Reserve. Michael Froman is the current U.S. Trade Representative who’s responsible for the deeply flawed Trans-Pacific Partnership (TPP). Obama’s Secretary of State, Hillary Clinton, ranked Citigroup as one of her top lifetime political donors.

Back in 2014, when Citigroup pushed through a legislative amendment that effectively repealed the Dodd-Frank rule that derivatives had to be removed from the books of the deposit-taking banks, Senator Elizabeth Warren spoke from the Senate floor about the corrosive power of Citigroup in Washington. Warren stated:

“Another recent Chairman of the Office of Management of Budget and Management is also a Citi alum — but I’m double counting here because now he’s the Secretary of the Treasury.”

Commensurate with its power in Washington, the serially-charged, now felony-bank Citigroup, received by far the largest bank bailout during the crash and in U.S. history. The U.S. Treasury infused $45 billion in capital into Citigroup to prevent its total collapse; the government guaranteed over $300 billion of Citigroup’s assets; the Federal Deposit Insurance Corporation (FDIC) guaranteed $5.75 billion of its senior unsecured debt and $26 billion of its commercial paper and interbank deposits; the Fed secretly sluiced $2.5 trillion in almost zero-interest loans to Citigroup. And, that’s just what the public is allowed to know about.

The meager amount that was directed to help struggling homeowners who were tricked into mortgages they couldn’t afford or who had lost their jobs because of the Wall Street bust, is, sadly, not the worst part of the story.

Neil Barofsky was the Special Inspector General of the Troubled Asset Relief Program during the financial crisis. His job was to monitor how the taxpayers’ dollars were spent. In 2012, Barofsky released his book on that period: Bailout: An Inside Account of How Washington Abandoned Main Street While Rescuing Wall Street.

One of the housing programs discussed in Monday’s report from the GAO is the Home Affordable Modification Program (HAMP). Barofsky also discussed HAMP in his book, revealing that its real goal, according to U.S. Treasury Secretary Tim Geithner, was to “foam the runway” for the banks.  Barofsky wrote:

Today, the largest Wall Street banks hold more dangerous levels of derivatives than they did at the time of the crash in 2008. Two of the banks, Citigroup and JPMorgan Chase, are now admitted felons – something that has not previously occurred in their century old existence. The Dodd-Frank reform legislation has failed to rein in the serial frauds at the banks, which have now morphed into coordinated cartel activity. And, despite all of this, President-elect Donald Trump has placed the future of the nation in the hands of Goldman Sachs power players.