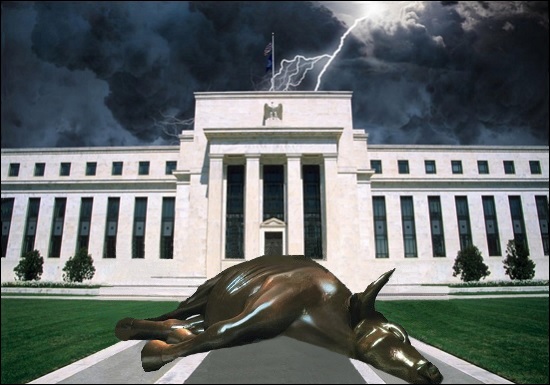 The Federal Reserve will release the results of its stress tests on the biggest and most dangerous banks at 4:30 p.m. today. But the potential results of those tests played a negative role in the stock market’s performance yesterday.

The Dow’s drop of 710 points yesterday can be ascribed to two things: the alarming news reports that COVID-19 cases are skyrocketing in the second and third most populous states in the U.S. – Texas and Florida; and a bombshell report from Bloomberg News released at 7:00 a.m. yesterday morning.

The Bloomberg article, by Lisa Lee and Shahien Nasiripour, cast the Federal Reserve in an unfavorable light over its failure to halt dividend payments at the biggest Wall Street banks, something that European bank regulators have done during the pandemic crisis. Eight of the largest U.S. banks announced in unison on Sunday, March 15, that they would halt share buybacks through the first and second quarter, but they’ve continued to pay cash dividends to shareholders, whittling away critical capital that could serve the struggling U.S. economy far better as loans to consumers and businesses. (Two-thirds of U.S. GDP consists of consumer spending.)

The Bloomberg article dropped this bombshell nugget on what Bank of America, Citigroup, JPMorgan Chase and Wells Fargo had spent on share buybacks and dividends since 2017:

We need to pause right there for a moment because both Fed Chairman Jerome Powell and the Fed’s Vice Chairman for Supervision Randal Quarles have been telling Congress and the public for months now that these mega banks, which it is in charge of supervising, have “adequate capital” and are a “source of strength” in this crisis. There is no accounting alchemy in the world that can make Citigroup a source of strength if it’s been paying out twice as much money as it’s been earning for 3-1/4 years.

In addition, the Fed appears to have been ignoring the looming risks hiding off these bank balance sheets. See our report: Three of the Biggest Banks on Wall Street Have $7.4 Trillion In Off-Balance Sheet Exposures.

It appears that the Fed has been doing the exact same thing it did during the financial crisis of 2007 to 2010 – hiding the truth from the American people while it makes trillions of dollars in secret loans to the largest Wall Street financial institutions.

Sheila Bair was the head of the Federal Deposit Insurance Corporation (FDIC) during the last financial crisis. In 2012 she released a book on the crisis titled Bull by the Horns. Bair indicates in the book her belief that Citigroup’s two main regulators, John Dugan (a former bank lobbyist) at the Office of the Comptroller of the Currency (OCC) and Tim Geithner, then President of the New York Fed who was rewarded with a plum assignment as U.S. Treasury Secretary under Obama, were covering up Citigroup’s real condition in 2008. Bair writes the following:

“By November, the supposedly solvent Citi was back on the ropes, in need of another government handout. The market didn’t buy the OCC’s and NY Fed’s strategy of making it look as though Citi was as healthy as the other commercial banks. Citi had not had a profitable quarter since the second quarter of 2007. Its losses were not attributable to uncontrollable ‘market conditions’; they were attributable to weak management, high levels of leverage, and excessive risk taking. It had major losses driven by their exposures to a virtual hit list of high-risk lending; subprime mortgages, ‘Alt-A’ mortgages, ‘designer’ credit cards, leveraged loans, and poorly underwritten commercial real estate. It had loaded up on exotic CDOs and auction-rate securities. It was taking losses on credit default swaps entered into with weak counterparties, and it had relied on unstable volatile funding – a lot of short-term loans and foreign deposits. If you wanted to make a definitive list of all the bad practices that had led to the crisis, all you had to do was look at Citi’s financial strategies…What’s more, virtually no meaningful supervisory measures had been taken against the bank by either the OCC or the NY Fed…Instead, the OCC and the NY Fed stood by as that sick bank continued to pay major dividends and pretended that it was healthy.”

Who is in charge of the trillions of dollars secretly flowing into the Wall Street banks and their trading units today? The same New York Fed that bailed out Wall Street banks to the tune of $29 trillion in cumulative loans during the last financial crisis. According to an audit conducted by the Government Accountability Office, Citigroup got more than $2.5 trillion cumulatively of those secret Fed loans. It was insolvent for much of that time.

And just who is the New York Fed? It’s one of the 12 regional Federal Reserve Banks but it’s privately owned by multinational corporations, including JPMorgan Chase, Citigroup, Goldman Sachs, and Morgan Stanley, whose executives rotate on and off its Board of Directors. Adding to the insanity of this structure, the New York Fed is the supervisor of these same bank holding companies and it can also create trillions of dollars at the push of an electronic button to make emergency loans to bail out these banks when its supervision proves to have been a dud.

The icing on the cake of this Faustian bargain is that the New York Fed contracts out the operations of its bailout programs to the very banks taking money from the bailouts. You can’t make this stuff up.

A curious quirk of the Fed’s announcement at 4:30 p.m. today is that it has asked the banks involved to muzzle themselves about whether they are going to cut or suspend their dividends as a result of the stress tests until after markets close next Monday. To mainstream that odd request, Vice Chair Quarles slipped it into a footnote of a carefully watched speech he delivered on June 19 in Washington, D.C.

The peculiar footnote read as follows:

“In order to give all banks subject to this year’s exercise sufficient time to understand their stress test results and make any necessary changes to their capital plans, we expect banks to wait until after U.S. markets close on June 29, 2020, to publicly disclose any information about their planned capital actions and stress capital buffer requirements. Doing so will provide for a more orderly dissemination of information to the public.”

We did a little digging and it just so happens that Goldman Sachs is set to pay out a dividend of $429.86 million on – wait for it – June 29. That will be its second dividend payment in that amount this year; the earlier one was on March 30.

Would the Fed hold up the dissemination of information critically needed by investors and shareholders just to accommodate Goldman Sachs? A good person to ask might be Carmen Segarra.